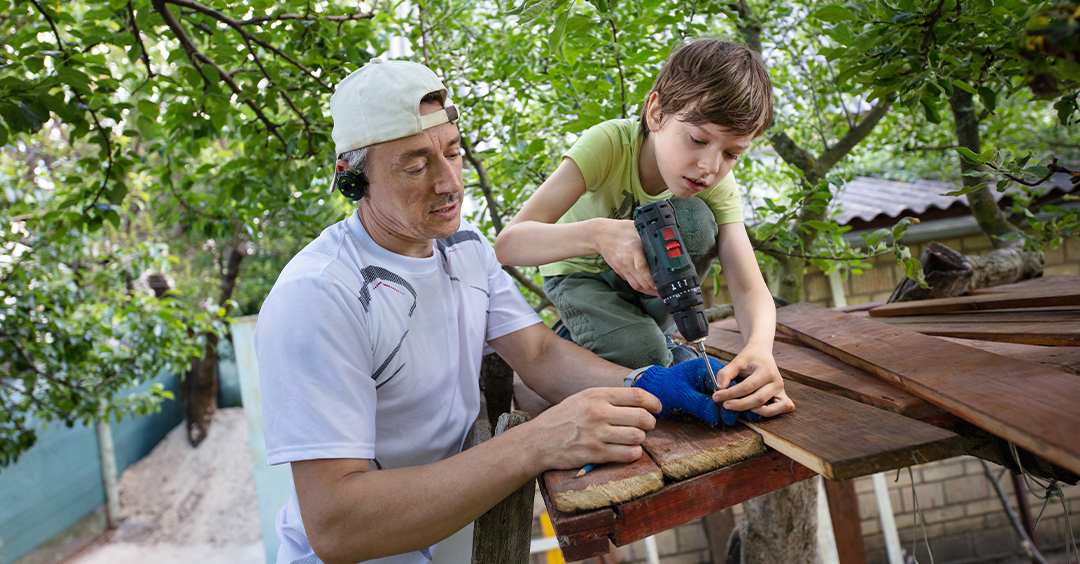 Maybe it's in the testosterone. Guys are just wired to build something; a business, a church, furniture, home improvement projects. Some men build a team, some build financial security for their family, some just build a name for themselves. Even if I've felt motivated to build a few things, I'm the ultimate un-handyman. Like there was this little tree house - well, more like a tree platform - but the kids enjoyed it. The dollhouse for our daughter. The miniature barn for our son. There's a reason that God puts this building thing in guys. Some of us have a really big project to build!

I'm Ron Hutchcraft and I want to have A Word With You today about "How a Father Builds a Son."

When God trusts a man with a son, He is putting in his hands probably the most important building project of his life. If a man builds a mighty empire or a billion dollar enterprise and loses his son, can we call his life a true success? A boy will decide what the word "man" means based on the first one he knows and the one he knows best - his dad. A boy will likely decide what God's like, and whether or not he wants anything to do with Him. Because based on how his dad treats him...because how God has introduced Himself to us as our Heavenly Father.

How a man treats the women in his life; what he thinks really matters...what he thinks really doesn't matter, he'll get that from copying the biggest man in his life - his dad. And how many boys have grown up into men who are never sure they were good enough, always insecure, always feeling like they've got something to prove. Because the main man in their shaping years failed to make him feel loved and confident and valuable. Building a son - that takes a real man. Tearing one down - that's not much of a man at all.

There's a revealing picture of how a father builds a son in our word for today from the Word of God in Matthew 3:16-17. God's Son, is about to launch into the earthly ministry that His Father sent Him to earth for. His first public act is to be baptized by John the Baptist. It's there that we get an incredible glimpse behind the veil at the awesome relationship between God the Father and God the Son. The Bible tells us: "As soon as Jesus was baptized, He went up out of the water... And a voice from heaven said, 'This is My Son, whom I love; with Him I am well pleased.'"

Here's the Father affirming His approval of His Son - a vote of confidence that must have meant a lot to Jesus as He headed out into that battle. It's a demonstration of the power of a father's praise. Of course this is at the highest possible level. It's what your son desperately needs from you, Dad. 1 Thessalonians 2:12 describes in three action words how a father should treat his children, (Here they are.) "encouraging, comforting and urging." The question is, Dad, how do you try to motivate your children; especially your boy? With shame? With silence? By giving love when they perform and withdrawing love when they don't? By never letting them know where they really stand? That's not building a boy. That's dismantling a boy.

He needs your praise - frequently. He needs the kind of focused time with you that says, "I like you, son. I want to be with you." Your son needs your undivided attention when he's talking so he learns that what he says is important to you, just because he's saying it. And often your son needs to hear your compliments, your pleasure, your pride in him. You can give him the courage that he will need to lead, to say no to the pressure, to attempt great things, to treat other people like they're important.

You build a son by building up your son, by often helping him see the awesome thing God did when He created that boy. Even God the Father launched His Son into life with His public approval. How can you do any less for the son He's given you?