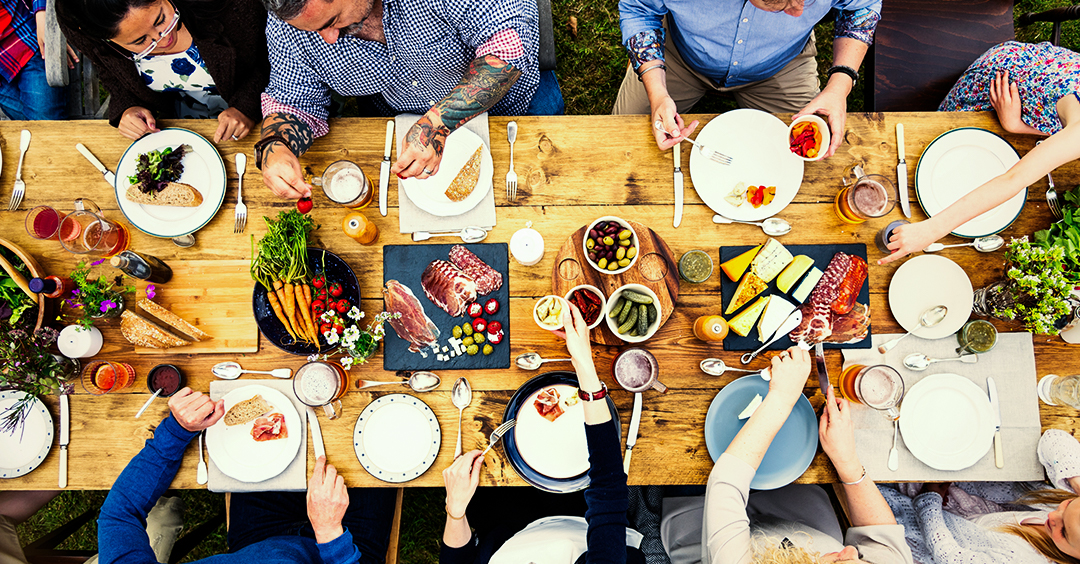 Usually the system works pretty well, except for this one time. My wife and I were at a famous farmhouse restaurant in Amish country - one of those places where they serve you mouth-watering farm cooking. Man, family-style they serve it. We were seated at a table with about ten other guests when the food started to arrive. Actually, most of us had held off eating very much that day so we'd be hungry, and we were. Usually, people take a serving of each dish then they pass it down; that's family style. Right? Not this time. No, there was this one couple at the end of the table who somehow managed to shortstop every platter as it arrived: the fried chicken, the roast beef, the fresh mashed potatoes, the homemade noodles and bread. They would plop this big serving on their plate and then just set the platter down in front of them. They were stuffing; we were starving!

I'm Ron Hutchcraft and I want to have A Word With You today about "Piling it Instead of Passing it."

So the idea is you take some for yourself, and then you pass on the rest to others. Not just at a family-style dinner, but in our lives as followers of Jesus Christ. He doesn't hand us what we have just for us to pile it all on our own plate. He gives it to us to take some and pass on the rest to a needy world.

Paul talks about God's delivery system to the world in our word for today from the Word of God. It's actually in 2 Corinthians 9, beginning with verse 10. "Now He who supplies seed to the sower and bread for food will also supply and increase your store of seed and will enlarge the harvest of your righteousness. You will be made rich in every way" - in other words, He'll trust to you a plateful of goodies from Him - "so that you can be generous on every occasion." Okay, so you can freely pass it on to others.

God's primary method for meeting human needs, for financing His work in the world, for helping the hurting is to give resources to His kids, expecting them to take a little for themselves and then pass on a lot of it to others. It comes from God; it's delivered through us.

Unless, of course, we shortstop the platter of supplies He's placed in our hands. When we do it, we are, in the words of the prophet Malachi, "robbing God" (Malachi 3:10). Sadly, too many of us are aborting God's delivery system by keeping for ourselves most of what He gave to us to give away. God's funds are trapped in our hands, so some of God's army is stuck without the ammunition they need to fight His battles.

I remember our four-year-old grandson got an award at church. Grandma and I couldn't be there for it, so we slipped him two one-dollar bills as our "proud of you" dollars. His first reaction: "Let's go to the Dollar Store!" Actually, he could go twice. But later, on the phone, he informed me of what he had actually done with those dollars. "I gave them to the church." He told me his uncles had each given him two dollars as well. He said, "I gave them to RHM (that's our ministry) so you could tell more people about Jesus."

At four, this little guy understood what many of us have forgotten. It's given to us to share with others, not just to spend on ourselves. In many places, great works of God are nearly paralyzed by growing shortfalls in giving. I don't believe that God, in most cases, is withholding what's needed for His work. It must be that we're sitting on or spending what we were supposed to invest in His kingdom.

Let's all take another look at what we're doing with the plateful, however modest, that God has entrusted to us. Is it mostly building our kingdom or His kingdom? Are we passing it on or just piling it on ourselves?