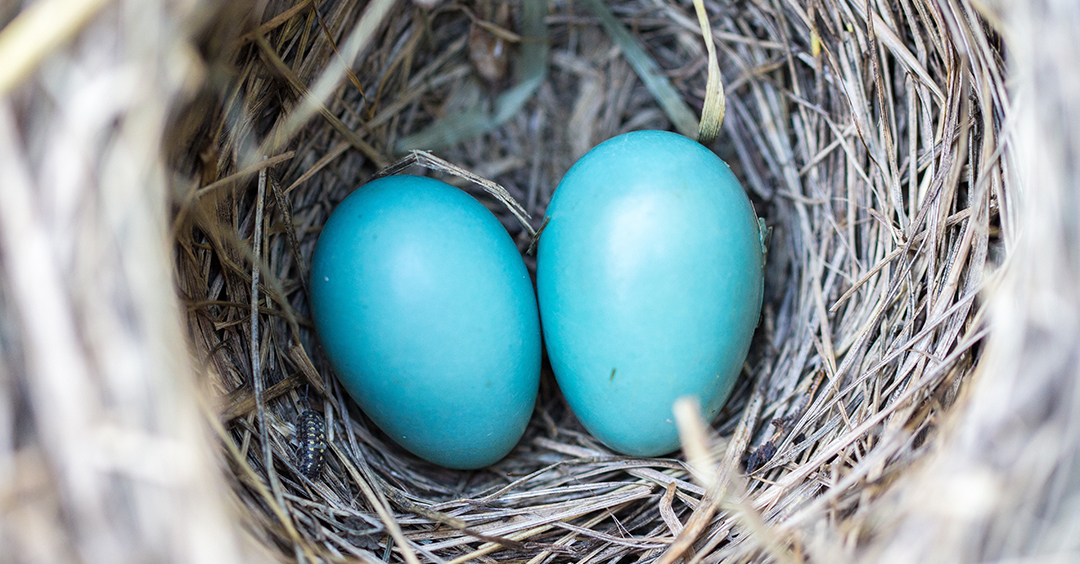 Birds usually build their nests in trees. We had some that tried a creative alternative at our house. While we were on vacation, this mother and father bird built a nest in the exhaust fan for our kitchen range. Problem: the nest was so huge it made the exhaust fan unworkable. Problem two: when we returned from vacation, spiders were hanging down from the hood of the range. Mmm, yum yum. We knew babies had also hatched out up there in that nest. We couldn't see them, but we could sure hear the little noises when they were hungry. We didn't want to kill a whole nest full of babies, so we waited until Mom and Dad Bird had taken the babies out. I got a long stick and I proceeded to take out the nest. But as the nest came out, we discovered a little surprise - actually a big surprise - the fattest baby bird we had ever seen, seated in that nest. My wife went in to get gloves and a box. In the meantime, he got away. How long would this Big Bird have stayed in the nest if we hadn't shaken up his world?

I'm Ron Hutchcraft and I want to have A Word With You today about "Birds and Shaking Nests."

The fact is we believers have a tendency to settle into a comfortable spiritual routine, soak up the teaching, the fellowship, the blessings, and spiritually we're just getting bigger and bigger, fatter and fatter spiritually. One veteran of years under the Soviet system said, "The problem with you Western Christians is that you are over-feeded." Either that, or under-exercised! It's so tempting just to settle into the Christian nest, to define our Christian commitment by what's comfortable, and to settle for being a spiritual consumer but not a producer.

Here's God's stick poking our nest in our word for today from the Word of God. Romans 13:11-12 says this, "The hour has come for you to wake up from your slumber, because our salvation is nearer now than when we first believed. The night is nearly over; the day is almost here." God says, "It's just too late in the game for you to be sitting comfortably in the stands. Time is running out! You need to get out of the stands and get into the game!" Or out of the nest, as the case may be.

Realistically, though, we're often like that large bird. We will not move out of our nest until God shakes up our world. Then we start thinking, "Lord, what are You trying to say to me?" If your world has been stirred lately, some things have been dislodged, let me encourage you to respond by asking that question and by considering whether your Lord is trying to move you where you can make a much greater difference for Him. Lord, what are you trying to say to me by all this shaking that's going on? That restlessness you've been feeling, the un-fulfillment you've been wondering about, the turbulence you've been through, could those be God trying to get your attention; to shake up your life so He can take your life where it's never gone before?

If your nest is suddenly not as comfortable as it was, maybe it's because your Lord is trying to move you out of your nest. Don't be afraid to go where you've never gone, to try what you've never tried, or to attempt what is way beyond you.