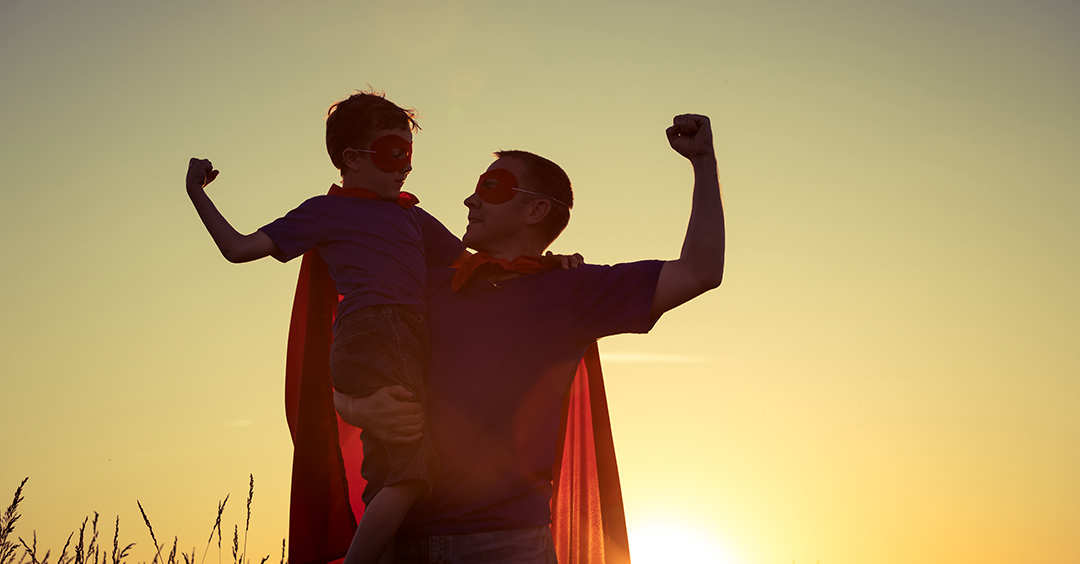 Okay, I'm going to admit it. Sometimes I wear a Superman t-shirt to sleep. That's about as close to being Superman as I'll ever get. As far as leaping tall buildings in a single bound? Sometimes I have trouble getting off the floor.

But in some of the "Man of Steel" movies that were such box office hits, Superman is popping up or landing all over the place. And he would remind me of the sad reality that there really is no such thing as Superman.

I'm Ron Hutchcraft and I want to have A Word With You today about "Trying to be Superman."

Oh, if you're a man, you're supposed to be Superman. Never weak, life's bullets bouncing off you, the fixer, the solver, the answer man, the tower of strength, the conqueror. Above all - the conqueror. Because a man supposedly proves he's a man by conquests, right?. You win in sports, you win in business, in the gym, and with women. I'm learning, though, that those aren't the conquests that ultimately prove your manhood. No, here's the question: "Can you conquer yourself?"

What about that volcano temper that erupts briefly but scars permanently? How about that chainsaw mouth that rips even the people we love. That selfishness that insists "I'm more important than you are." The passions that cheapen sex, imprison your imagination. Those dark feelings that take us to some very bad places. The addiction that's calling the shots.

The Bible presents a man's conquest of himself as decisive in his manhood. In our word for today from the Word of God, Proverbs 16:32, God says, "It is better to be patient than powerful; it is better to have self-control than to conquer a city." And young men are praised for proving that they are strong by the evil they've overcome (1 John 2:14).

Every man has his Kryptonite. Denying our weakness only guarantees it's going to bring us down. Stuffing our pain just hastens an explosion. Pretending we've got it all together only sentences us to a very dangerous strain of lonely. Yeah, manhood is conquest - of myself. And that begins with taking off the Superman mask of invulnerability, admitting when I'm hurting, when I'm not sure, when I need someone.

A lot of men had a dad who always had to be tough, and right, and in control. But the son would have given anything to know if his dad was proud of him...to hear him apologize...to hear him say, "I love you." Even today there are scars from a dad's criticism, a dad's anger.

So I'm seeing now that "man up" may mean something quite different from the macho myths we were raised on. It means being man enough to say three of the most healing words in the English language "I was wrong" or "I forgive you."

Manhood is saying those words we thought showed weakness but actually prove strength. Like, "I need help" and saying them before the explosion comes, before I hurt more people, before I'm hooked and I can't get free. I can't conquer me alone. The man in the mirror is my biggest battle. But maybe if I swallow my stubborn pride, it could be my biggest conquest.

I have to agree with that guy in the Bible who said, "I really want to do what is right, but I don't do it. Instead, I do the very thing I hate. Who will free me?" You can't be rescued until you admit you can't save yourself, and you're willing to pin all your hopes on somebody who can rescue you.

And "who will free me?" Well, the Bible's answers this way: "Thank God! The answer is in Jesus Christ" (Romans 7:15, 24-25). Because the animal inside us - sin, God calls it - can only be tamed by the Man who turned its fury on Himself. That's what Jesus did on the cross, to beat our sin and to be able to forgive us of it having paid our death penalty.

I am one of an army of men who have surrendered our lives to this amazing Jesus. Who've discovered that a man can finally conquer his darkness by being conquered - by the Son of God. I'll tell you how to get started with Him. Just go to our website. It's ANewStory.com.

Jesus has the power to conquer what has always conquered you. And you can trust Him because He loved you enough to die for you.