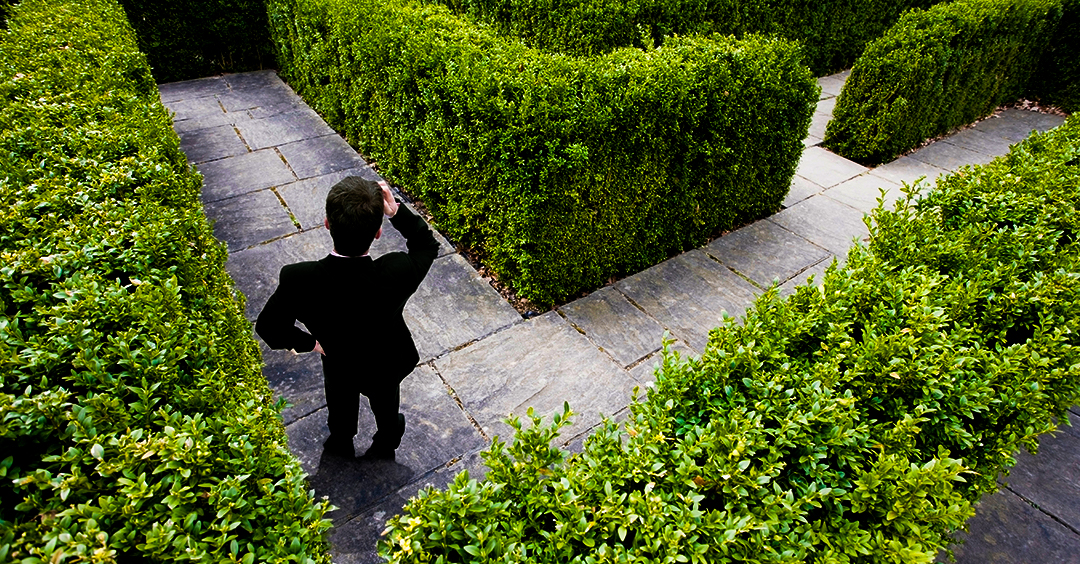 It seemed harmless enough when I entered. I was just a kid at an amusement park in Chicago, and the ride was just this big cylinder that made you feel like you were walking into a washing machine. They called it The Rotor. I stood against the edge and I waited for it to do its thing. Then it started to do what something called The Rotor might be expected to do - it rotated. As it began to spin faster and faster, the floor started to disappear in front of my feet. I was plastered against the side of that cylinder, looking down into this yawning black hole. I hated it. I wanted off. Too bad!

I'm Ron Hutchcraft and I want to have A Word With You today about "Trapped Where You Don't Want To Be."

I read a few years ago in this national magazine a candid interview with a guy that they called at that time "TV's hottest action hero." He was starring in one of the most successful, talked about shows on American television, but he seemed to be on a ride he really didn't want to be on. Too often, his feelings of being as he said "trapped" and "caged," cause it actually caused him to revert to alcohol for some relief. Here's how he felt about it in his own words. "I should be able to wake up in the morning without going, 'Oh, no! Where's my boot?' Or, 'Where am I?' Or 'One of my friends didn't happen to bring my car home, did they?' It's not a very clever way to live, and I don't want to live like that." This admirably successful star went on to say: "I have a few drinks and I'm not so worried about tomorrow and I'm not thinking about yesterday. Then the next day, I go, 'Oh, don't let me do that again.' So why do I do it again, and again, and again?"

His battle echoes the battle raging in a lot of hearts; the feeling of being trapped in a cycle that's going nowhere and leaving us disappointed or even disgusted. It's not a new struggle. One of the writers of the Bible, Paul, wrote these words in Romans 7, beginning in verse 15. It's our word for today from the Word of God. "I do not understand what I do...I have the desire to do good, but I cannot carry it out. For what I do is not the good I want to do; no, the evil I do not want to do--this I keep on doing...Who will rescue me?"

There's a me I want to be, and then there's the me I am. In between is this darkness that I can't overcome. I think we all know that feeling. That darkness has got a name. The Bible calls it sin. We're trapped in a cycle of doing things we know we shouldn't do, treating people ways we later regret--especially people we love, and of handling life in ways that hurt us and hurt other people.

Sin's power could only be broken by a sacrifice that was even more powerful--the death of Jesus Christ, God's Son, on the cross. He gave His life there to pay for my sin and to break its hold on me and on you. Three days later, He demonstrated His supreme power by walking out of His grave. Death couldn't hold Him, and now He stands ready to walk into your life with all that love and all that power so you can be forgiven for every sin and be rescued from sin's cycle of defeat and despair.

But you do have to grab the Rescuer and let Him rescue you. He's waiting to do just that this very day. It's a matter of you talking to Him and saying, "Jesus, I'm tired of my sin. I'm ready to turn from my sin and turn to You as my only hope. You died to rescue me. And here I am." That's how your new beginning happens.

Listen, if you want to begin this incredibly life-changing relationship with Him, would you go to our website? I think it will give you information you need to get this settled. It's ANewStory.com.

Things don't have to be the way they've always been. Jesus died so you could be free, and He's waiting to do for you what only He can do.