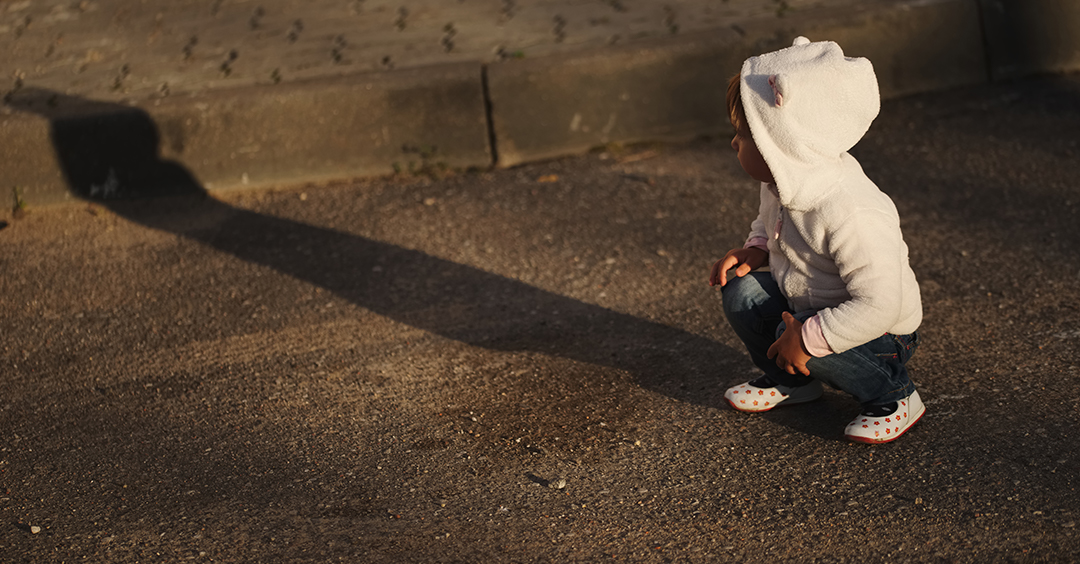 City Boy here is a lot of fun to watch when he's trying to be Farm Boy. My wife and I were helping out in someone else's barn a while back, and the large shadow of something flying came over our heads. I hadn't seen the creatures yet; all I could see was this massive shadow on the wall. I knew my responsibility as a man. That's right, run for help! There was actually no reason to run. When we looked up, we saw what was casting those huge, unsettling shadows: yeah, some little moths, flying around the little light overhead. The shadow was scary; the reality behind the shadow not scary at all.

I'm Ron Hutchcraft and I want to have A Word With You today about "The Shadow that Scares Us."

There's a big shadow that has bothered all of us at one time or another. To be honest, it can be a pretty scary shadow. You see that shadow sometimes when you're in the doctor's office, or when you have a close call, or when you've been to the funeral of someone you know; especially someone who's like about your age. It is, of course, the shadow of death.

The great Jewish king, David, wrote about that shadow in what may be the best known psalm in the Bible, Psalm 23. In the fourth verse of that psalm, our word for today from the Word of God, he says: "Even though I walk through the valley of the shadow of death, I will fear no evil, for You are with me." The "You," of course, is the one David talks about at the beginning of his psalm "The Lord is my shepherd; I shall not be in want." Now, when his loving shepherd leads him out of this life and into what he calls "the house of the Lord forever," he's going to have nothing to fear.

Many folks don't have that kind of peace and confidence about what happens on the other side of their last heartbeat. Maybe you don't. For you, the thought of death and what may be beyond it is more than just a shadow. It's an unsettling, even frightening, reality. Should we be fearful about death and what's beyond? Well, that all depends on where you stand with the God you'll meet on the other side.

In a sense, the only thing to fear about death is God. And we're scared of God. And maybe we should be scared of God, because of the wrong things we've done. He knows every person I've ever hurt, He knows every lie I've ever told, every sin I've ever committed, every promise I've ever broken, every selfish or immoral thought or deed, and every dark secret of my life. There's no way you and I can get into his heaven with our sin. It would ruin heaven.

But there is some awesome good news for us in Hebrews 2:14-15. God tells us that Jesus Christ died on a cross to "free those who all their lives were held in slavery by their fear of death." Wow! See, Jesus actually absorbed all the guilt, all the hell of your sin and mine when He died on the cross. Which means you can be forgiven for every sin of your life, erased from God's book forever.

The Bible says when you put your trust in Jesus to be your personal rescuer from your personal sin, your sins are indeed erased from God's book forever and your name is entered in His "Book of Life" - those who are going to heaven when they die.

So you don't have to wait till you die to know if you're going to heaven. You can know that today, because Jesus is offering to remove the only thing that will keep you out of heaven - your sins. But you do have to grab the nail-scarred hand of the Rescuer and He's reaching your direction today. Tell Him you're His from today on. Tell Him you want to belong to Him. Tell Him, "Jesus, thank you that when you died on that cross, some of those sins you were paying for were mine. I turn from them now to grab you with both hands to be my own Savior from my own sin."

If you're at that crossroads right now, I want to do everything I can to help you be sure that you've got Jesus before you hit the sack tonight. Would you go to our website? Because that's what it's for. It's called ANewStory.com. You'll find there what you need to know to get this settled.

If you don't belong to Jesus, death is a monster that should be feared. If you do belong to Him, then death becomes just a shadow because death is now your doorway to everything heaven offers.