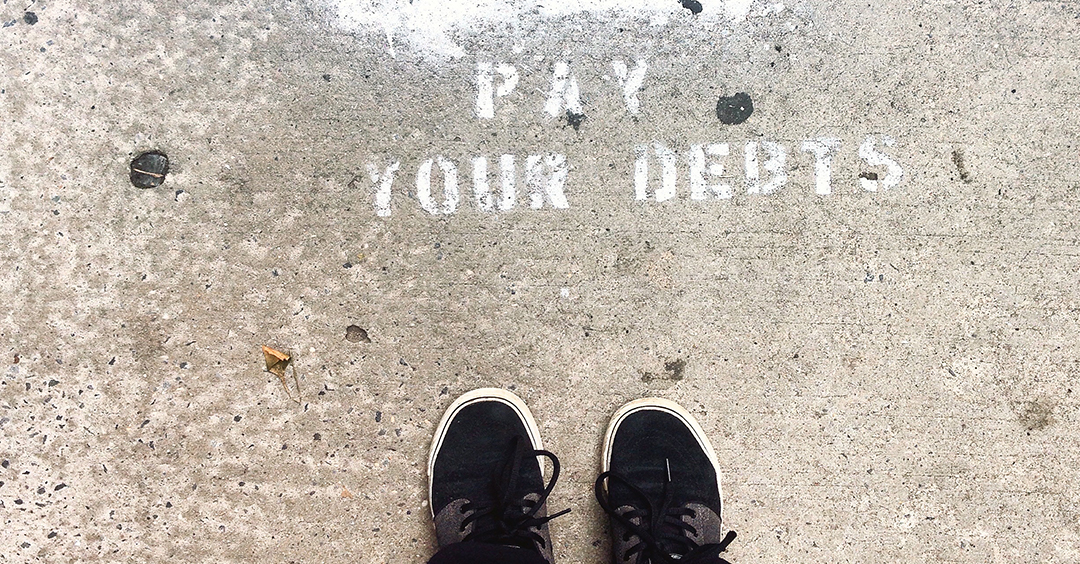 Metal mouth! Yeah, that's what they called my daughter in Junior High. Of course, there were plenty of kids you could call that. Those pre-teen and early teen years? Those are braces years a lot of times. All our kids got to take their turn at braces, and we were thankful, frankly, that we had a friend who was an orthodontist. The work was important, but the bills? They were challenging! Our friend allowed us to pay in installments, but even that was hard sometimes. We still had this large unpaid balance the day our latest bill arrived. We opened it and we couldn't believe the three beautiful words that were stamped across the bill - PAID IN FULL!

I'm Ron Hutchcraft and I want to have A Word With You today about "The Only Payment Plan You Can Afford."

Our word for the day from the Word of God comes from John 19:30. Jesus has been hanging on that awful cross for six brutal hours, He's now breathing His last and it says, "When He had received the drink, Jesus said, 'It is finished,' and with that, He bowed His head and He gave up His spirit." Now, if you were to read that three word sentence in the original Greek language, it's one word, tetelestai.

It's an interesting word that Jesus shouted from the cross. In fact, some archaeologists a few years ago dug up this tax collectors office that was really intact, and it still had the tax records there. There were two stacks and one of them had the word, tetelestai, on the top. In other words "paid in full." Those people didn't owe anything anymore.

Now, Jesus declared that His death was a payment, a full payment! He said, "It's paid in full," the price was paid by the life of God's one and only Son. It was a bill I couldn't pay myself, it's a bill you can't pay; none of us can.

The Bible describes the reason why we have such a massive debt with God. It says, "The wages of sin is death." Now, some of us religious folks will say, "Hey, I don't think that applies to me!" Well, the bad news is, the Bible says, "All have sinned and fallen short of God's glory." Sin is a whole lot more than just breaking some religious rules. It's taking this life God was supposed to run and running it our way instead. It's my way instead of God's way. And the penalty is clear, and it's sobering - it is death - separation from the God who made us now and ultimately forever, and that's hell.

You and I have this overwhelming sin bill with God and eternal separation from God's the only way to pay for it. Our religion doesn't even come close to covering it. But that verse has some good news, the one that says, "The wages of sin is death," it says, "But the gift of God is eternal life." Now, how can that be? It's like my orthodontist friend, the one we owed the debt to declared our bill "paid," in this case, at the cost of Jesus' life. When He was hanging on that cross, Jesus was absorbing every sin we've ever committed and all of its' penalty.

Eternal life is described by God as a gift, and the gift isn't yours until you take it. If there's never been a time when you've told Jesus you're putting your total trust in Him to forgive your sin and get you to heaven, then your deadly sin bill remains on your record this very day. But that could change this very day in these next few moments, if you would tell Jesus you want Him to be your Savior from your sin.

This could be the day that you're forgiven, that you begin your relationship with Him and change your eternal address from hell to heaven. There's some wonderful information I'd love to give you at our website. At this threshold it's for you. ANewStory.com. I hope you'll go there as soon as you can today.

There's this little song that says, "He paid a debt He did not owe, I owed a debt I could not pay, I needed someone to wash my sins away, and now I sing a brand new song, amazing grace, Christ Jesus paid a debt that I could never pay." Well, He's waiting to hear from you. He's waiting to stamp your bill forever "paid in full!"