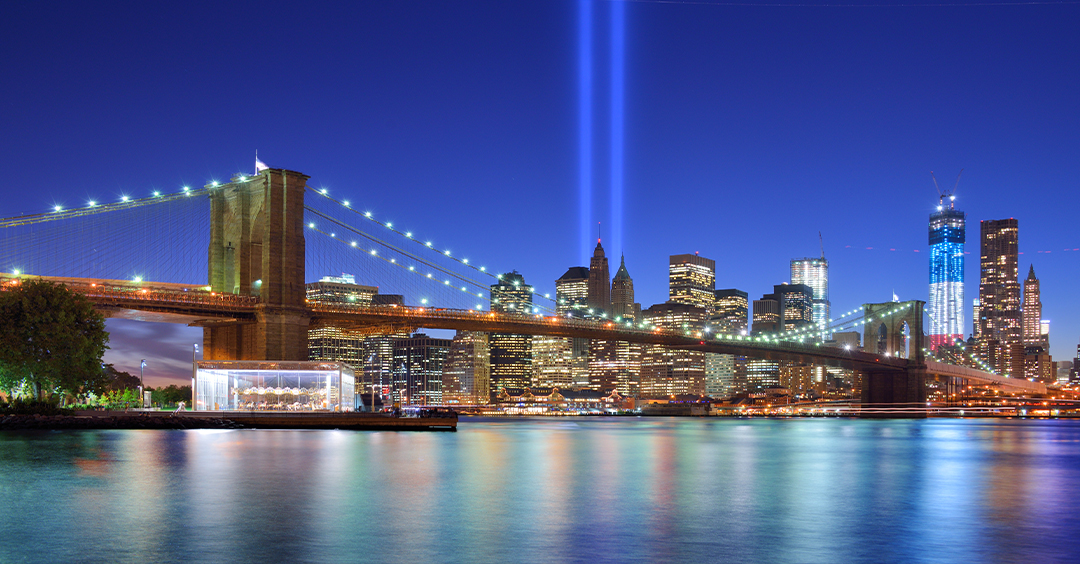 Rick Rescorla was a decorated Vietnam War hero. But his greatest acts of heroism happened years later, on the job at the World Trade Center. As head of security for Morgan Stanley, one of the largest employers in the Twin Towers, he began to take special measures after the Trade Center bombing that happened back in 1993. Suggesting that there might be another attack, possibly coming from the air, he became known as the man who predicted September 11. He began regular drills for Stanley's 2,700 employees in emergency evacuation procedures. Morgan Stanley had offices from the 44th to the 74th floors of Tower Two. When Tower One was hit on that awful September 11, there seemed to be no reason to get out of Tower Two, except for Rick Rescorla's training.

Sixteen minutes after Tower One was hit, a plane crashed into Tower Two. The explosion knocked Rick to the floor. Even there, he grabbed a bullhorn. He yelled for people to stay calm and to head for the stairwells. Then he began to go from floor to floor, looking for people he could save. With both towers now burning out of control, Rick stayed in the building, talking the last of his colleagues down the stairwells. One of the last ones out was a Morgan Stanley executive who said, "Rick, you have to get out of here, too, man." His answer: "I will, John, as soon as we get everyone out." Rick Rescorla died that day at Ground Zero, but only after he had saved the lives of nearly 2,700 people.

I'm Ron Hutchcraft and I want to have A Word With You today about "The Love That Can't Stand to Lose You."

It was Jesus Christ who said, "Greater love has no one than this, that he lay down his life for his friends" (John 15:13). The sacrifice of one man to save many on September 11, has given those people the opportunity to live possibly many more years on earth - 30, 40, 50 more years. The sacrifice of one man on a cross on Skull Hill has given every man and woman on this planet the opportunity to live forever; including you and me. And that man was no less than God's one and only Son. In the words of Scripture, "they crucified the Lord of glory" (1 Corinthians 2:8).

Jesus summed up the unspeakable sacrifice He was about to make in these words from John 10:11, our word for today from the Word of God: "I am the good shepherd, and the good shepherd lays down His life for the sheep." Jesus didn't come just to teach us a wonderful way to live or provide us a great example or start a religion. He came to give His life. And you are one of the reasons God's only Son allowed Himself to be nailed to a criminal's cross. I'm one of those reasons. He loves you so much He doesn't want to lose you.

And why this sacrifice? There was no other way to rescue you and me from the death penalty for the sins of our life. A death penalty can only be paid one way - somebody's got to die. I know who deserves to die for my sins. I do. But in the greatest act of love in human history, Jesus did the dying for every God-defying thing I've ever done and that you've done.

And now He keeps going back to rescue one more from the awful judgment that's coming. Today, even now, He's come to offer you an opportunity to be saved. But it's a rescue you've got to choose by grabbing the Rescuer like He's your only hope. He is. And while you may appreciate Jesus and agree with Jesus, that's not enough to have your sins forgiven. You've got to pin all your hopes on Jesus, like one of those people that was stranded on their roof after Hurricane Katrina a few years ago; wrapping themselves around that rescuer who came from above.

The price Jesus paid for your rescue couldn't have been higher. That's what makes what you do with Jesus so serious in terms of whether eternity means heaven or hell. Your decision about Jesus is your decision about where you're going to be forever.

My prayer is you won't wait another day before you tell Him, "I'm Yours." We've set up our website to help you experience God's love for yourself. Would you visit us there today? It's ANewStory.com.

After the price God paid to rescue you, is it any wonder there's one thing upon which He will base your eternity, "What did you do with My Son?"