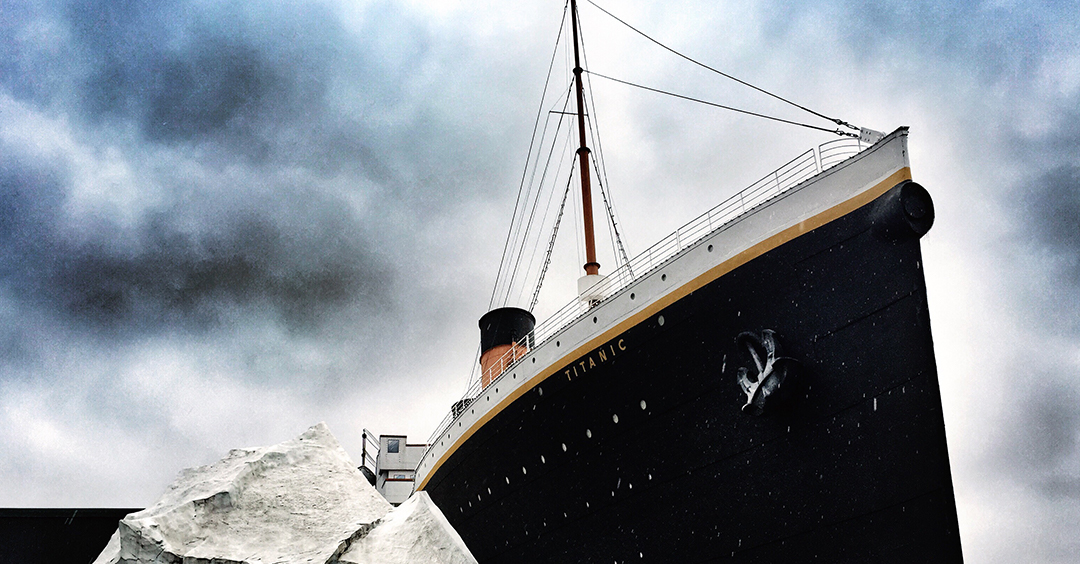 I'm kind of a strange tourist. When I was in Halifax, Nova Scotia, I asked to be taken to a graveyard that overlooks the ocean. There, I walked through rows of these grave markers that have no name but the same date - April 15, 1912. That's the night the Titanic sank, and those are some of its unidentified victims. Not too long ago, the Titanic showed up again on the evening news. Lillian Asplund, the last American survivor of the sinking of the Titanic, died at age 99. It's believed that there might have been just two survivors left at that point, both in England. Those names and the name of every passenger are listed on a big wall at the end of an exhibit I attended called the Titanic Artifacts Exhibit. I got to experience that exhibit as it toured America's great museums years ago. The list indicated whether the person was a first, second, or third class passenger, or a crewman. But no matter what their class, every one of those 2,200 people appeared on one of two lists.

I'm Ron Hutchcraft and I want to have A Word With You today about "The List Your Name Is On."

Every person on the Titanic ended up listed one of two ways: saved or lost. Nothing else mattered. Every person on earth, every person listening, is on one of two lists in God's records. As the last survivors of Titanic have slipped into eternity, they will be "saved" or "lost" forever and so will every one of us.

Our word for today from the Word of God makes the two lists very clear, along with what it is that makes a person either "saved" or "lost." In 1 John 5:11-12, the Bible says: "God has given us eternal life, and this life is in His Son. He who has the Son has life (that's saved); he who does not have the Son of God does not have life (that's lost)." Our eternal destination is all contingent on one thing - whether or not we have the Son of God. Not whether or not we have religion or Christianity, but whether we have Jesus.

So how do you get Jesus? God's pretty clear about that. He says, for example, in John 3:36, "Whoever believes in the Son has eternal life (saved), but whoever rejects the Son will not see life, for God's wrath remains on him (lost)." God's wrath is because of what we've done with the life He gave us. In essence, we've made ourselves God by doing what we wanted to do with our life. Oh yeah, we may have mixed in some religion to try to offset our taking over of our life, but religion in no way can pay the penalty for the hijacking of our life from the Creator of the universe. Sin is a capital crime, punishable by spiritual death; separation from God now and forever.

The Bible says that believing in God's Son, Jesus, can literally change which list we're on. When the Bible says "believe," the word is about total trust, complete reliance. And only total trust in Jesus can rescue us from our spiritual death penalty, because only Jesus could and only Jesus did die in our place. He said, "Father, I will take their hell so they can go to our heaven." He did that for you. That's how much He loves you.

So what's happening right now is so much bigger than you just listening to some guy on the radio. This is a holy opportunity to remove your name forever from the list that says "lost" and put it on the list that says "saved." Your name will be entered in what the Bible calls God's Book of Life the moment you reach for Jesus in total trust as your only hope of going to heaven. That could be today. With eternity in the balance, I can't think of a good reason to risk one more day on the list that says "lost."

We'd consider it such a privilege to do for you what someone did for us one day. They explained to us how to begin this relationship with Jesus. Well, that's what our website does. So I want to ask you to go there. It's ANewStory.com.

I'll leave you with just how the Bible describes what could happen to you this very day. It says that the man or woman who opens their life to Jesus "...has eternal life and will not be condemned; he has crossed over from death to life!" (John 5:24). This could be that day for you!