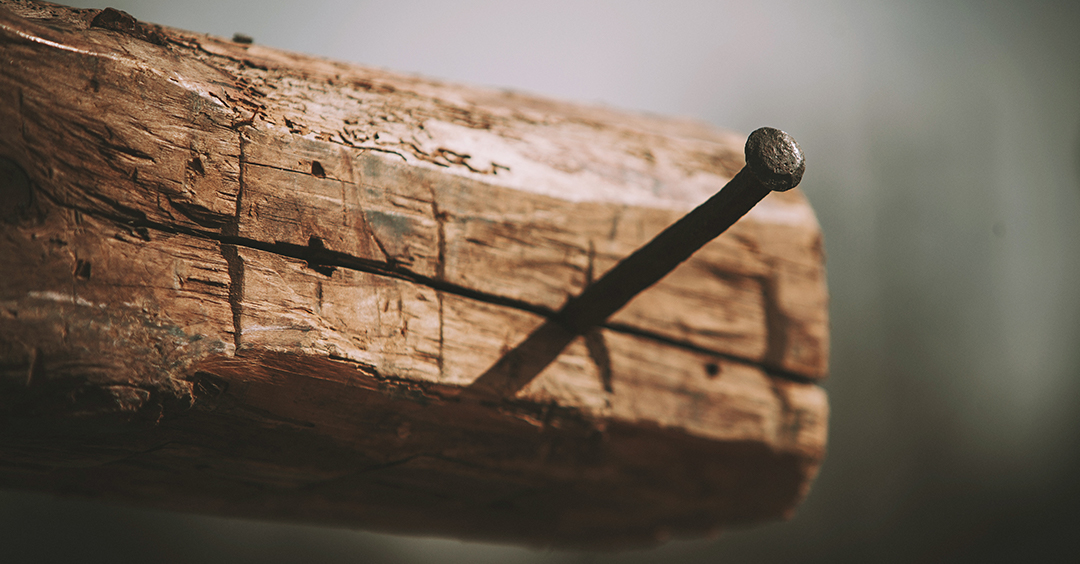 Most of us don't have a friendly neighborhood blacksmith anymore. Some of us city folks might never see one if they didn't have them at historic sites and some old-time American theme parks. I'm pretty sure the first blacksmith our three-year-old granddaughter ever saw was the one at the park we took her to. When we stopped by the blacksmith's shop, we were the only ones there. Our granddaughter was really interested in his fire and how he pounded those hot, shapeless metal things into useful objects. Later, as we started to leave, Mr. Blacksmith stopped us. Even though he does some pretty tough work, he's obviously a caring man. He caught up with us because he wanted to do something special for our little girl - he handed her a nail that he had just made. She wouldn't let go of that nail for most of the rest of the day. And last I knew, it was still one of her treasures.

I'm Ron Hutchcraft and I want to have A Word With You today about "The Evidence You Are Loved."

Our granddaughter carried a reminder of a blacksmith who took a special interest in her - the evidence was a nail. It's hard for me to think about that without thinking of the man who demonstrated His love for me with the same kind of evidence - a nail. Actually, three nails - the two they drove through His hands and the one they drove through His feet when they hung Him on a cross.

Jesus brought back to heaven only one thing from His visit to earth - the nail prints in His hands and feet. They are the unarguable evidence of how very much Jesus loves you. I don't know what your experiences with love have been in your life. Maybe you've been blessed to have lots of love over the years. You can still be missing the love you were made for - the love on which your eternity depends - the love of Jesus Christ. Or maybe love - or the absence of it - has been the source of a lot of hurt and disappointment in your life. Because we tend to expect from God the same kind of treatment we got from humans. Well, it just might be hard for you to believe that the greatest person in the universe deeply loves you.

Consider the nails. Consider His wounds. It was, in fact, the sight of those wounds that drove a man named Thomas to throw open his life to Jesus. Thomas had followed Jesus for three years. He had heard all the sermons, seen all the miracles, but apparently he had withheld his total commitment. When Jesus came back from the grave and appeared to all the disciples but Thomas, Thomas said he would not believe that Jesus was alive unless he touched the wounds from His death on the cross. When Jesus appeared a second time with Thomas in the room, He invited the doubter to come and touch the holes the nails and the spear had left. All Thomas could do was fall on his knees and cry out, "My Lord and My God." (John 20:28).

The awful punishment that Jesus submitted Himself to was, in reality, the punishment for my sin and for your sin. And the worst punishment wasn't what people could see. It was the Son of God being totally cut off from God the Father as He carried all the horror and all the hell of all our sin.

The certainty of His love is powerfully expressed in Isaiah 49:15-16, our word for today from the Word of God: "Can a mother forget the baby at her breast and have no compassion on the child she has borne? Though she may forget, I will not forget you! See, I have engraved you on the palms of My hands." Every time Jesus looks at His hands, He thinks of you and me because His love for us is engraved there in the print of the nails.

That's why it's so unforgivable to reject His love. You may not mean to reject Him, but if a gift is offered to you and you just sit there, you've rejected both the gift and the giver. Jesus is holding out to you eternal life in heaven; the forgiving of every sin of your life. The greatest mistake a person can make is to fail to respond to this love of Jesus. If you've never actually given yourself to this Savior who gave His life for you, don't risk one more day without Him. Today, tell Him , "Jesus, I am Yours."

We've set up our website as a bridge where you can go and find the biblical information that will help you be sure you now belong to Jesus. That website is ANewStory.com.

Jesus has been reaching for you for a long time. Isn't it time you grabbed His hand?