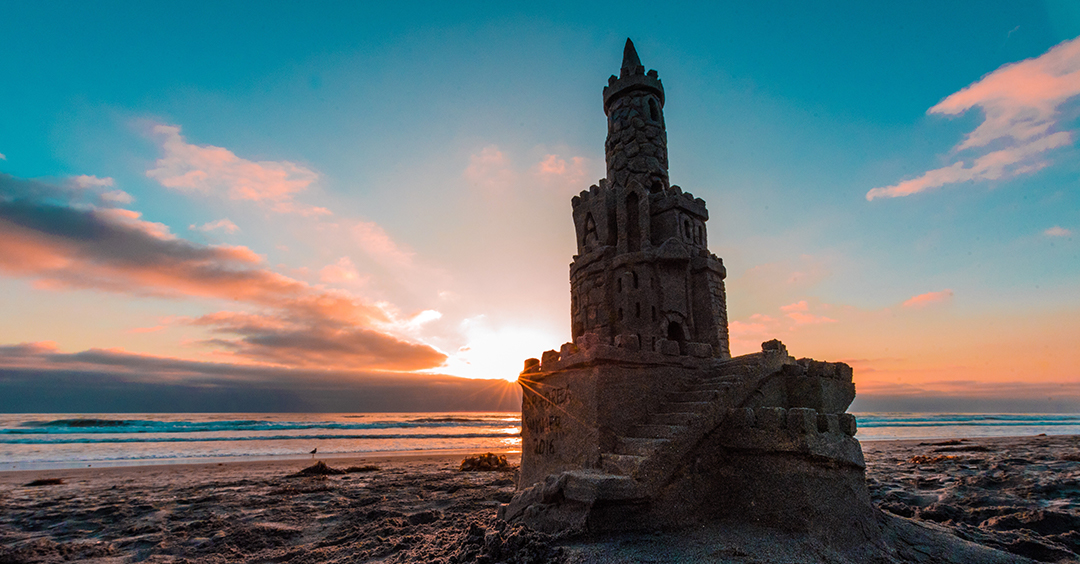 Ocean City, N.J. - actually "memory City" for our family. Like the large, annual youth conference I used to speak for there. One of the favorite activities of the week was a sandcastle competition where delegations from all over competed to see who could win the coveted prize for best sandcastle. And you should have seen the masterpieces they created! They were massive, creative, detailed - little empires made of sand. Of course, they made them at low tide. It was kind of depressing to go back there a few hours later at high tide. Because no matter how elaborate, how imaginative, how brilliantly designed they were, they were gone. They just couldn't survive the onslaught of high tide.

I'm Ron Hutchcraft, and I want to have A Word With You today about "Sandcastles and Our Sudden Storm."

It's been pretty traumatic to see how little control we really have over our lives. How insecure our security is. How quickly everything can change. It's left us shell-shocked...afraid...depressed...lonely...feeling lost. It turns out that the security, the little kingdom we've been trying to construct was basically a sandcastle. Something in which you invest a lot of effort that turns out not to last.

Maybe in a way this viral storm, though, has done us a favor. It's revealed how fragile the things we've pinned our hopes on really are. And given us a desire in our soul to find something that we can really count on. And depend on. One time, Jesus told a story about two men who were each building a house. One on rock, the other on sand. Side by side, I imagine they looked pretty much alike. Until the storm came. In our word for today from the Word of God in Luke 6:47-49, Jesus said one man represented the person who builds his life on something other than Jesus. He said, "He is like a man who built a house on the ground without a foundation. The moment the torrent struck that house, it collapsed and its destruction was complete." Maybe that captures a little of how you've been feeling since the corona storm hit.

But, according to Jesus, the man who built his life around Jesus had a different outcome: "When a flood came, the torrent struck that house but could not shake it, because it was well built." Honestly, that's what happened on the worst day of my life - the day my wife, the love of my life, was suddenly gone. And while the storm was brutal, the Jesus who I've entrusted my life to was the anchor that held. The Bible says this, "We have this hope as an anchor for the soul, firm and secure" (Hebrews 6:19). I want that kind of security and peace for you. God wants it for you even more.

So much that He sent His one and only Son to literally die for you and for me. For every wrong thing we've ever done. For us hijacking our life from the God who gave us our life. The Bible says, "He was crushed for our sins...and the punishment that brought us peace was upon Him" (Isaiah 53:5). But this is not a religion that worships a dead Savior. This is about a relationship with the only Man who ever conquered death by blasting out of His grave - and that's Jesus.

If you're ready for the relationship with Him that will forgive your sin, guarantee you heaven and never fail you, no matter how brutal your storm is, this is your day to tell Jesus, "Jesus, I'm Yours." I've set up our website to help you do just that - I hope you'll head there soon today and check it out. It's ANewStory.com.

I've stood on the massive boulders at Ocean City that stick out into the raging tide. The storms have come and gone. But the rock still stands. For you, that rock is Jesus. Your one safe place.