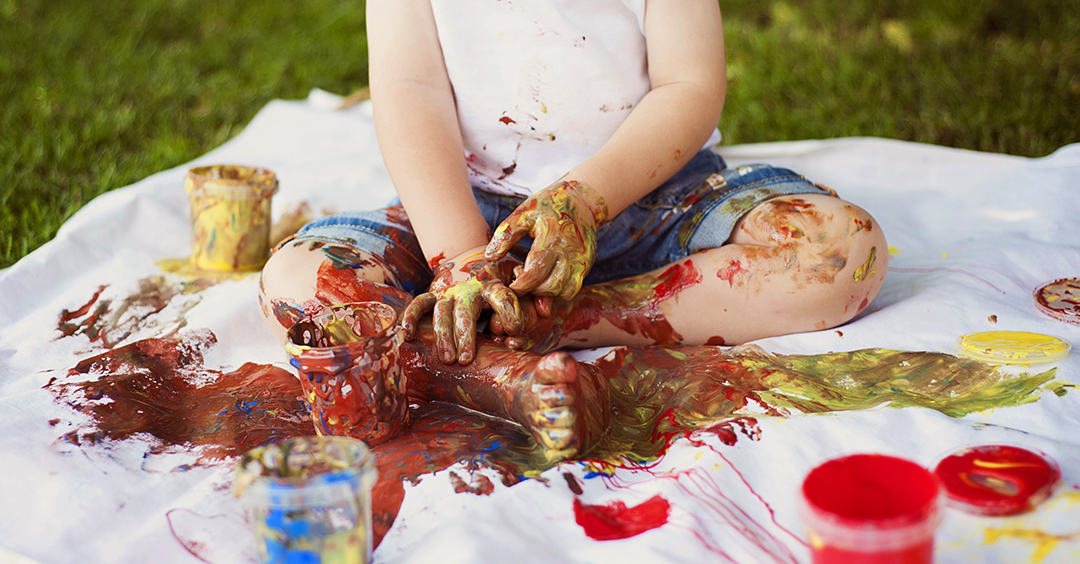 It was a simple order, "Get dressed." When Mom said it, our five-year-old grandson did what she asked. Moments later, he emerged from his room dressed for the day. That's good. It wasn't until he was undressing that night that Mom noticed a slight anomaly in how he had gotten dressed. He had two pairs of underwear on! When Mom asked him about it, he answered with a bemused look on his face: "Oh, I just put clean underwear on over the dirty underwear." Not good.

I'm Ron Hutchcraft and I want to have A Word With You today about "Putting Clean On Over Dirty."

Unfortunately, that is an all too common practice among God's children that is. Instead of taking off some things in our life that are dirty, we keep those and just put some clean stuff over the dirty. It may make you feel better about the dirty stuff, it may be covered up from most people, but the dirty is still there. And you've got trouble with God.

There's a game all too many of us church folks play. It's described in Isaiah 29:13-15. It's our word for today from the Word of God where "The Lord says: 'These people come near to Me with their mouth and honor Me with their lips, but their hearts are far from Me ... Woe to those who go to great depths to hide their plans from the Lord, who do their work in darkness and think, 'Who sees us? Who will know?'" Of course, God knows. He's not impressed with all those Christian words we say and Christian meetings we go to and the Christian causes we support. He's interested in what's really going on in your heart, in the real you.

There are a lot of nice people who have some very not-nice things going on beneath the nice. Nice Christians who are poisoning their soul with pornography, seemingly unaware that Jesus is standing there all the time. Nice Christians who still have a serious problem with their temper, whose rage is so hurtful, but known only to a few. There are nice Christians who are hiding a pattern of abuse, or a heart full of bitterness, a life of lying, a relationship that our culture calls an affair but God calls adultery, a secret but sinful addiction. Maybe they're covering up an agenda of revenge, or sex outside of God's fence of marriage; so many secrets Christians cover with a layer of clean.

Maybe the lie we want to believe is that the good we put on over the bad somehow excuses or makes up for the bad. Not with a holy God. That's a lie that may stave off the judgment of your own conscience but it will only compound the judgment of God. And about it being a secret, Romans 2:16 describes the day "when God will judge men's secrets through Jesus Christ." If you're covering up sin with spiritual stuff, you are sponsoring an unholy coexistence that is an insult to a Savior who gave His life on the cross (it says) "so that we might die to sins", (1 Peter 2:24) not hide our sins.

In Ephesians 4, God commands us to "put off your old self" and "to be made new," to "put on the new self." It goes on to tell us to put off lying and put on truth, put off trash talk and put on uplifting talk, put off anger and bitterness and put on forgiveness and compassion, put off any kind of sexual immorality and put on purity.

So you are at a crossroads. God brought us together today to tell you that covering up your dirty with a layer of clean isn't going to cut it. It's self-deception. It's living a lie. It's defying God, and it's building up judgment. Don't you think it's time to come clean even if it hurts? It will hurt a whole lot more not to come clean. You know you're sick of that battle inside you. It's tearing you apart-the guilt, the fear of getting caught, the shame. And you know God is sick of this charade, too.

While God is speaking to you, while your heart is open to the truth, right now run to that cross where everything you're hiding was paid for with the blood of Jesus. If you've never been there to get the sins of your life forgiven, you could be clean today. Don't miss what He died for. Today tell Him, "Jesus, I'm yours. You're my only hope of forgiveness."

Go to our website. It's called ANewStory.com because it's where your new story could begin. The information is there that will help you belong to Jesus and know you do.

Leave that dirty stuff, once and for all, at the foot of His old rugged cross.