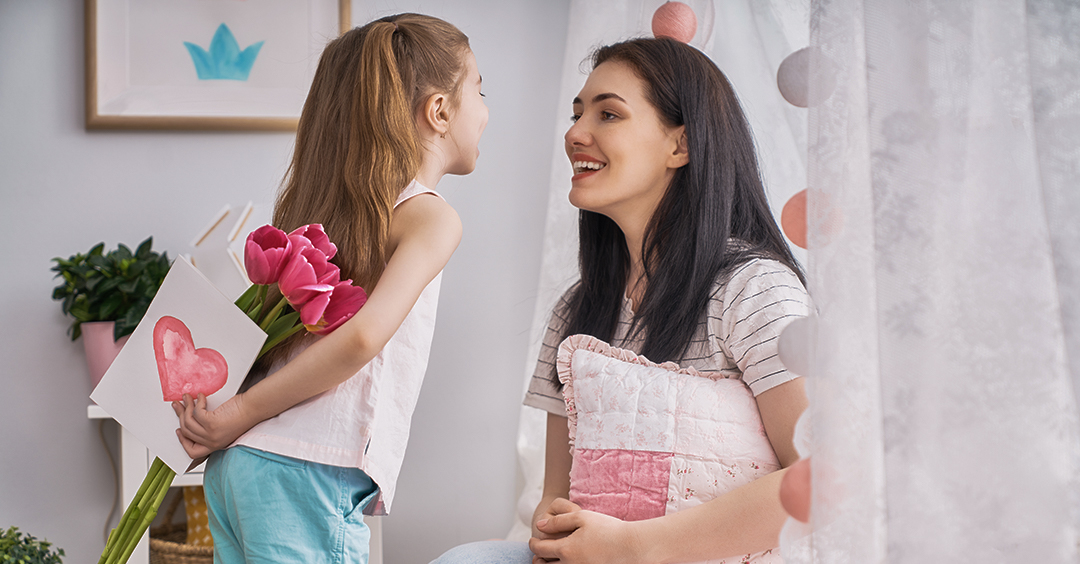 Nine years old and I was oh so proud! I was proud of the gift I had just bought for my mom for Mother's Day. I picked it out myself. I paid for it with my own allowance. And I ruined it all by myself. It was a two-carnation corsage with a plastic bumblebee. I still remember it - it was really cool, especially the bumblebee. I was pushing the speed limit on my bicycle with the white florist box perched on my handlebars. You've probably got the rest right? I hit a bump, it went flying, I ran over my Mother's Day present. The flowers were crushed and so was I.

I'm Ron Hutchcraft and I want to have A Word With You today about "Mom's Greatest Gift."

Maybe that's why I love the idea of a crushproof Mother's Day gift. And there is one. It might be the greatest gift Mom could ever receive. And it's intimately tied to an amazing gift a Mom can give her son or daughter. I know. If it weren't for those two gifts, the wife I've loved all these years might never have been born.

Bill was the apple of his mother's eye. He had a great job, a good income, and an insatiable appetite for alcohol. From the time he was nine years old, Bill entertained the men at the local store by lapping booze from a saucer like a kitten.

By the time Bill was in his 20s, his drinking cost him his great job, his dignity and almost some of the people he loved. After drinking heavily one night, he actually returned home, flew into a rage and chased his sisters with a butcher knife. Later, his drinking - and then his cocaine use - took him to jail and then federal prison. You talk about hopeless. Except for the gift his mother gave him - her relentless prayer for him. In 1907, Bill's mama wrote this on the back of a picture of him, dressed so fashionably at the time: "Will, O dear Will, when will you cease from your wandering ways and return to Jesus Christ? You may see this long after I am gone from this earth, but may you know that your mother always prayed for you."

One night those prayers reached all the way to her "Billy Boy" as she called him, walking down Chicago's South State Street. He was heading for Lake Michigan - he wanted to end his life that night. Then he heard the music - a hymn he remembered from his childhood. It was coming from a rescue mission. And it drew Bill inside. There, a mission worker reached out to him with these words that are our word for today from the Word of God, John 3:16. You may have never heard them before; you may have heard them a thousand times. Listen like your life depends on it. It does. "For God so loved the world that He gave His only begotten Son that whosoever believeth in Him (that's how they said it that night) shall not perish but have everlasting life."

On the night Bill planned to end his life, he gave his life to Jesus. And he would say, from that day on, "I was not a reformed man - I was a transformed man." He spent the rest of his life traveling this country, telling people about the Rescuer of "hopeless" lives. Living in a trailer, his "Little Church on Wheels" he called it, with John 3:16 emblazoned on the side. His Mama actually lived to see the miracle she prayed for. She saw his transformed life for ten wonderful years before she went Home to Jesus. She gave her son the gift of her never-give-up praying. And he gave her the greatest gift of all. He gave her a child who loved and lived for her Savior.

Without those gifts, my wife would not have ever been born. Because Bill - that young man saved by Jesus minutes before he planned to die - was her grandfather. The mother would not give up praying for her wandering child. As a result, she experienced the miracle a widowed mother long ago experienced at the funeral of her only son. Jesus touched that coffin and commanded her dead boy to "get up!" "The dead man sat up...and Jesus gave him back to his mother" (Luke 7:14-15). He is still the Savior who gives back lost sons and daughters to a mother who loves them.

Maybe you're the son or daughter of a praying mother, but you've never given your heart to Jesus. He's waiting with open arms to welcome you so you can see that mom someday again. If you don't know Jesus, go to our website and find out how. ANewStory.com.

It's time to come home.