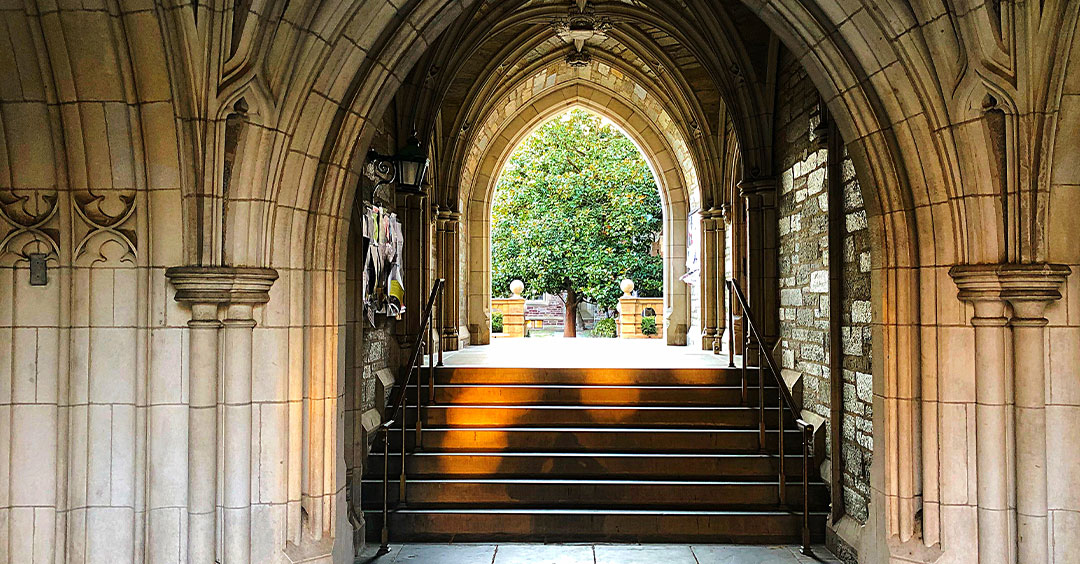 I have two adult friends who own Princeton University sweatshirts. Al has one because he put in four very challenging years at the university and he graduated from there. And the other day I met a friend, Dave, at the grocery store, and he had his Princeton University sweatshirt on. I said, "I didn't know you went to Princeton?" Well, you know me; I get most of my exercise jumping to conclusions. No, he informed me that he had bought that shirt at a discount store for $12. He said, "Oh, I didn't go to Princeton, I just wear the shirt!"

I'm Ron Hutchcraft and I want to have A Word With You today about "Looking Christian - But Lost."

Now, in Luke 6:46 Jesus is talking to believers, I think, and He says, "Why do you call Me 'Lord, Lord' and do not do the things that I say?" Now, you know, these folks had the right vocabulary; they knew to say "Lord" but something had happened to their commitment. It was just words.

My friend, Dave, who had just bought the shirt at the discount store, he hadn't really paid the price that goes with identifying with Princeton. Now, when Al, who graduated from there, wears the shirt, it's backed up by years of sacrifice and work. Maybe you're proud to wear Jesus' shirt, but you're not paying the price of living consistently for Him. You've got the shirt, but you've not got the life that backs it up.

You know, Alexander the Great was trying a young soldier in his tent who had been accused of cowardice, and he brought this young man in and he said, "Now, young man, what were you accused of?" And the soldier said, "Sir, desertion in battle." And Alexander leaned forward a little bit. He said, "What's your name?" And the young man very hesitantly said, "Sir, it's Alexander." And at that point the General leaped to his feet, pulled him up nose to nose and he said, "Young man, either you change your life, or you change your name!" Wow!

Now, our word for today from the Word of God comes from Matthew 7, and I'm going to begin reading at verse 21. I have to tell you, for me these are some of the most unsettling verses in the Bible. Jesus is speaking: "Not everyone who says to Me, 'Lord, Lord,' will enter the kingdom of heaven, but only he who does the will of my Father who is in heaven. Oh, many will say to Me on that day, 'Lord, Lord, did we not prophesy in your name, and in your name drive out demons, and perform many miracles?' Then I will tell them plainly, "I never knew you." Man, those words have to be some of the most chilling words in the Bible, "I never knew you."

Now, if we want to go back to my friend who was just wearing the Princeton shirt, we might say spiritually here that these are the people who are not only wearing the shirt; they have a complete Christian wardrobe. In fact, it sounds like these may be Christian leaders who are before the Great White Throne Judgment, and they're going before the Lord. Some of them have worked for Him; they've preached and done miracles. These aren't just back pew sitters. Yet, Jesus is basically saying here that it isn't the one who says all the right words, "Lord, Lord." It's the one who does His will. And later He will say, "It is the will of my Father in heaven that everyone comes to Him through Me."

It's possible that you have Christianity but you've missed Christ; there's never been that moment when you've personalized what He did on the cross. And every day you wait puts you deeper and deeper into the spiritual danger zone.

Listen, today make it real. Tell Jesus, "Finally I want to move You from my head to my heart. I don't want to just believe about You, I want to believe in You; I want to commit myself to You. Go to our website as soon as you can today. I think it will help you get this settled. It's ANewStory.com.