your most important relationship hebrews Galatians 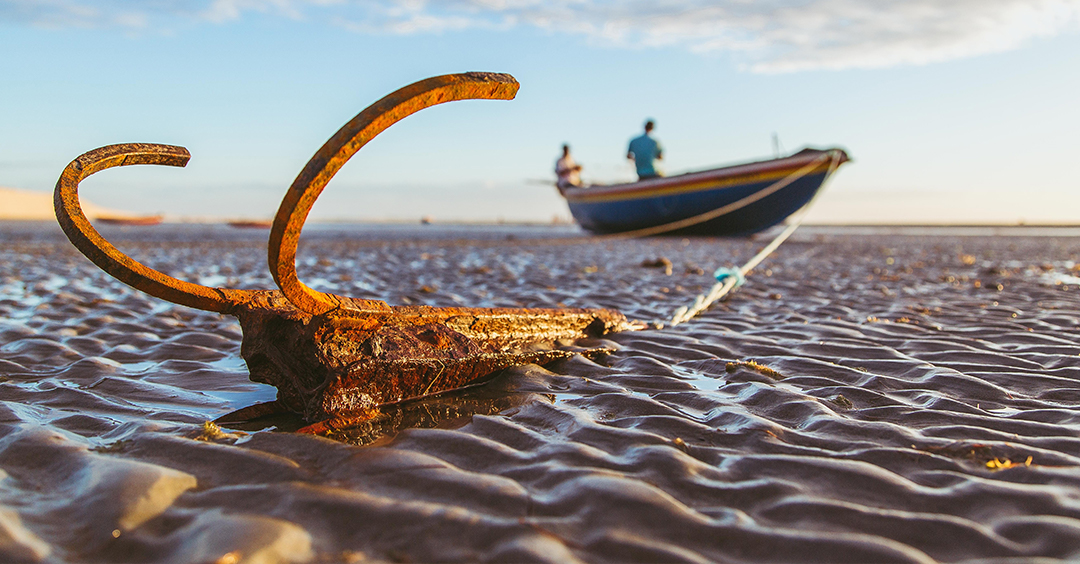 It started on a family vacation in Southern California. The kids were asking about earthquakes which were not a part of our regular growing up years in New Jersey. We started this whimsical little exercise where I would yell, "Earthquake drill!" Now, invariably our older son would run over to his older sister and he would hug her. I would ask innocently, "What are you doing?" to which he would reply, "Dad, you told us to hang on to something heavy!" Oooh, she wasn't, but I'll tell you, that boy was lucky he lived to have a sixth birthday! Actually, when things are shaking, it's really a pretty good idea to hang on to something heavy!

I'm Ron Hutchcraft, and I want to have A Word With You today about "In Search Of the Anchor."

There was a pop culture analyst some years ago who released a book, and was a guest on the same radio talk show that I was a guest on. We got to talk for a few minutes and I was introduced to what was then her new book. I guess she had a name that was pretty well known to people who are involved with marketing in the country. In fact, Fortune Magazine called her "the Nostradamus of marketing." Because she had had a phenomenal track record for predicting the trends that were going to affect our businesses, our families, and our lives in the future. In this particular book she listed several trends that she thought would shape our futures. One that particularly intrigued me was anchoring. She described our search for something we can count on to anchor our lives in an increasingly uncertain and unpredictable world. Let me quote a few things. "There is a new trend about the inner spirit called anchoring. The search for life's anchor is a must for filling the void that so many are feeling. We're looking for ourselves - our lost souls. A relationship with the divine may be the ultimate expression of anchoring."

Does that sound like anything that's going on inside of you recently? I think we know that the anchor is going to be a person; it's going to be a relationship. We're looking for that anchor relationship that we hope will be, let's call it unloseable. But the word "anchor" would not describe our relationships for the most part today, would it? Relationships might be better described as superficial, disappointing. We've never needed a count-on-able relationship more, and it's never been harder to find. The result? There's just a deepening loneliness.

See, with our need for an anchor in mind, I want to ask you to listen to our word for today from the Word of God in Hebrews 13:5. "God has said, 'Never will I leave you, and never will I forsake you." What a promise! Love that will never leave you abandoned and never alone. Do you trust this promise? Yeah, you can because of the price God paid to make it.

Paul, one of the writers of the New Testament talks about it when he tells about the new anchor in his life. He says in Galatians 2:20, "I live by faith in the Son of God, who loved me and gave Himself for me." The Bible says that the one and only Son of God came here to deal with the ultimate cause of our loneliness. We're lonely for God. Because of our sin we're away from that God, the one who alone can fill the spiritual hole in our heart. That's why no earth relationship has ever been enough.

The only way for us to have access to God's great love was the death penalty for our sin had to be paid. That's what Jesus himself did when He died on that cross so you could say, "He loved me, and gave Himself for me." When you commit yourself to this Jesus, the sin wall between you and God comes down and you have begun the anchor relationship you were made for...that you've been looking for. The Bible says, "We have this hope as an anchor for the soul, firm and secure."

Do you want that? It's time to begin that relationship today. Would you tell Jesus, "I'm yours from this day on. I'm pinning all my hopes on you." In the words of a little boy, you're going to "Hang onto something heavy from now on. Someone who will never leave you."

Our website is there for you with the information that will help you be sure you belong to Jesus. That's ANewStory.com.

If you'll anchor yourself to Jesus Christ, you have just spent your last day alone!