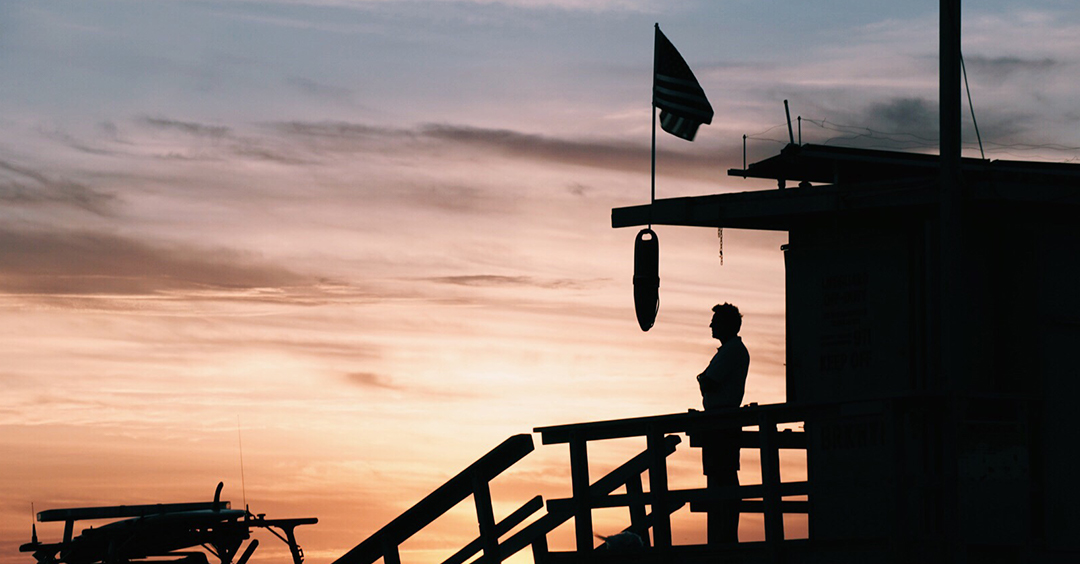 I have a ton of respect for lifeguards at the ocean. I mean, first of all, I wish I could swim like they do; they make what I do look like dog paddling for sure. But I have seen them in action. I remember being at the New Jersey shore and watching five lifeguards go to work on a rescue to bring in three children. And I think I have a new appreciation for these guys and girls having talked to my friend, Jim, because he used to be one on the other side of the country; he was a Pacific Ocean lifeguard. He described to me the different kinds of rescues that there are.

For example, what do you do when there's someone who is panicky, hanging onto you for dear life and almost going to take you down? Well, lifeguards are trained a certain way to handle that. My friend told me, "There's one they call 'the hard rescue'" and for good reason. But you don't have to be in the ocean to be a candidate for some strong treatment from The Life Saver.

I'm Ron Hutchcraft and I want to have A Word With You today about "Hard Rescues."

Okay, our word for today from the Word of God is about a hard rescue, and it's in Genesis 19; I'm going to begin reading at verse 14. It comes out of the story of the life of Abraham's nephew, Lot. Maybe you remember that Lot had gotten stuck in Sodom, that sinful city that God was about to destroy, and not only had he moved into Sodom, but well, Sodom had moved into him. And the angels of the Lord had come and said, "Lot, you need to get out of here and get everybody you love, because Abraham has prayed to get you out of here."

Well, here's where we pick up the story: "So Lot went out and spoke to his sons-in-law who had pledged to marry his daughters. He said, 'Hurry and get out of this place, because the Lord is about to destroy the city.' But his sons-in-law thought he was joking." What? Now, isn't it interesting that when you get compromised as a believer, your credibility is shot when you try to warn anybody?

"With the coming of dawn," it said, "the angels urged Lot saying, 'Hurry, take your wife and your two daughters who are here or you will be swept away when the city is punished." And he hesitated! So the men grasped his hand and the hands of his wife and his two daughters and led them out of the city."

Lot literally had to be pulled out of the city of Sodom, where if he had stayed he would have been destroyed. Lot was about to die, but he was hesitant to go with the Lord. Sounds a little bit like the hard rescues that my lifeguard buddy, Jim, described to me. He said, "When you have a man who thinks he can handle it; he doesn't even think he's drowning, he won't admit he's drowning, he keeps fighting and he's going down for the third time. He's going to die if you don't rescue him." And Jim said those lifeguards were trained to literally punch him and knock him out; not because they wanted to be violent, but to save his life. Knock him out to save him.

Has it ever occurred to you that, well, maybe you, like Lot, might be a hard rescue? You're on a destructive road right now, but you refuse to admit that you're going down for the third time. You say, "Hey! Hey, I can handle it." But you can't! You're not supposed to handle it. The Lord's been trying to bring you to the cross where Christ died for you, or maybe you've been there and you're a Christian who's rebelling; you're living outside of His best. It's not the church you're rebelling against, it's not your parents, it's not some other Christians who hurt you or disillusioned you.

It's Jesus Himself, and the most loving thing God can do is to bring you home like a lifeguard. He's called to you, He's brought people into your life to bring you back, He's allowed you to be frustrated in your lifestyle, He's reminded you and you've said, "God, leave me alone!" Well, if God doesn't do something drastic, you may be lost forever.

And so perhaps He has brought things into your life that have been there to get your attention, to give you a little pain now so you can be rescued from the pain of a Christless eternity. Would you let the lifeguard save you? He died to do it! Grab Him with everything you've got. Let down your guard. Let Him bring you home safely.

Maybe today is going to be God's loving knock-out. Don't force Him to escalate His rescue efforts. There's no peace, there's no rest, there's no fulfillment until you collapse into His arms. Please, let Him carry you safely home. Don't be a hard rescue!