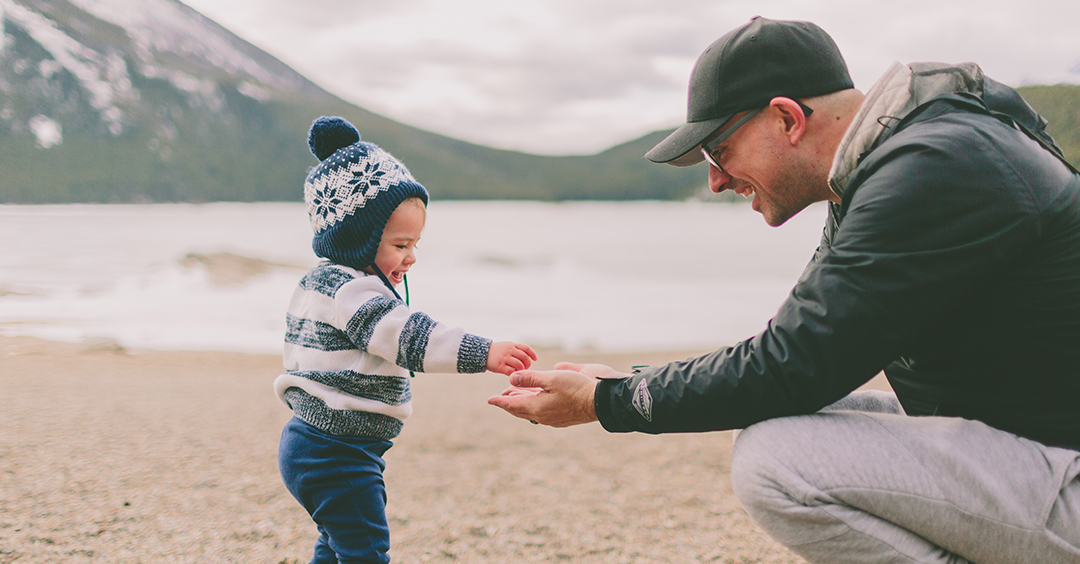 Often it was the highlight of my day, and my wife led me to believe that it might have been the highlight of our toddler son's day, too. She told me that the little guy heard my car pull into the driveway each night and that was his signal to go running for the door that I always used. As I opened that door, I was often greeted by a cute little guy charging my direction and calling out one word at the top of his lungs, actually one syllable, "DA!" He couldn't manage "Daddy" or "Dada" yet, but I knew he was calling my name.

I'm Ron Hutchcraft and I want to have A Word With You today about "Finding the Father You've Missed."

My son went to the door looking for his father and there I was. Tragically, so many people have gone to the door looking for a real father, and no one was there. Or the man who was there hardly lived up to the word "father." We live in a world where more and more people are living with, well, I call it a "daddy deficit" down deep in their heart because of the father they needed but they never had.

When your father wasn't really there or wasn't really a father, you carry around inside you needs that really drive you for your whole life. Many people have done many things - even made many mistakes - trying to get the approval their father never gave them; the security he never gave them...or the love. Some research shows that the second most common reason young women become sexually active is because they're looking for that missing father-love. When your dad didn't do what he was supposed to do for you, you carry around not only deep needs, but sometimes deep anger and bitterness that can spill out on others you love.

The truth is we're all wired for a loving relationship with a father. But ultimately it's not a human father that's the one who can meet our deepest needs. That's why even those who've had a great father still have a "daddy deficit." Because we're lonely for our Father in heaven; the God from whom we come. Earthly dads have the responsibility of being a reflection of our Heavenly Father, but no dad can take His place.

In our word for today from the Word of God, Jesus told a story that reveals why we're all missing the Father we were made for and how we can finally find Him. In Luke 15, beginning with verse 13, Jesus tells about a son who asked for his inheritance early, went to another country and "squandered his wealth in wild living. After he had spent everything," the Bible says, "a famine hit and he began to be in need."

Okay, so he ends up working with some pigs and starving. The Bible says, "When he came to his senses, he said...I will...go back to my father and say to him: 'Father, I have sinned against heaven and against you.'" And "he got up and went to his father," it says. And his dad welcomed him home and showered him with love.

That's what God wants to do for you. The Bible makes it clear that we are separated from the Father we were made for - not by His choice, but by ours. We've taken the life that He gave us and we've lived it our way instead of His way. In essence, we've squandered the life He gave us and we've "spent everything" trying to find out what's missing. And all the time, it's God we're missing. But God loves you too much to lose you. He sent His one and only Son, Jesus Christ, to bring you home - at an unspeakable cost. The only way to remove the sin and the eternal death penalty that makes a relationship with God impossible was for Jesus to die in our place. And He did that for you, for me, for so many.

We found our Father when we put all our hope in Jesus to bring us home. He said, "No one comes to the Father except through Me" (John 14:6). The approval, the security, the love that's eluded you all these years - they can only be found in the arms of the Father you came from - your Heavenly Father.

And finally, after all the searching and disappointment, you can do what this runaway son did. You can tell God, "I have sinned against You, but I want to come home. I'm trusting your Son and His death for me as my way to You." What will He do? He will run to meet you today. He's been waiting for you for a long time.

If you're ready to come home to your Heavenly Father, please tell him today. Just say to Jesus, "Jesus, I'm yours." He's the bridge. And go to our website - there's so much information there that will help you be sure you're finally home. The website is ANewStory.com.