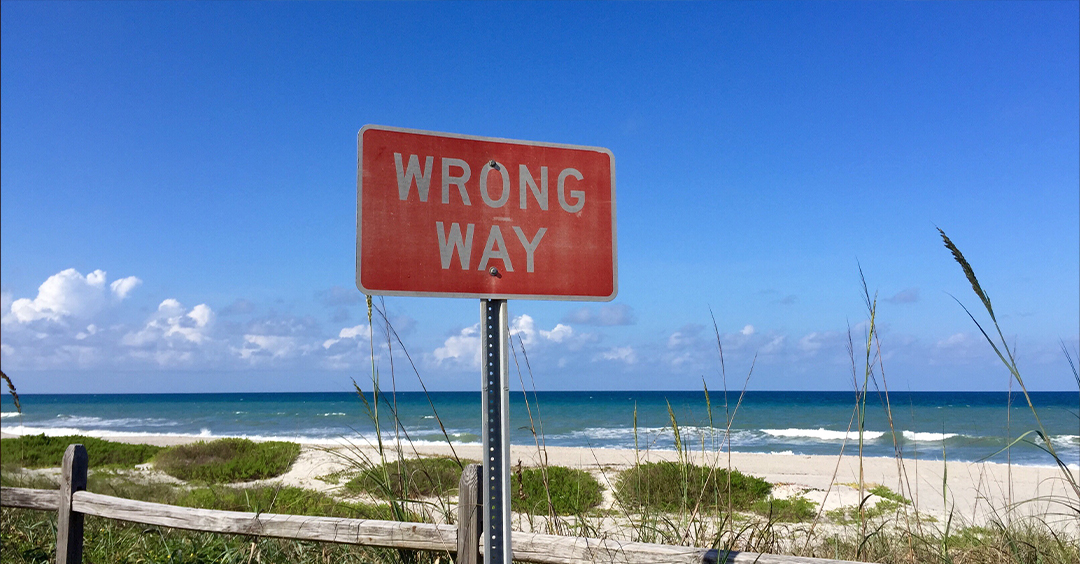 So this guy was heading from northern Arizona to Phoenix, which is in southern Arizona. He called his wife from Flagstaff. That's a two-hour, 75-mile-an-hour drive. "See you in a couple of hours," he said. So he got on the Interstate and took full advantage of those Western speed limits. He had a lot on his mind that day - apparently not including where he was going. By the time he realized what road he was on, he was almost in California; nowhere near Phoenix! Nowhere near home! The guy? Yeah, that was me. I was lost. I didn't even know it!

I'm Ron Hutchcraft and I want to have A Word With You today about "Driving Hard On the Wrong Road."

Poor guy! Poor me; driving hard on what I was sure was the right road, but there was no way it was going to get me home. It wasn't a fatal mistake, though. When you make that mistake with God, it costs you your eternity. The Bible reveals that a lot of people are driving on a road they think will get them to God and that will get them heaven, and there's no way. It's not going to get them home. However sincere they may be in believing they're on the right road, they are in God's eyes, totally lost.

Our word for today from the Word of God is in Proverbs 14:12. It's what I'd call a wakeup call from God. It says in no uncertain terms, "There is a way that seems right to a man, but in the end it leads to death." When it comes to God, "seems right" won't get you there. It's got to be right according to God; not according to us, or our feelings, or what our religion says. This is the one thing you cannot afford to be wrong about, because eternity is a very long time.

Matthew 7 records that Jesus said many are on the road to destruction, thinking it's the right road (Matthew 7:13-14). A few verses later He describes one of those ways that seemed right to folks but led them to death. He said on Judgment Day, "Many will say to Me on that day, 'Lord, Lord, did we not prophesy in Your name and in Your name drive out demons or perform many miracles?' Then I will tell them plainly, 'I never knew you'" (Matthew 7:22-23). On Judgment Day there will be people who knew lots of Christian things, did lots of Christian things, who didn't know Jesus. They had the religion, but they missed the relationship. They had Christianity, but they missed Christ.

It doesn't matter how hard you're driving on the wrong road - how dedicated you might be to it - if it isn't God's road, you will be forever lost. And contrary to what so many think, being good is not the way to go to heaven. That's what God says. He says, for example, "No one will be declared righteous in His sight (or, fit for heaven) by observing the law." No one, no matter how good. Because goodness can't pay the death penalty that we deserve because of our sin.

Then, in Romans 3, God spells out the road that will get us to Him. We "are justified (that means made right with God) through the redemption that came by Christ Jesus" (Romans 3:20, 24). And that came when Jesus hung on that cross and absorbed all the guilt and all the hell of all of my sin and all of yours.

That's why God says this about Jesus in words that are hard to misunderstand: "Salvation is found in no one else, for there is no other name under heaven given to men by which we must be saved" (Acts 4:12).

God says it all comes down to what you do with Jesus. Trust Him and Him alone to get you to heaven or put your trust in something else and never get there. It's a choice every one of us has to make, and our eternity hangs in the balance.

I truly believe God's speaking to someone who's listening right now and He's saying, "You're on the wrong road, man. But today is your day to get on the road that will bring you home. This is your day to give yourself to My Son who gave His life for you." And I pray you'll listen to that invitation in your heart. Everything depends on it. Tell Him, "Jesus, from this day on I'm Yours ." He doesn't point the way to heaven; He is the way.

You want to get this settled once and for all? Let me encourage you to get to our website. There's a simple explanation there that will help you be sure you belong to Jesus. The website's ANewStory.com.

God does not want to lose you. That's why He's coming to you today to show you how you can get home to Him. The right road will give you everything. The wrong road will cost you everything.