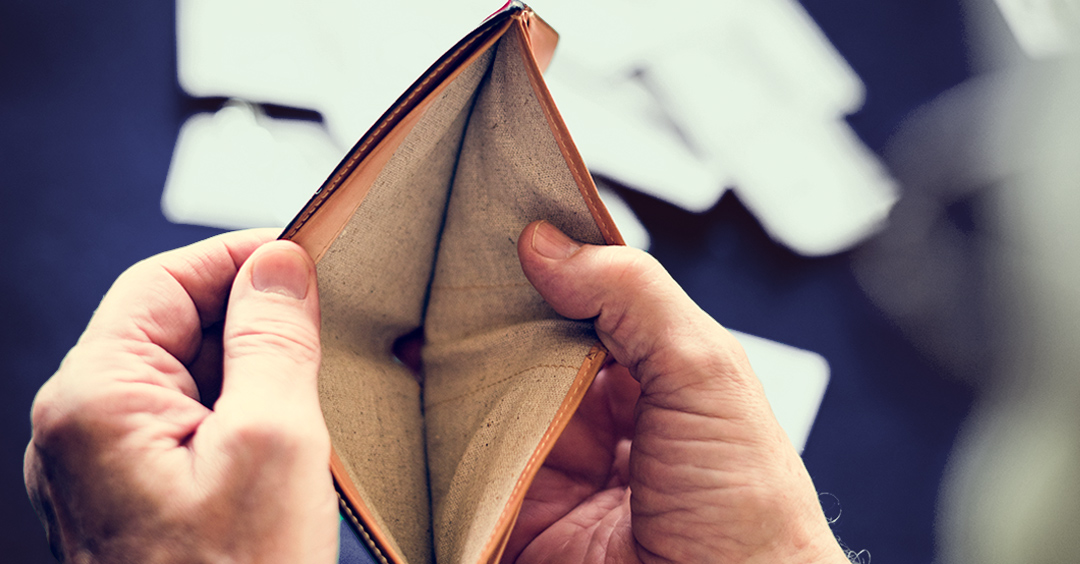 It's never fun when the plane you're flying on hits turbulence, especially if the fellow next to you has like a weak stomach. It's really not fun when an entire airline hits turbulence. Several have over the years, including one of America's largest and one that had been kind of my airline of preference. It was a bit of a shocker to read that their indebtedness had reached such a critical point they were actually considering the protection of bankruptcy to try to recover. Bankruptcy is a word we're hearing way too often. You know? Then I saw the headline that confirmed the seriousness of their situation. Here's what it said: "Airline Seeks Rescue in Bankruptcy."

I'm Ron Hutchcraft and I want to have A Word With You today about "Declaring Bankruptcy - Finding Hope."

Seems strange, doesn't it? The hope of rescue depending on declaring you're bankrupt. But it's the only hope some businesses have of recovering. Declaring bankruptcy is also the only hope you or I have of escaping the awful consequences of running our own lives instead of letting God run them. Our moral debt to God is so far beyond our ability to pay.

The spiritual economics of heaven and hell are spelled out starkly in Romans 6:23, our word for today from the Word of God. "The wages of sin is death, but the gift of God is eternal life in Christ Jesus our Lord." Just three chapters earlier, God makes it clear that "all have sinned and fall short of the glory of God." That "all" means there's no one who's excluded, not you, not me, not the most religious person listening today. We've all earned those "wages of sin" which is "death." That's spiritual death, which means total separation from the God who has made us...forever.

But after that awful statement about what our sin costs, the light suddenly goes on when God talks about "eternal life." So it's possible I don't have to suffer the penalty that I deserve for hijacking my life from my Creator. It is possible, but it is the gift of God. That's "gift," as in there's nothing I can do to earn it; someone else paid for it. Jesus paid for it. He died on the cross to pay for it. He took the death penalty that I deserve - that you deserve. That's why He cried out, "My God, My God, why have You forsaken Me?" God the Father was turning His back on God the Son so He would never have to turn His back on you!

But there's only one road to that spiritual rescue. You've got to declare your spiritual bankruptcy, admitting there's nothing you can do to pay the debt for the sinning you've done. And that means the surrender of all our spiritual, religious pride, of any hope we've been putting in our religion, or our church, or our Christianness. As great a person as people may think we are, in God's eyes, we're bankrupt, or He wouldn't have sent His Son to die to pay our debt. We may look great, but we're spiritually broke.

Has there ever been a time when you've come to God with nothing in your hands and just said, "Lord, my only hope is what your Son did on the cross for me. So, by faith, I give You my life. I turn from running my own life. I claim Jesus as the total payment for every sin I have ever committed." Until that moment of surrender, your bill with God stands unpaid, and you still carry that awful death penalty.

Don't you want to get that settled today; the one day you know you have to do it? Well, then, tell Him, "Jesus, I'm yours. Thank you for dying in my place." I would really encourage you to go visit our website today, because it's all about how to begin this relationship with the only One who can save you from your sin. I hope you'll go there - ANewStory.com.

What a wonderful day for you to come to the Savior to declare your bankruptcy. See, your bill has been paid on an old rugged cross. Think of this: you can go to bed tonight debt-free in God's sight! Forgiven and free!