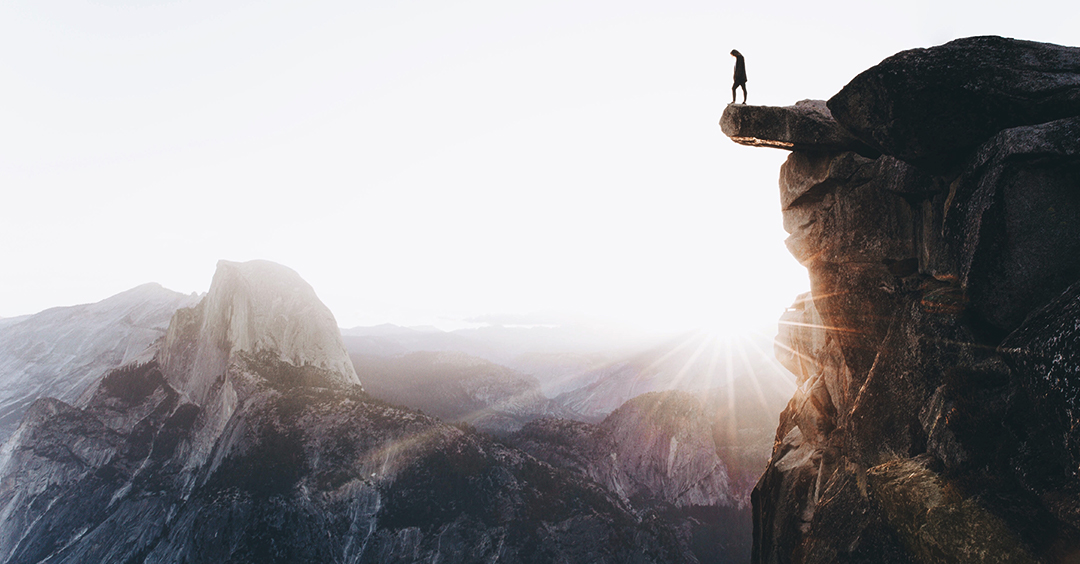 Amy Carmichael was one of India's most heroic missionaries, and a woman whose life continues to inspire a lot of people today. She has written some inspiring words, but none more inspiring than her account of a scene she saw in her mind one sleepless night as she agonized over the people around her who didn't have a relationship with Jesus. She saw herself standing on the edge of a sheer cliff that dropped off into this dark and seemingly bottomless space. She described the people who were moving steadily toward that edge. She saw a blind woman plunge over the cliff with a baby in her arms and a child holding onto her dress. Streams of people began to come from all directions; all of them blind.

There were horrible screams as they suddenly found themselves plunging into that awful darkness. There were, thankfully, a few sentinels along the edge, but the gaps between them were really far apart. And while the sentinels were able to save a few, most people just kept plummeting unwarned into that oblivion. In Amy Carmichael's words, "Over and over the people fell, like a waterfall of souls." She went on to say, "Then I saw a little picture of peace, a group of people under some trees with their backs turned toward that gulf." When she investigated what had them so occupied that they were ignoring the carnage just beyond their circle, she found them playing with the grass and the flowers. They were busy, they said, making daisy chains.

I'm Ron Hutchcraft and I want to have A Word With You today about "Daisy Chains."

It's an awful picture, isn't it? One I can't get out of my mind. And, honestly, I hope it's a picture you'll not forget. Because somewhere in that tragic vision is you and me. If you've never put your total trust in Jesus Christ and His cross to rescue you from your sins, you're the blind man or woman headed for that spiritual cliff. Not because it's what God wants, but because you've never opened your heart to the Savior who died so you don't have to. And none of us knows how soon we'll reach the edge.

Or maybe your place in the picture is standing as one of those sentinels, trying to stop as many people as possible from going over the edge into a Christless eternity. You're actively praying for opportunities to tell people about Jesus. You're seizing every possible opportunity to give them the life-saving message about Him. Because of you, some of those folks will be rescued by Jesus. They'll be in heaven with you, and that will be the ultimate legacy of your life.

But sadly, too many of us are in that group sitting in the grass, doing nothing about those around us who are moving steadily toward an awful eternity. We're real busy making our daisy chains. Listen to God's warning in Amos 6:1, our word for today from the Word of God. "Woe to you who are complacent in Zion." Complacent in God's place; going to heaven but not much caring about those who aren't - making daisy chains. You're so immersed in your work, your family, your activities, even your church you might be missing the reason God has placed you where you are - to help some of the folks there be in heaven with you someday! To be sure, God has to draw them to Himself, but His chosen deliverer of how to know Him is you. He won't be sending an angel to tell them what Jesus did for them on the cross. He's left that with you. You're their chance.

Maybe there's a gap in the rescue line because you haven't taken your place as God's rescuer of the people around you. God's command from Proverbs 24:11 is: "Rescue those being led away to death... If you say, 'But we knew nothing about this,' does not He who weighs the heart perceive it?...Will He not repay each person according to what he has done?"

If in that picture you are the one who has been, maybe unknowingly, heading toward the destruction of the death penalty for human sin, and you're headed for the edge and you've never asked Jesus to rescue you from your destruction - see He took all that for you. Well, right now would be your time to say, "Jesus, I'm yours." And to go to our website and get the information that will help you be sure you belong to Him. That website is ANewStory.com.

But if you know Jesus, how can you be content making your oh-so important daisy chains when every day someone is plunging over the edge into an unthinkable eternity?