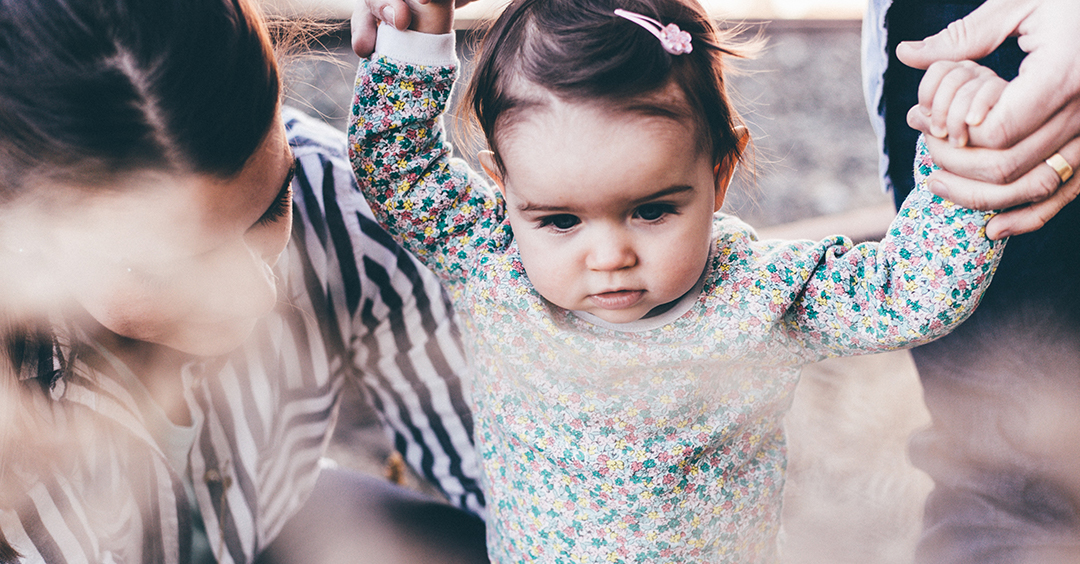 Our son was so excited when he called us. Our year-old granddaughter had just gotten up and walked about 30 steps across the floor! We had seen her crawl for the first time...we'd seen her stand by herself and even take a step. But this time she had suddenly exploded into big-time walking. Our son seemed to have an immediate revelation about what this development was going to mean for the life of her parents. He simply introduced his announcement of her walking with these four words, "Let the games begin!" No kidding!

I'm Ron Hutchcraft and I want to have A Word With You today about "Crawling is Not Enough."

You know, it's been fun and educational to watch grandchildren explode in their capabilities in the early months of their life. Now, our little granddaughter I was telling you about, back then she wasn't content with baby food for long. No, she kept following our forks as we put real food into our mouths. So, she realized she wanted some of that. And she wasn't content for long with depending on someone else to feed her. No, early on she was reaching out for food and insisting on feeding herself. Our little darlin' crawled for a while, but oh, boy, we could tell she was impatient with that being her only means of transportation. She really wanted to walk and she really did. Let the games begin! Actually, let a whole new life adventure begin.

A healthy child is never content to stay at the same level, and neither is a healthy child of God. Unfortunately, too many of God's kids have reached a particular level of growing up in Jesus and they have just settled down there. They don't feed themselves much spiritually. They depend largely on others feeding them. They think spiritual crawling is just fine, maybe because most of the Christians they know are stuck in the crawling stage. Our son was like any father; he was happy his daughter wasn't content to stay where she was. She was restless for more. He would have every reason to be very concerned if she was content to stay at a level that was below where she was meant to live. Right? Wonder if that's how your Heavenly Father feels about you?

Maybe you know that deep in your heart you're restless for something more. Your life is full, it's just not fulfilling. That's because God wants you to want the rest of what His Son died to give you. The writer of Hebrews challenged believers who he said "ought to be teachers" by this time but instead were needing someone to "teach you the elementary truths of God's Word all over again." He told them to "leave the elementary teachings about Christ and go on to maturity" (Hebrews 5:12, 6:1).

In Philippians 3, beginning with verse 12, our word for today from the word of God, we hear what a healthy child of God wants. Remember, this was written by the Apostle Paul, maybe the most powerful Christian of all time. But still he says, "I press on to take hold of that for which Christ Jesus took hold of me. I do not consider myself yet to have taken hold of it. But one thing I do: Forgetting what is behind and straining toward what is ahead, I press on toward the goal to win the prize for which God has called me heavenward in Christ Jesus."

Maybe you've been coasting at the same spiritual speed for a while; you've been content with - let's face it - mediocrity - with crawling. But you're restless. God's made you restless. He has so much more for you. It's time to get on your knees and say, "Jesus, I'm not content where I am anymore. I want to know you more than I've ever known you before, and I'm going to be pursuing You in Your Word and in prayer, and in Your church as I've never pursued You before. And, Lord, I want to make a greater difference with the rest of my life than I've ever made before. It's Yours to use as you see fit from now on."

He's been waiting to hear that from you. You are about to "press on to take hold of" something for which Christ Jesus "took hold of" you. So let the games begin as the lid comes off your relationship with Jesus. Let the greatest adventure of your life begin! And if you've never begun your relationship with this man who died for you, who will give you the meaning your life was meant to have, tell Him today, "Jesus, I want to belong to You. You are the more I was made for."

Get to our website, ANewStory.com, and find out exactly how to be sure you belong to Him. God has so much more for you. Listen to these words, "Made for more." You'll find it when you find Him.