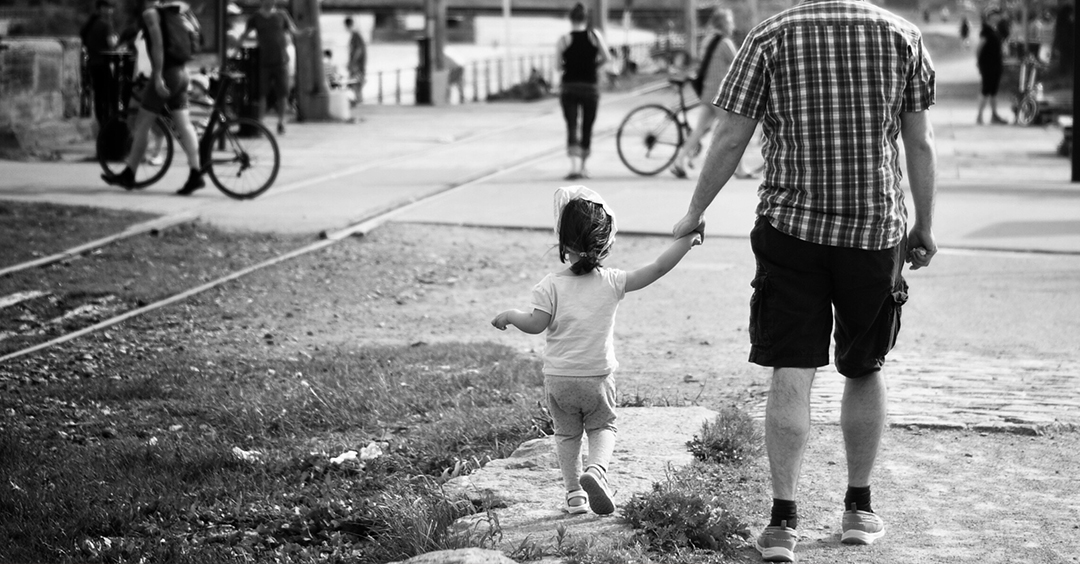 Our good friends were visiting us with their precious three-year-old daughter. Captivating dark eyes, a winsome smile, a high-energy personality, and a mind of her own. Her Dad said they were crossing a very busy street - he and his daughter - and he said, "Now hold Daddy's hand." She apparently didn't like that idea. She looked up at him with those big eyes and said, "That's OK, Daddy. I'll hold my own hand." Not a good idea.

I'm Ron Hutchcraft and I want to have A Word With You today about "Changing Hands."

Our Heavenly Father looks at the road ahead and He knows exactly where we should go and when we should go. He reaches our direction and He says, "Hold Daddy's hand." Maybe you've got a mind of your own, and you've kind of got that independent spirit. And you say, "That's OK Daddy. I'll hold my hand." Not a good idea.

Tucked away in the drama of the first Christmas is a better idea. Our word for today from the Word of God, Luke 1:26, "In the sixth month, God sent the angel Gabriel to Nazareth, a town in Galilee, to a virgin pledged to be married to a man named Joseph. The virgin's name was Mary... The angel said to her, 'Do not be afraid, Mary, you have found favor with God. You will be with child and give birth to a son, and you are to give Him the name Jesus.'"

So, God comes to Mary and says, in essence, "Take My hand - I'm leading you into something amazing." Now, if Mary had insisted on holding her own hand, she never would have gone. He's leading her into a situation where she will suddenly be mysteriously pregnant. And who's going to believe that God is doing it? She's got a lot to lose if she takes God's hand and goes where He wants to take her. She'll probably lose her reputation as a "nice girl of Nazareth." She stands to lose the man she loves when he hears she's expecting and he knows he's not the father. The wedding she has dreamed of? Probably will never happen. And since, in the Jewish culture of that day, they stoned women for sexual sin, obedience could even cost Mary her life.

But listen to her response to God's plan. "I am the Lord's servant." Those five words change everything. If Mary's identity is "I'm Joseph's girl," there's no way she's going to do what God wants. If her image as a "nice girl of Nazareth" is her identity, she won't do this. But Mary bases her identity on one thing and one thing alone. With open hands, open arms, face looking up, she declares, "I am the Lord's servant. May it be to me as You have said." And because of that surrendered spirit and surrendered future, Mary carries God's only Son in her body, nurses the Son of God, teaches the Son of God.

As we approach this Christmas, look at what God gave because He loves you so much. He sacrificed His only Son to pay the death penalty for the sinning you did. That should remove any doubt of whether you can trust Him with the things that matter most to you. Anyone who loved you enough to die for you will never do you wrong.

It's a good day to ask yourself, though you may know all about Jesus, though you may go to His meetings, though you may agree with Him, do you belong to Him? You might believe in Him but not belong to Him because you've never really reached out to Him and made yours what He died to give you - this greatest gift in the world - eternal life and forgiveness and heaven, and a relationship with your Creator made possible only one way; by Him taking your place, dying for your sin. Why don't you let this be the day you say what you've missed before, "Jesus, I'm Yours."

You want to begin that relationship? I'd love to help you if you'll just go to our website. It's ANewStory.com. This Christmas season, say those five words that open you up to God's best, "I am the Lord's servant."