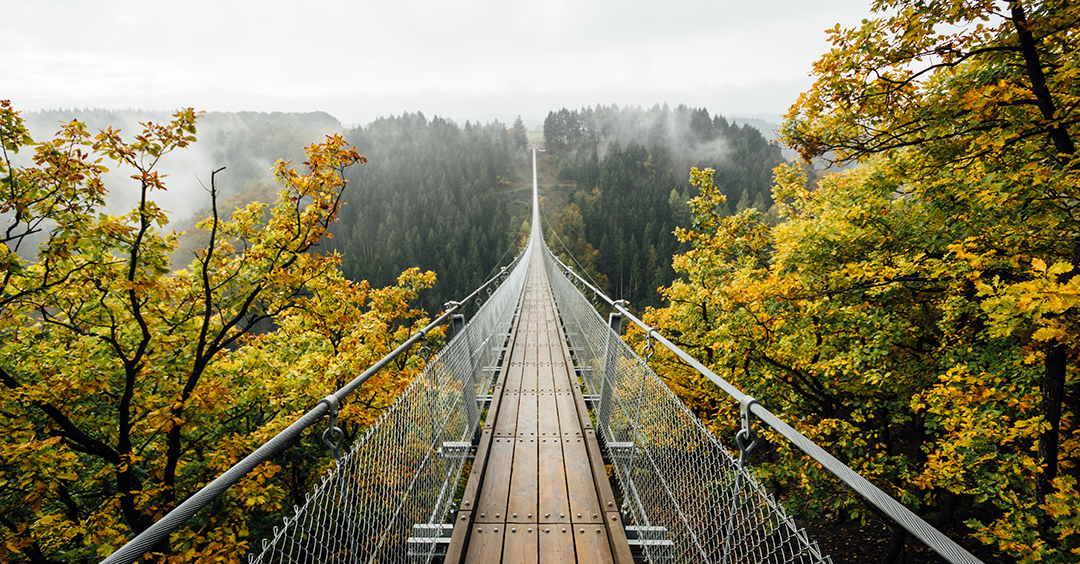 A few summers ago, I went on a river trip with some young people. It was a river that had not been nearly so friendly just three months before. The spring rains had been record breakers and the resulting floods had even redirected parts of the river. Our guide took us down a whole new channel of the river that hadn't even been there three months earlier, and he pointed out this palatial home that was built near the river by a multi-millionaire. The flood had suddenly made his home very vulnerable. It was saved only by a hastily-constructed brick wall. A lot of the landscaping around that home couldn't be saved, like the bridges for example. See, since this had just been a little stream before the flood, the homeowner built some charming wooden bridges across it at several points. Now the bridges weren't really destroyed, they were just, like, relocated. As we moved downstream, we saw this charming wooden bridge sitting in the middle of an island of mud in the middle of the river. Later we saw another bridge, pretty intact, just sitting on the riverbank. Oh, they were nice bridges all right, they just didn't go anywhere.

I'm Ron Hutchcraft and I want to have A Word With You today about "Bridges to Nowhere."

One of the most defining, most bottom-lining statements in all of the Bible is our word for today from the Word of God. It's Acts 4:12 - the disciples of Jesus have just been talking about the name of Jesus Christ. Listen to this. "Salvation is found in no one else. For there is no other name under heaven given to men by which we must be saved." Wow! Let me tell you, in our age of pluralism and tolerance and eclectic spirituality, those are pretty loaded words about Jesus.

Salvation is in no one else. We have to be saved by His name. How can this be? Mankind seems to know instinctively that we need some kind of bridge to get to God. We feel the distance between us and the one who made us, and maybe you do. We're trying to discover what will get us to Him. So, we have the Protestant bridge to God with good works that are supposed to take us to God, and the Catholic bridge with good Catholic things to do, and the Jewish bridge, and the Muslim bridge, and the Buddhist bridge, the Hindu bridge, the bridge of New Age spirituality, etc.

Our human nature wants to believe that all those bridges end up the same place with God. But Jesus defied our preferences when He made this incredible claim. He said, "I am the way, the truth, the life. No one comes to the Father except through me." In other words, even though all those religious bridges are beautiful, they're bridges to nowhere.

Why? Because of what it is that stands between us and the God that we're desperately trying to get to. In simple words, it's a death penalty. The Bible says, "The wages of our sin is death." All of us have missed the way we were created to live with God running things. We've hijacked our lives from our Creator, we've run our lives our own way, and the penalty is death. You can't pay a death penalty by any amount of doing good. There's only one way. Somebody has to die, and someone did. But not the one who deserved to die for my sin. I should have, but the Bible says, "Christ died for our sins, the righteous for the unrighteous, that He might bring us to God." Out of His amazing love, Jesus, God's Son, did all the dying for all the sinning we've ever done. And while there are many religions, there's only one Savior, and only He can take me across that gap between me and my Creator.

So, everything depends on what you do with Jesus. Maybe you've been on a spiritual bridge trying to find a relationship with God but it's been a bridge to nowhere. But right now, God, who loves you so very much, is pointing you to the bridge He built to bring you to Him. It's the cross where His one and only Son paid for you. The bridge God has provided cost Him what mattered most to Him. It cost Him His Son.

That Jesus came out of his grave. He was resurrected, and today he's ready to walk into your life. He is your bridge to God and to heaven. Tell him today, "Jesus, I'm yours." I hope you can get to our website. We've tried there to tell you the way across that bridge and know you belong to Him. That website is ANewStory.com.