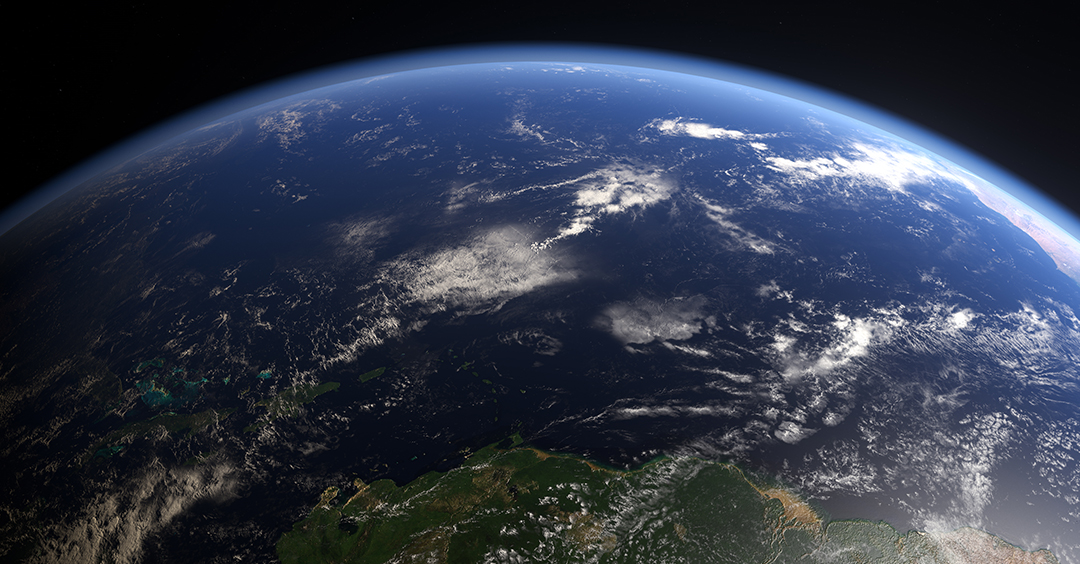 There have been a lot of changes in the space program over the years, but I'll tell you, I like thinking back to those original pioneering flights to the moon. Those are pretty heroic deals - the Apollo missions. It was mind-blowing to think that we had reached the point where men like us could actually walk on that moon that had just been that distant light in the night for millennia. It really was a big deal!

But Buzz Aldrin, one of the astronauts to first walk on the moon, put things in perspective when their spacecraft was about halfway to the moon. He said he looked out the window at our earth and then he put his thumb up in his line of vision. He said, "Suddenly, no earth." WOW! This planet that's like our everything could be covered by a man's thumb. But not only is it a small planet in the cosmic scheme of things, but well, as events will often remind us, it's a vulnerable little place, too.

I'm Ron Hutchcraft and I want to have A Word With You today about "A Precarious Planet."

A while back, when Japan was rocked by a 9.0 earthquake and then inundated by that monster tsunami and they even fought fears of a nuclear meltdown, I think, you know, the whole world felt the tremors. I couldn't help but think about what a precarious planet we live on. Some tectonic plates move a relatively few feet and a chunk of our world convulses for a few seconds. A nation moves, the earth's axis shifts and the landscape changes forever. And in those little brief convulsions that can spawn a monstrous wall of water that erases towns and sweeps away everything in its path. And destructive tsunami waves race 5,000 miles across the Pacific and they're felt in California and Oregon. All because of some sliding rock beneath the ocean.

You know, on a normal day we just breeze through our life, acting like we'll be here forever. And then comes the wakeup call of some trauma or tragedy that briefly snaps us out of our complacency. Life really is fragile. Eternity really is close. And I could be there in a moment.

Occasionally I'll see one of those road signs with a five-word warning. It happens to be our word for today from the Word of God. It's in Amos 4:12 - "Prepare to meet your God."

You know, in the days of the tragedy like a great tsunami, the difference between life and death is the warning and whether or not you get to high ground before the tsunami hits.

Every day on this planet, a "tsunami" called death sweeps 150,000 people into eternity ready or not. Since it happens with, you know, one heart attack here and one traffic accident there, we don't see it on the news like we do an attack of a killer wave. But it's real, it's relentless, and it's coming my way. God clearly tells us what to expect: "Man is destined to die once, and after that to face judgment" (Hebrews 9:27). "Judgment!" I mean, that's facing the penalty for a lifetime of marginalizing God and hijacking the running of my life from Him.

The tsunami warning of God has sounded. The warning is clear. The Bible says, "The wages of sin is death" (Romans 6:23). But the high ground is within reach. It says, "but the gift of God is eternal life through Jesus Christ our Lord' (Romans 6:23). He took on Himself the full fury of the tsunami of God's judgment for my sins when He died on the cross. The Bible says, "He personally carried our sins in His body on the cross" (1 Peter 2:24). He did what no religion on earth could do. He paid the death penalty for our sins so we could be forgiven, and clean, and ready for eternity whenever it comes, however it comes.

The high ground is on a hill with a cross on it. Millions of people have fled to that cross and found safety. I have. And Jesus stands there today, extending His invitation to you. If you've never come to Him, if you've never given yourself to Him, put your life (your fragile life) in His hands, tell Him today, "Jesus, I'm Yours."

This is a turning-point time in your life. I want to encourage you to go to our website, because you're going to find some very encouraging information there about securing this relationship with God. The website is ANewStory.com.

It's a precarious planet. It's a fragile life we have. Yes, we have an appointment with God and there's a way to be ready. This is a good day to run to Him.