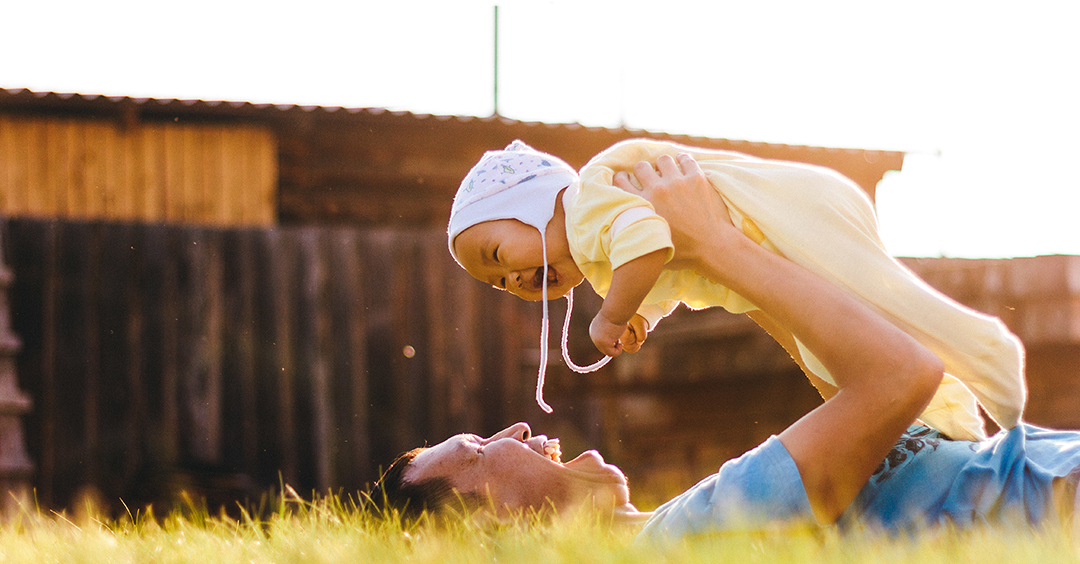 Okay, so it was one of those times when our kids were going crazy that my wife would love to repeat one of her favorite sayings, "The apple falls not far from the tree." I never did hear her say that when they did something good. Actually, I have been credited or blamed for a number of things as their father. Supposedly, my daughter has her father's nose, and some people think she got some writing ability from me. My sons have been accused of having my sense of humor, which is totally scary. I wish I could find out who has their father's hair; more and more of it is missing. Well, if you're a father, your children do have a lot of you in them, let's face it. I hope they've inherited what really matters from you.

I'm Ron Hutchcraft and I want to have A Word With You today about "A Father's Greatest Gift."

Our word for today from the Word of God comes from Exodus 3:6. Moses is at the crossroads of his life. He is about to be directed by God to lead God's people out of slavery in Egypt. This is huge! God is making this awesome personal appearance to him, and He tells Moses how to approach this holy ground. And then, in a sense, He introduces Himself to this overwhelmed servant of God. Here's what the Bible says, "Then He said, 'I am the God of your father, the God of Abraham, the God of Isaac, and the God of Jacob.'" Now that last part of God's signature was a title He used often in Old Testament times. But what's distinctive was that God begins by telling Moses he was the God of his father.

Deep inside Moses was this buried treasure that God was opening at the burning bush - a lifetime of knowing Jehovah God. Moses had lived in pagan affluence, he'd lived in a wilderness, but no matter where he went, he carried this spiritual treasure. And who put it there? His father!

But then, a lot of our attitude toward God comes from the kind of man Dad is. After all, God has asked us to call Him Father. And when we hear about God, we tend to call up our feelings about our earthly father. Sadly, those feelings are pretty painful and negative in some young people. I've often had to remind them that God is not the father you had on earth, but he's the father you always wished you had.

As a father, you have a lot of important roles, but none is so cosmic, so eternal as planting God in your son or daughter. Our culture has this idea that spiritual stuff is a mom's business, but that's dead wrong. God didn't introduce Himself as the God of your mother, even though she was a godly woman. In Ephesians 6:4, when God gives the New Testament instruction to raise your children in the Lord, it is introduced to fathers! The spiritual buck stops with the man!

Your child is learning how important this Heavenly Father is from your teaching or how unimportant He seems to be from your silence. Your son or daughter is learning about God from how you treat them. Is "father" forgiving or unforgiving; attentive or inattentive; affectionate or detached; pure or profane; truthful or untrustworthy. Is he fair or arbitrary? Is he there for you or not there for you?

What if God were to appear to your child in their moment of crisis and say, "I am the God of your father." What kind of God would they think He is? There was a five-year-old boy in a New York hospital who was dying of leukemia. One night his father was getting ready to leave, and the boy said, "Daddy, what is God like?" The father cleared his throat a couple of times and fumbled around for an answer. The little guy could tell his dad was uncomfortable, so he just said, "Daddy, that's OK. If God's like you, then I'm not afraid." Wow!

Dad, show them that kind of God. And if you can't because you don't know Him yourself, maybe it's time to make God your Father by trusting Jesus to be your Savior. If you want to know how to have that relationship with Him, Dad, go to our website. It's ANewStory.com.

And make sure daily you give your precious son or daughter more of God, because all a child can get from a father, that is His greatest gift of all.