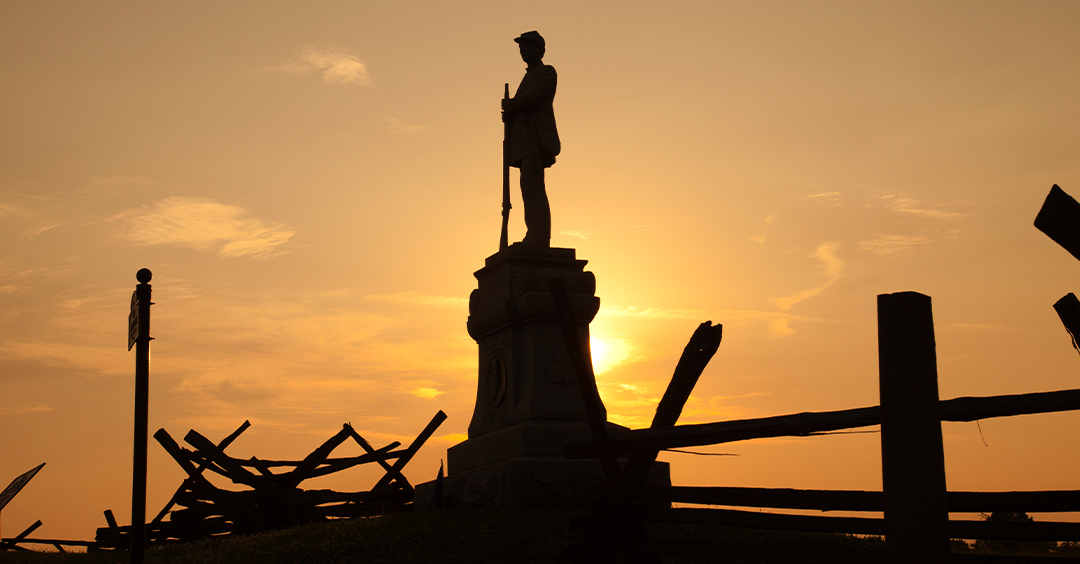 Okay, I admit I'm a history guy. I stop at President's houses and all these places like that. My poor kids have gone on more tours of places: Revolutionary War, Civil War. And, of course we're going to stop and see that. We'd just come back from a vacation that had included a tour of a Civil War battlefield and we had our appropriate souvenirs. That night there was actually a revealing addition to my wife's and my room! On her side there was a gray hat, on my side there was a blue hat. We were just goofing! But guess who grew up in the south, and guess who grew up in the north. But I'll tell you what. Back in those days, as in many battles throughout history, the color of your uniform made you the other guy's target.

There's a story about one soldier during the Civil War who tried his own unique method of staying safe. He decided he'd wear a blue coat and gray pants. One small problem: he got shot at on both ends.

I'm Ron Hutchcraft and I want to have A Word With You today about "Time to Choose Your Side."

Our word for today from the Word of God comes from John 19:38 - a man who had to make that choice. We're going to look at an amazing day in the life of this man who in a sense literally tried to wear two opposing uniforms.

Joseph of Arimathea - the scene is right after the death of Jesus, and it says, "Joseph of Arimathea asked Pilot for the body of Jesus. Now Joseph was a disciple of Jesus, but secretly, because he feared the Jewish leaders. With Pilate's permission he came and took the body away." We know now, and we'll know for all history that Joseph said, "I want Jesus buried in my tomb." But, see, this is a man who wore the uniform of Jesus in his heart but who operated in surroundings and with people where Jesus wasn't respected. And that could cost him a lot for people in his circle to know of his allegiance to Jesus! So on the outside he wore the uniform of his environment, blending in, but on the inside, he had his Jesus uniform. This sound a little familiar at all?

Is there a place where you cover up your Jesus uniform because it might cost you to show it, like at your job, or in school, with a particular group of people, at the gym, with certain associates, with your family, on social media? Well, the problem is when you don't choose your uniform, you just get pressure from both sides. You haven't declared the Jesus difference in your life to the unbelievers around you so they continue to expect you to be like them. Meanwhile, you have a Christian world that knows your Jesus side and expects you to live like you belong to Him! When you don't choose, you've got pressure from both sides.

Well, be encouraged with what happened to Joseph. Suddenly he blew his cover, he went public, he acted as if he didn't care who knew he belonged to Jesus. What happened here? The cross happened. Joseph must have seen what Jesus suffered that day and he couldn't deny his Savior anymore. Like Joseph, maybe it's time for you to say, "Jesus, if you could hang on a cross and die publicly for me, unashamed, I can live publicly for you."

It was after an event where we had challenged Christian young people to be a Jesus ambassador to their friends. A young 12-year-old girl surprised her mom; I guess it was the next day. She'd had Jesus shirts but she only wore them to Christian places, but the morning after this rally she appeared ready for school wearing one of her Jesus shirts and her Mom was kind of taken aback. She said, "You're wearing that to school?" And her daughter replied, "Mom, today I am going to start making a difference."

Well, it's not necessarily about wearing a Christian shirt or handing out Christian literature. But it is about making a firm decision to choose your uniform once and for all. To belong to Jesus and not care who knows it. To bring up your relationship with Him whenever there's an opportunity; to seek opportunities to tell people about that relationship.

Here's God's charge to you in Ephesians 6:13, "Put on the full armor of God, so that when the day of evil comes you may be able to stand your ground, and after you have done everything, to stand" Well, if you've tried maybe serving two masters haven't you done that long enough? You've postponed choosing your uniform long enough. Jesus stood for you, and He didn't care what it cost. It's time you did that for Him.