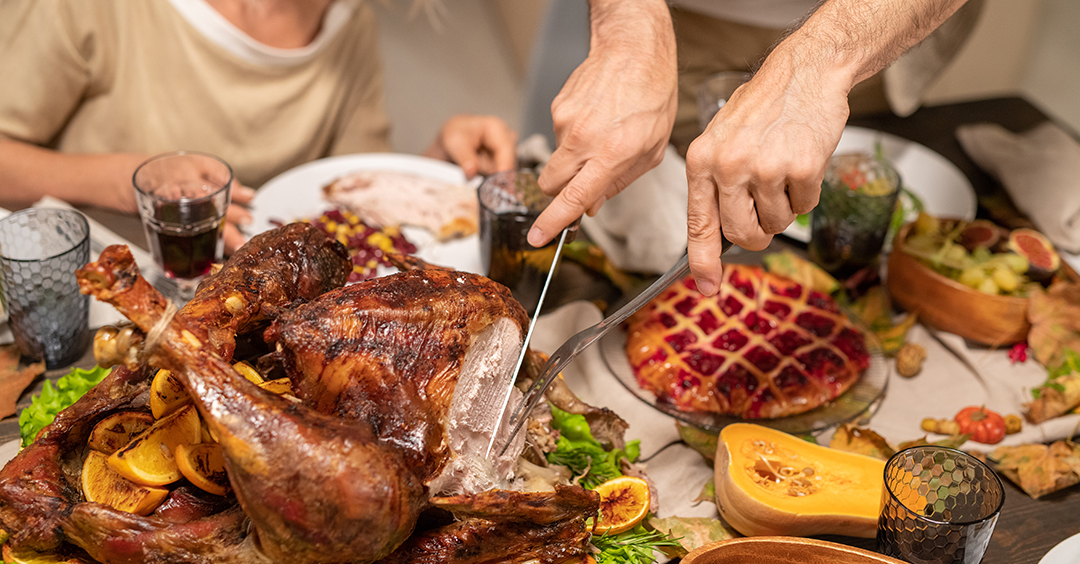 Somewhere in the Fathers Handbook, I think it says the father gets to carve the turkey, or the ham, or the roast. And I don't mind; I feel very fatherly when I get to do that, very manly sitting at the head of the table with my super carving knife. But I have observed this phenomenon. Often I end up with an empty plate. See, sometimes at a large dinner gathering, you've got someone who loads up their own plate, starts chowing down and shortstops all the food where they are. Ever notice that it all seems to pile up sometimes in a corner and it doesn't get moved past there? I mean, they're satisfied, so some of us end up with nothing in our corner. Some lucky guy has it all in his corner. Now, what's fair is that you take what you need and then you pass it on to others who don't have any yet. That's how this system works. When you've got plenty. it's just real easy to forget those who haven't been served yet.

I'm Ron Hutchcraft and I want to have A Word With You today about "Stuffed But Sitting On It."

Our word for today from the Word of God, Matthew 10. Jesus is speaking to His disciples, who have in a sense been sitting at the dinner table and being very well fed. They have sat in many meetings with Jesus, they've heard and seen a lot, and now He calls them together in Matthew 10:8 and says, "Heal the sick, raise the dead, cleanse those who have leprosy, drive out demons." He's sending them out now. And then these beautiful words, and I remember a chorus to this effect, "Freely you have received; freely give." In other words, Jesus is saying, "Look, I passed it to you. Not just so you could be full. Now you're supposed to pass it to others."

There's a story in the Old Testament in the book of 2 Kings. It tells about four lepers who lived outside a city that was being starved to death by an enemy siege. Finally they decided just to surrender to the enemy thinking, "Well, you know what? We're probably going to be killed anyway, or we're going to die of starvation. So, maybe they'll take us and feed us, or we'll just die like we're going to die here anyway." What happened was they found out that God had performed a miracle and driven the enemy out. The camp was empty. And they ended up with all this food that had been left behind! They're sitting there eating and chowing down all night long while people are starving to death in the city they just came from.

Finally, by the morning light, one of them says, "What we're doing is not right. This is a day of good news and we are keeping it to ourselves." What a picture of many of us North American Christians. We're the spiritually wealthiest Christians in history: seminars, and workshops, and radio and TV programs, and websites, and conferences, and magazines, and books. It's just so easy to get caught up in a comfortable cycle of listening and just saying, "Well, you know, that was a nice sermon, wasn't it?" Going to Bible study, attending a fellowship we enjoy, going to concerts; feeling real spiritual a lot of the time.

And we are to be growing. We are to be filling up with spiritual resources - loading up on the Lord, loading up on His truth - but not just to enjoy it ourselves. "Freely you have received; freely give." Jesus said, "To whom much is given, much is required." Shouldn't you be giving as much as you're getting? Responsibility goes with all that we're hearing, and seeing, and learning. It goes with those riches. There are lost people who need at least a little of what you have a lot of.

Every believer should be actively involved in reaching out to lost people; rescuing the dying somehow...including you, in an outreach to people that you are uniquely close to. Or by starting or supporting outreach programs through your church, or by giving your time or talent to a Christian ministry that is actively rescuing lost people. Maybe even by changing your life plans. But don't just keep piling it up on your plate, because there are people all around you who are dying of starvation.