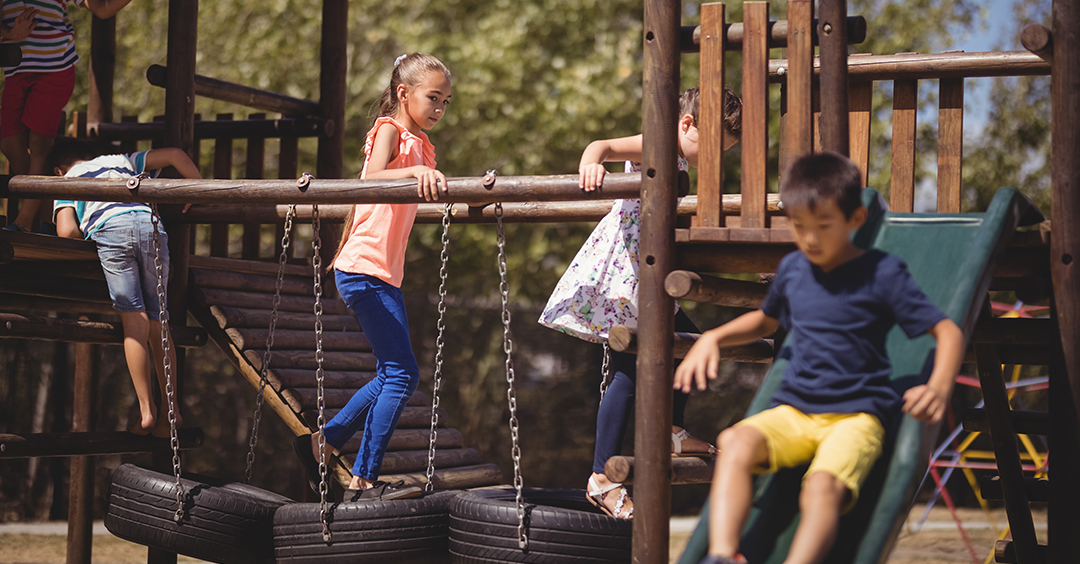 I think I attended what they would have called a racially-troubled elementary school when I was in kindergarten and first grade. The only thing is the kids didn't know it; somebody forgot to tell us it was racially troubled. It was a changing neighborhood and I guess the adults were real tense about what was going on between the Black and white kids. We just didn't know there was any difference between us.

I was out on the playground one day and we were playing dive bomber. It was winter and we all had hats and coats on. The idea was you're supposed to come in with your arm real low and knock off the other guy's hat. Well, in the process (clumsy me), I connected with the head of one of my Black kids in our class. I'm a klutz; I missed. Up comes this big, sixth grade patrol boy on a power trip. We called them patrol boys, crossing guards, whatever...they looked huge to a little first grader. This patrol boy said, "Did you try to knock his hat off?" I said, "Yeah, I was trying to knock his hat off!" I was so confused I didn't know what to answer him.

He said, "Wait a minute! Did you say you were trying to knock his head off!?" Oh that isn't what I said. I said I was trying to knock his hat off. Did you know I was so intimidated by that crazy patrol boy I couldn't tell him what really happened. Then he said, "Then I'm taking you to the principal's office." That did it! You can't imagine how big that sixth grader looked to me, and then he's got the power of the principal behind him. I had something important to say, but he seemed just too big to say it to.

I'm Ron Hutchcraft and I want to have A Word With You today about "Intimidated Into Silence."

Our word for today from the Word of God comes from Proverbs 29:25. It says, "The fear of man will prove to be a snare. But whoever trusts in the Lord is kept safe." I have a friend who has a very powerful, wealthy father who has shown a lot of Christian leaders generosity over the years. And, therefore, he's been approached by many of those people for contributions. They've spent hours on end developing his friendship. His re-born daughter said something that really made me sad. She said, "Ron, as far as I know, not one of them has ever shared the Gospel with my Dad." Oh, they went to him for financial support for the Lord's work, and I can understand they probably didn't want to offend him, but because this man is rich and powerful, people don't tell him about Jesus.

Is that what Proverbs is saying, "The fear of man trips you up," "It's a trap," "It's a snare." Let's bring it down to where we live. There's probably someone in your world who's powerful, maybe a supervisor, a strong relative, maybe someone whose favor you need for some reason. Have you ever tried to tell that person about Jesus or have you been intimidated into silence? No one should miss a chance at heaven because they're in a powerful position and they scare people away. I mean, I'm a child of the King of the universe. I don't need to fear or be intimidated by anyone. I know who I am. I'll be that forever; no one can take that away from me. That's my identity you can't touch.

Why don't you begin to pray that the Lord will help you see that intimidating person through God's eyes? What does God see? He sees someone lost, lonely, hurting, fighting their battles without a Savior, a sinner needing the cross. Then pray for a natural opportunity given to you by God - an easy way to get into a conversation. Our three-open prayer, "Lord, open a door. Lord, open their heart. Lord, open my mouth." Pray for the courage to take that opportunity, and pray for an approach that can begin with something they care about, with their need. And base it on your personal hope story.

I once looked at a powerful patrol boy, and I had nothing to say to him. And I should have said something to him; I had something important to say. It looks dumb to me today. Now, today someone looks almost too big to you to tell the most important news of all. Don't look back one day and say, "Why didn't I tell them?" Because when it comes to the message of salvation, silence is not golden, it's fatal.