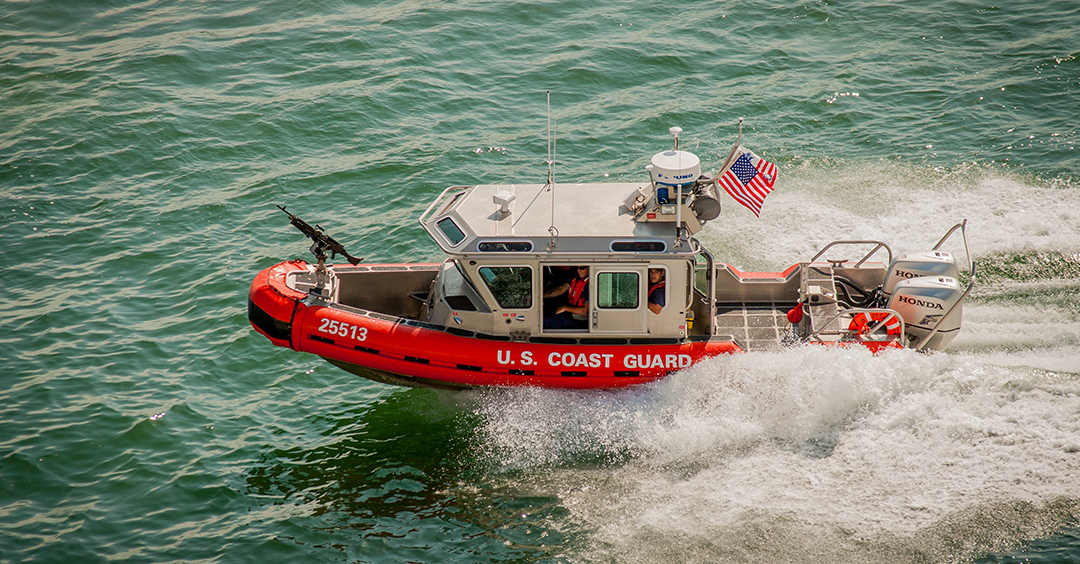 Well, there's one adventure we did have together that we all enjoyed! It was a demonstration of the United States Life-Saving Service. That's what it was actually called before it became the United States Coast Guard, and what they used to do was rescue people from ships that were in trouble. We were actually on the outer banks of North Carolina; that little barrier reef where the shoals stick out eight miles into the ocean, and where the ships used to hug the shoreline to stay close to the lighthouses, and where it is called "the graveyard of the Atlantic." Ten thousand ships have gone down off the outer banks.

That's where the Life-Saving Service operated, and that's where we saw a demonstration in full uniform of how they used to work. Here was a life-saving station set well back so it wouldn't be hurt by the storm. But, when there was a ship that had gone aground and was breaking up, the life-saving unit of eight men would run out to the beach, fire a line from a cannon to the sinking ship. Then they built a pulley system on the beach, they'd anchor it in the sand, and bring people from the ship. Sometimes that wouldn't work, so they had to run right into the surf. One of those heroes brought back ten people, one at a time, out of a pounding storm, carrying them on his back. The United States Life-Saving Service was a spawning ground for heroes. And as I watched them, I knew we still need heroes like that.

I'm Ron Hutchcraft and I want to have A Word With You today about "Heroes On the Beach."

Our word for today from the Word of God, Philippians 2:5, beginning there. "Your attitude should be the same as that of Christ Jesus: Who, being in the very nature of God, did not consider equality with God something to be grasped, but made Himself nothing, taking the very nature of a servant, being made in human likeness. And being found in appearance as a man, He humbled Himself and became obedient to death - even death on a cross!"

If I may put together that scripture with my experience with the U.S. Life-Saving Service, Jesus left the safety of the station in heaven and ran into the surf to rescue us. Now, He says, "Let this mind be in you which was also in Him."

Today we have some pretty impressive Life-Saving Stations, churches that are full of programs, good teaching, inspiring music, and they're really caring for the needs of the life-saving crew. And that's you and me. But you have to leave the station to save lives. They don't come to the door of a Life-Saving Station, knock on the door and say, "Hello! I'm drowning. Can you help me?" You have to go where they are and take the risks to do it. The Life-Saving Station is a great place to get rescuers ready. It's a great place to bring them after they've been rescued. But you've got to save them in the middle of the storm. Too many of our churches have forgotten that they're not just there for the rescuers; they're there to go out after the dying.

Maybe all your friends are Christian friends. Maybe all your free time is spent in Christian places, and yet you're surrounded by people whose lives are breaking apart like those ships did long ago, and who will die without Christ; who will spend eternity without Christ unless there is a Rescuer. And they won't come to the Life-Saving Station probably. You have to go where they are and bring them back like Jesus did.

God needs heroes on the beach today, running into the storm, taking risks like He did to rescue the perishing. My brother, my sister, It's time to get out of the station and run into the surf for the rescue.