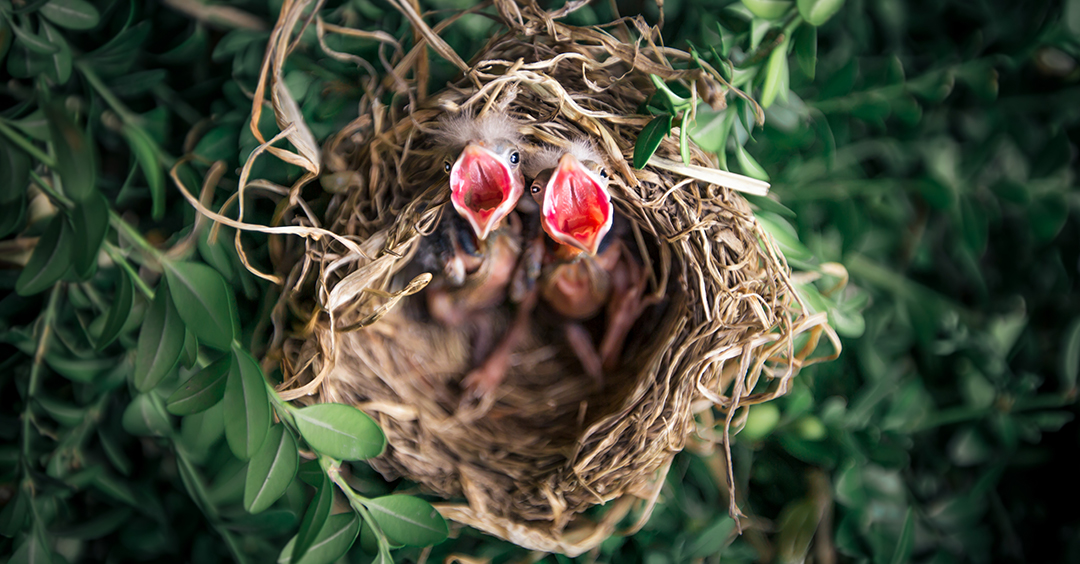 Once upon a time, a father and mother bird decided to build a nest in the vent in our kitchen range exhaust fan. We were on vacation, and the nest got so huge it made the fan unworkable. We learned it was there as we saw spiders hanging down from the hood over the stove. We really didn't want to kill a nest full of babies. By the way, we couldn't see them. No, we could just hear them when they were hungry.

So we waited until we saw mom and dad take the babies out one day. A couple of weeks later, after we were sure they were all gone, my wife and I got a long stick and we proceeded to rake out the nest from out of the exhaust fan. As the nest came out, we discovered much to our surprise the fattest baby bird we had ever seen seated in the nest! Well, we got some gloves and we got a box. And by the time we got back, he had gotten away. See, the problem was he was so fat, he wasn't able to get out of the nest.

I'm Ron Hutchcraft and I want to have A Word With You today about "Fat Birds."

Now, our word for today from the Word of God comes from 2 Kings 7:9. It's a pretty intriguing story. The capital city is under siege, and no food has gone into the city for a long time. They're starving to death, people have even turned to cannibalism to stay alive, and God is about to rescue them. Oh, they don't even know it, because He has taken the attacking army and scattered them miraculously. They have even left their camp and all their food behind.

But there were four lepers who lived outside the wall of the city, and they lived on whatever scraps the people threw over the wall, and there weren't any scraps now. They're really starving. So they figure, "Well, our best chance to survive is to give up to the other army and hope they don't kill us. That's the worst that could happen; we could die either way."

They get to the camp. The camp is empty! They say, "I can't believe this!" And they begin to gorge themselves on the food there. And then they reach this conclusion: "They said to each other, 'We're not doing right. This is a day of good news and we are keeping it to ourselves. If we wait until daylight, punishment will overtake us. Let's go at once.'"

Okay, now look, they had an abundance of food that everybody else was starving for, and they just sat around and kept stuffing themselves. Whoa! Could that be a picture of you and me and our Savior? We stuff ourselves with all the Christian stuff: the concerts, the seminars, the sermons, the websites, recordings, radio, books, Christian magazines, and Christian meetings. You get fat on the events, you hunker down in the Christian nest and kind of say, "Let's just keep nesting till Jesus comes."

Okay, let's go back to the story of the lepers. Hearing the cries of dying people coming from that city, how can we sit on all this food?" Well, how can we be focusing most of our Christian effort on just - can we put it this way - fattening up birds who are already overfed? Isn't it time you get out of this nest and begin flying into the world where your lost neighbors and friends are? You have what they need.

It's time we pray for lost friends to know Christ, and lots of other lost people. Isn't it time to turn our resources outward to save the dying instead of spending it all inwardly to feed us some more? People are dying. They go to an unthinkable eternity. Can't you hear God saying, "My Son gave His life for these lost people. Will someone leave the Christian nest and start telling them about that; start giving their lives to the lost ones?" Maybe you're the one who will say, 'Well, Lord, I will."

Ask Him to break your heart for those lost people around you. "Go ahead, God, break my heart." Ask Him to take a piece of His heart and put it into yours, because there are dying people within your reach. Don't be that fat bird just staying in the nest.