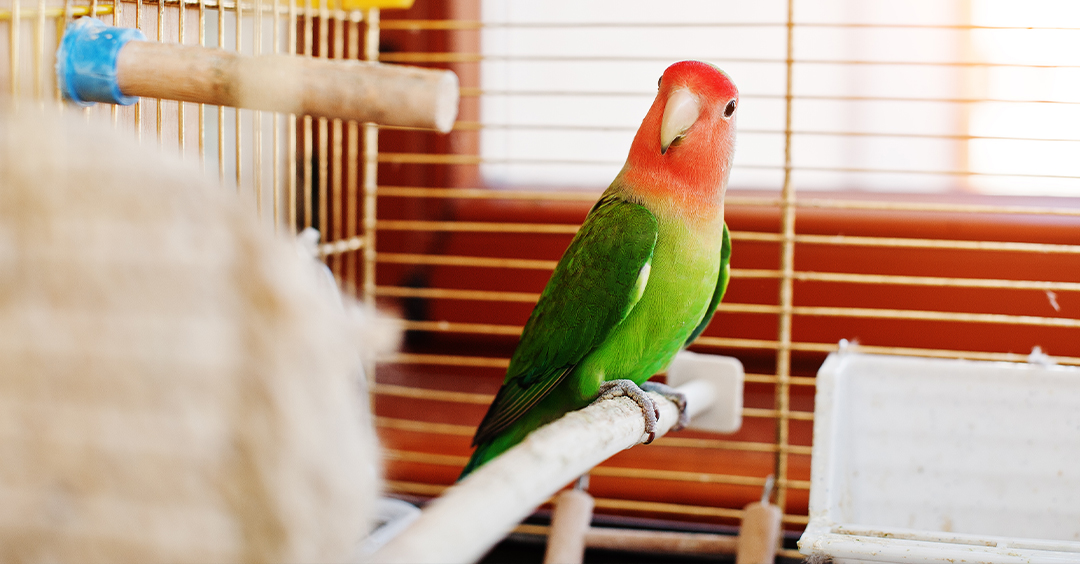 Pierre lived in a pretty small world most of the time. But that's okay, he was our parrot. We had him in this cage in the kitchen so he would be around people a lot. By day his cage was uncovered. By night it was covered, just like the bird people said to do. Since I was usually the first one up in the morning, I was the one who lifted the blanket that covered him at night.

For a while, I just opened the side that allowed him to see what was going on in the kitchen, and then it dawned on me that I was leaving the back side of his cage covered. That was the side that faced outside the house, and it gave Pierre a view of the neighborhood beyond our kitchen. So once I lifted that side of the cover, there was no way he was going to be stuck just looking in the kitchen. No, he immediately turned around! He looked out the window at that strange world out there.

I'm Ron Hutchcraft and I want to have A Word With You today about "Beyond the Backyard."

Our word for today from the Word of God comes from Matthew 24:14. It's a peek at the exciting plans of God before Jesus Christ returns. It says this: "And this gospel of the kingdom will be preached in the whole world as a testimony to all nations and then the end will come." God's people are going to be involved in the great gospel explosion; the miracle spread of the good news about Jesus to millions and probably billions who have never heard, and it very well could be happening in our day or beginning to.

The problem is Jesus said that many of His potential warriors would be asleep in the middle of it. In verse 12, just before this, He says, "Because of the increase of wickedness, the love" - and He's talking about His followers - "the love of most will grow cold." Oh, great! They're going to be all tied up in their small world - their cage; missing the big world that God wants to show them at the most decisive time in human history.

Think about the times you and I have been chosen to live in. Lost people have never been more ready for Jesus. Oh, they may not know much about Him; they may be living pretty lost lives. But the things that have made them lost have made them ready: the uncertainty, the stress, the relationship failures. They've made people realize that they need something outside themselves, but they don't know what it is. And then God's people, I don't think they've ever been more restless. There's this feeling, maybe you know what it is. I have it. That there's got to be something more, more powerful, more significant in our lives, that we could make a greater difference than we've made until now .

And then the reaching of the world has never been more possible, and the return of Christ has never been closer. Man, it's time to make a difference! What a time! It could be that like our parrot, we've been looking inward most of the time: my needs, my family, my job, my church, my little world. A lot of churches are mired in their own backyard with petty issues, committee meetings, building campaigns.

We're at an incredible moment of opportunity, but the missionary force from the United States has dropped dramatically in just a short period of time. Hundreds of missionaries are stranded in the United States because it's taking them years to raise their support. Partly because we're spending our money on ourselves instead of on this world that Jesus died for.

Right now I believe Jesus is lifting the cover off the cage of those of us who have been mired in our own little world. He's saying, "Hey, would you look outside this little window? There's a world of billions of people I died for; most of whom have no one to tell them." And did you know that every day 150,000 people go into eternity ready or not? Probably not. And today they will, and tomorrow they will, and the day after that they will. Jesus said, "The fields are ready for harvest; look at the fields."

Isn't it time you begin to invest the best of your energy, the best of your money, your gifts, your influence in the cause for which your Savior sacrificed everything? These are days we need to be working together.

There's a whole world out there. Don't keep staring at the little world just around you. Remember what the Bible says, "God so loved the world." He wants you to love it too.