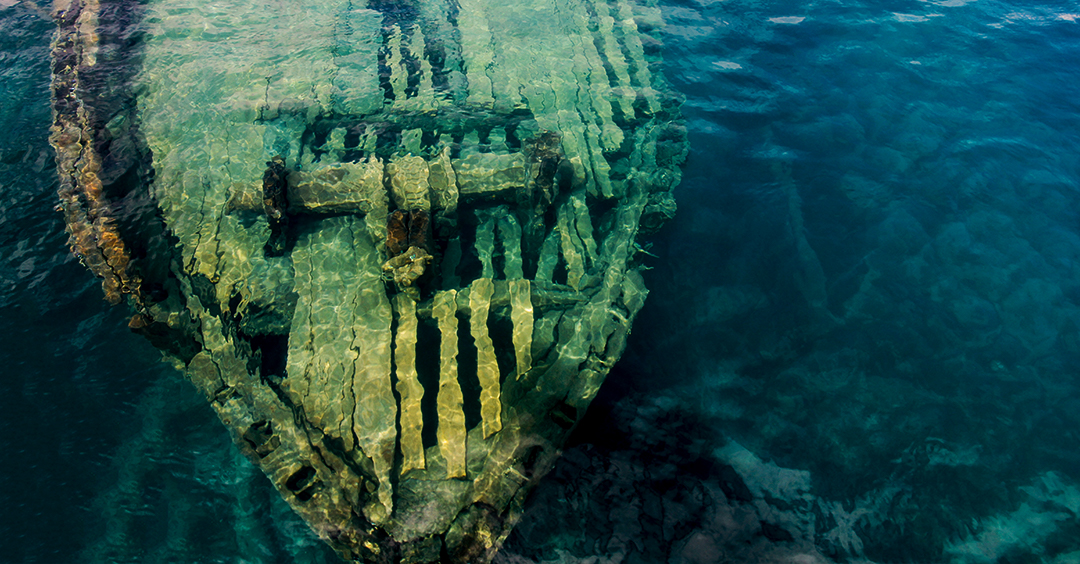 The Titanic couldn't miss that iceberg. These days, you can't miss the Titanic. Ever since they found the unsinkable ship where it sank two and a half miles beneath the sea, there's been a rekindled fascination with the Titanic. As they have studied the wreckage with the latest underwater technology, they've discovered some surprising new information about what happened to the grandest ocean liner in history. It was the equivalent of four city blocks in length! Now most people have probably pictured the Titanic plowing into this huge iceberg and opening up a gaping hole in it. But now we know that the Titanic basically just sideswiped that iceberg; in fact, many passengers didn't even know anything had happened. And it wasn't some gaping hole that sank the unsinkable ship. It was what one newspaper called, "small wounds that doomed the Titanic." There were six relatively small punctures in the hull - "pin pricks" according to a TV special on the subject. Here's a ship that was 95,000 square feet in size, and it was sunk by little leaks that one article said, all put together, would have been about 12 square feet - about the size of a door!

I'm Ron Hutchcraft and I want to have A Word With You today about "Small Leaks."

That's all it takes to sink a mighty ship, or a mighty man or woman of God. Song of Songs 2:15, our word for today from the Word of God says, "Catch for us the foxes, the little foxes that ruin the vineyards, our vineyards that are in bloom." Big vineyard ruined by little foxes. Big ship sunk by small leaks. It's no wonder that God's wisdom tells us to catch the little foxes, or stop the small leaks. Don't wait for them to get big.

So many people who were growing in Christ and making a difference for Him have tragically sunk - human Titanics - because of what seemed to be small moral or ethical or spiritual leaks. So small that they didn't think they could do any damage; so small they didn't need to be dealt with. So small nobody noticed. Well, they were dead wrong. Leaders have sunk from those small leaks, entire ministries, marriages, reputations, businesses, and many followers of Jesus.

It might not be a major crash that could bring you down. It might be just a seemingly minor scrape. But if you underestimate the power of sin and compromise, even if it seems small at the time, you'll discover too late the deadly damage it can do.

Honestly, now, where is the small spiritual leak in your life? Maybe it's just a small financial compromise, a little lie, a little flirtation with sexual sin, or some small fantasies that are setting you up for a major fall. Maybe you're dating someone you know you shouldn't be, you're watching or listening to input that's slowly wearing down your resistance to sin. Or maybe it's just a little gossip, a little complaining, a little bad attitude, or a little spiritual vacation.

But little leaks like those are big enough for you to start taking on the water that can sink you. If you can't see where the water might be coming in, then pray David's insightful prayer, "Search me, O God, and see if there be any wicked way in me." Remember, Satan seldom destroys people by explosion. He does it by erosion - that gradual wearing you down that eventually prepares you for the big cave-in where you end up going where you were sure you would never go.

Maybe God is trying to send you a warning through this little visit today, to go after those little foxes, to plug those small leaks before you lose more than you could have ever imagined. It happened to the Titanic; it can happen to you. But it doesn't have to if you act now.