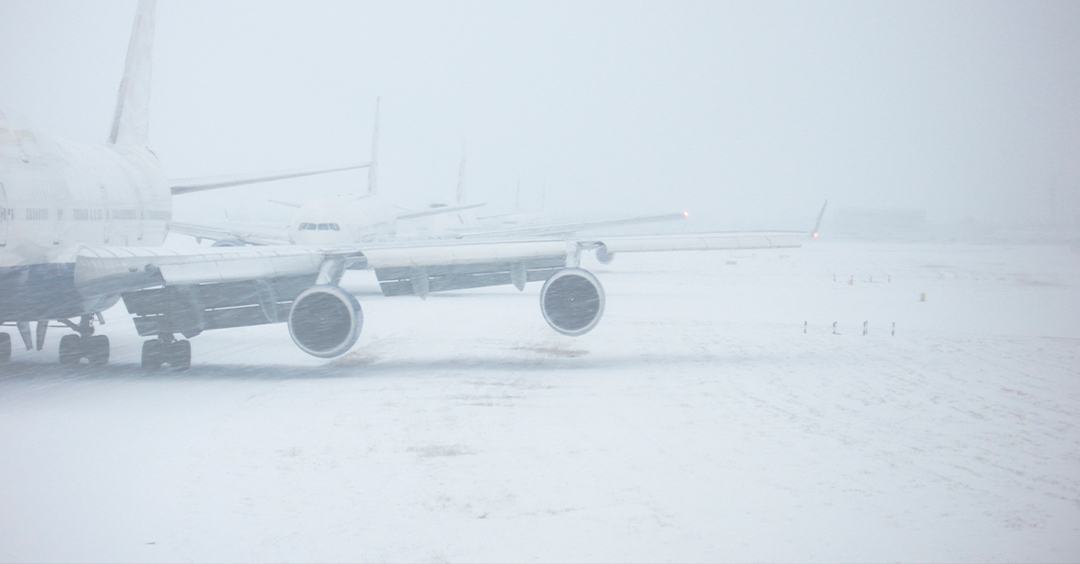 I usually leave airplanes to the experts. I fly on commercial airplanes and I don't usually give a lot of thought to the maintenance or the flying of the plane - usually, but not on a very wintry day in Toronto. The plane was warming up at the gate, all the passengers were seated. I was as usual really busy at work until I glanced out of the window at the wing which was covered with snow and getting more covered. Now look, I don't know a lot about airplanes technically, but I know you have to de-ice them before you take-off. Yeah, a little ice on the wings affects the lift on an aircraft and causes you to go "boom." Now, I'm used to the de-icer truck taking care of things at the gate before we leave, and we were preparing to leave the gate iced and snowed. Finally, the pilot told us that they would do that on the runway which is actually a better idea. But I told my wife later that if they hadn't done something about those wings, I was off that plane. I mean, it's unbelievable how much damage a thin layer of ice can do.

I'm Ron Hutchcraft and I want to have A Word With You today about "How to Avoid a Spiritual Crash."

Our word for today from the Word of God is about, well I guess you could say, crash prevention in your life. Hebrews 12:1-2 - "Let us throw off everything that hinders and the sin that so easily entangles. And let us run with perseverance the race marked out for us. Let us fix our eyes on Jesus." Actually this verse is talking about a runner not a flyer, but the principal is still the same: get rid of anything that's slowing you down or hindering you. I think pilots call it drag.

Now in terms of your commitment to live for Christ, are there too many days when you've crashed? The same old sinful attitudes or thoughts; same old reactions keep tripping you up? Or you go through the day depressed and discouraged instead of with the joy you used to have. Or you just forget about God a lot of the day. Your crashes haven't been fatal, but they've done too much damage. The problem may be a thin coating of sin, a compromise on your wings. It doesn't take much to bring you down. That's why the Bible says to deal with it forcefully and aggressively. It says, "throw it off." Personal purity is not a passive thing. It actively attacks anything that's a drag on your flight plan of following Jesus.

Every new day means another take-off into that day - people, pressures, temptations. Before you leave the gate, be sure you de-ice. Spiritual flight preparation means you get on your knees before your Savior and you pray through what you know will be the temptations of that day. Anticipate them; walk through them with Jesus before you get to them. Claim His power for each one. Commit yourself to send Him to the door when that temptation knocks.

There are going to be surprises, but you'll be ready for them if you've prepared yourself for the ones you know are coming. One major source of spiritual ice on your wings is a negative, complaining attitude. Has there been too much of that? It will make everything look dark all day long. Lose it at the beginning of the day and replace it with praise and thanks.

De-icing also means checking your motives before you take off. Ask the Lord to expose any things you might be doing for your own glory, or out of bitterness, or jealousy, or to get your own way. Throw it off! And ask the Lord to show you where there's any breakage in your relationships, and make that right with God and then later make it right with that person.

As you examine your day looking at it through Jesus' eyes, you'll begin to see the weight that can bring you down. Get rid of it there before you're airborne and it's too late. You can prevent a lot of crashes if you deal with what could cause a crash before you ever take off.