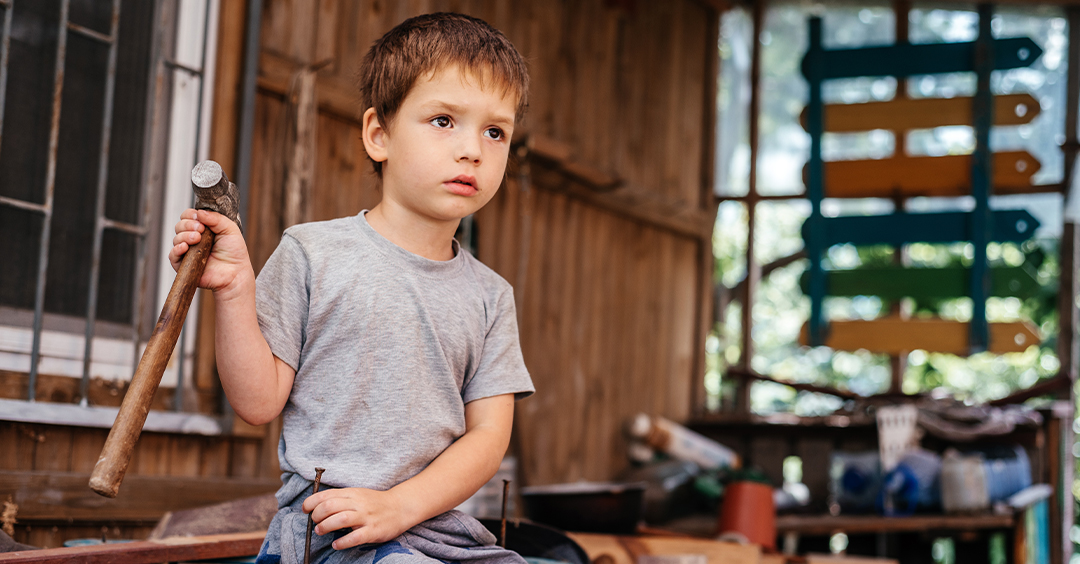 So, is a hammer a good thing or a bad thing? I guess it depends on whose hands the hammer is in. Had you put a hammer in the hands of our little grandson and turned him loose, you wouldn't like the results. He was probably going to do some damage with that thing. But I've watched that same kind of hammer do some really good things in the hands of some skilled workmen; of which I am not one. At our home, our office, I've seen a hammer used to build some things that are really useful. That same hammer in a child's hands, though, "Look out, man!"

I'm Ron Hutchcraft and I want to have A Word With You today about "Why You're Getting Hammered."

Suffering, pain, hardship, heartache - those are some of life's hammers. You may feel like one of those hammers has been beating on you lately. What you may not realize is who's holding that hammer and what He's trying to do with it.

It was something the prophet Jonah figured out in the belly of a great fish. You might remember the story: Jonah had been called by God to deliver God's message to the evil city of Nineveh. Jonah didn't want to. He tried to run from God, actually a whimsical thought if you consider it for very long, by getting on a ship to a faraway place. (Of course God wouldn't know about this place would He?) A violent storm engulfed that ship. It endangered the lives of everybody on board. Jonah knew the storm was for him, and he urged the sailors to throw him overboard so they could be saved. As he hit the water, he was scooped up and swallowed by what the Bible calls a "great fish."

Miraculously preserved in the belly of that beast, Jonah, it says, "prayed to the Lord his God." His answer is perspective and it is our word for today from the Word of God. It's Jonah 2, beginning with verse 2. "In my distress I called to the Lord, and He answered me. From the depths of the grave, I called for help, and You listened to my cry. You hurled me into the deep (Now notice, not the sailors, but You, Lord, hurled me in) into the very heart of the seas, and the currents swirled about me; all your waves and breakers swept over me." Notice here, Jonah looks beyond what people did to him and what the weather did to Him and he sees that those were just hammers in God's hand - not to destroy him but to finally build him into what he needed to be.

The hammer that hits us in our life can either break us or build us. If we'll turn to God when we're getting hit, look for His purposes, look for His message in it, that hammer can build us into something we've never been before. If we don't turn to God when we feel the hammer blows, we'll get the pain but not the point. Ultimately, the suffering that we face is not from those people, or that condition, or the economy, or that situation that seems to be hurting us. It's either been sent by God or allowed by God, the God who loves you enough to have His Son die for you.

Like Jonah, God could be using your storm to bring you back to some promises you made to Him - promises you haven't kept. You told Him you'd go "anywhere" for Him, but you haven't. You made promises about your priorities (Remember?), your family, your giving, your service to Him, but you've drifted from those promises. Maybe you told God you'd abandon some sinful ways, but your repentance has lapsed and you're drifting back to the old you.

But God is pounding on you with His loving hammer, trying to get this storm to wake you up and bring you back. It's taking the pounding to get your attention. C. S. Lewis had it right: "God whispers in our pleasure, but He shouts in our pain." These hits are, in the words of Psalm 148:8, "stormy winds that do His bidding." Their purpose isn't to hurt you, but to heal you; not to wreck you, but to restore you. The storm isn't to blow you away; it's to blow you into God's arms!