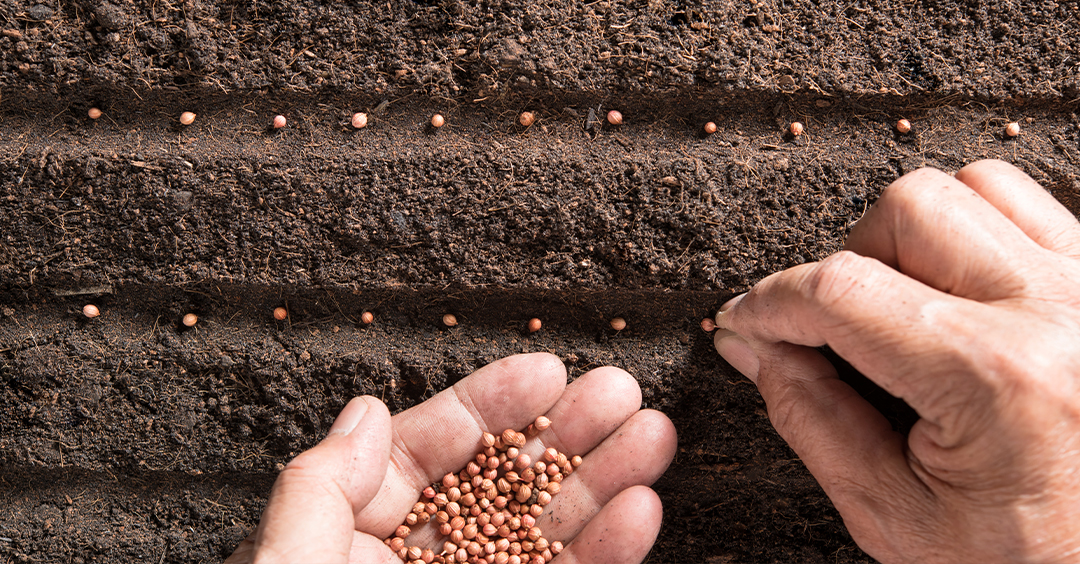 I seem to vaguely remember this old nursery rhyme from when I was a kid. It went like this: "Mary, Mary, quite contrary, how does your garden grow?" If you asked our grandsons that question, they'd probably say, "Real slow!" Maybe that's why Mary was so contrary. There was a spring that the boys worked with their Dad to clear a little area in the yard where they could have a vegetable garden. And they were all excited about planting those seeds in the ground: tomato seeds, green beans, carrots, and lettuce. They went out the next day to look at what they had planted. Nothing. Then the next week, and the week after that. They watered the garden when it didn't rain. They pulled up weeds. For the longest time, they went out to that garden to see what was happening. Guess what was happening? Nothing...or so it looked. Had they tried to dig up the seeds to see if anything was happening, they would have ruined everything. But you know the story. It finally happened: The tomatoes and beans and carrots and lettuce. It just took a little while.

I'm Ron Hutchcraft and I want to have A Word With You today about "When Nothing's Happening."

Something had been happening all along to those seeds. Right? Just because you can't see what God is doing doesn't mean He isn't doing anything! In fact, that may be something important for you to remember right now. You've been praying about that need, that situation, that person for a long time and it just looks like nothing's happening. Key words: looks like. When a seed's been planted, it looks like there's nothing going on for some time until that plant breaks through and ultimately produces some wonderful fruit. When a new life has begun in a woman's body, it doesn't look like anything's happened for quite a while. But every day, that life is growing where we cannot see it grow. Until it first reshapes that mother's body and ultimately appears as that precious little baby being born.

The problem is that when it looks like nothing's happening, we tend to say, "Well then, I've got to do something!" And most often, it's the wrong thing - take it from me - digging up the seed to see if it's growing. In 1 Samuel 13, beginning with verse 7, our word for today from the Word of God, we've got a sobering example of how much we have to lose when we can't wait for God to do it His way. Saul, who's Israel's first king, has been told by God's man Samuel, "Go down ahead of me to Gilgal. I will surely come down to you to sacrifice burnt offerings...but you must wait seven days until I come to you and tell you what you are to do."

With the Philistine forces massing against them, the Bible says, "Saul remained at Gilgal, and all the troops with him were quaking with fear. He waited seven days, the time set by Samuel, but Samuel did not come to Gilgal, and Saul's men began to scatter." Saul panicked, and he did what no king was allowed by God to do: he offered the burnt offering himself and he crossed a sacred line. And "just as he finished making the offering, Samuel arrived." And Samuel asks, "What have you done?" Saul answers by talking about what "I saw"... "I thought"... "I felt." Samuel says, "You acted foolishly. You have not kept the command the Lord your God gave you...now your kingdom will not endure."

Saul forfeits the major legacy of his life because of disobedience that disqualified him; a disobedience that came because he couldn't wait for God to do it His way. You and I are so prone to make that same mistake. Nothing seems to be happening, things are starting to fall apart, and it looks like we're at the point of no return. So we take matters into our own hands and, in so doing, we ruin what God was going to do.

God is so often the God of the eleventh hour. He waits until the moment when everyone will know it had to be Him. He waits so our faith can stretch farther than it's ever stretched before so He can do greater things for us than He's ever done before.

God's working in ways we can't see, so ultimately something beautiful will be born for all to see. So, as the Psalmist says: "Commit your way to the Lord; trust in Him and He will do this...be still before the Lord and wait patiently for Him" (Psalm 37:5, 7).