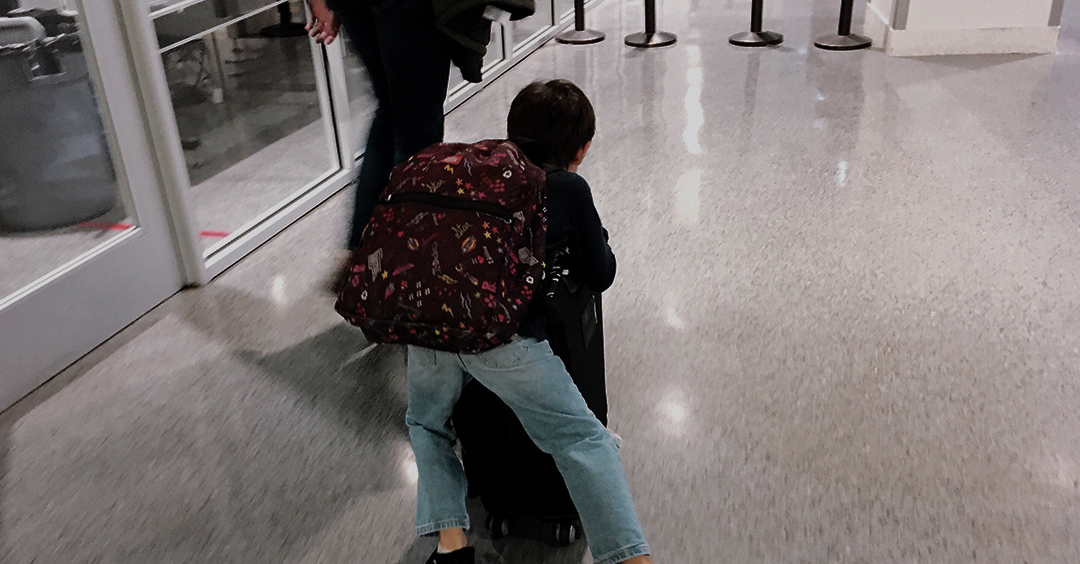 I saw this precious sight at the airport. There were a hundred bleary-eyed travelers waiting for luggage at the carousel. Maybe you've been one of those. That wasn't the precious sight I saw; nothing precious about that. But I heard this little exclamation behind me. It was a little boy barely old enough to be walking, and he was standing next to his Daddy. Now, his Dad had apparently just returned from a business trip, and next to him on the floor was his big old briefcase. Well, the little guy, using all his strength, fully extending his body is trying to push his Dad's big briefcase. The briefcase was just about bigger than the little boy was. There was no way he could pick it up, but he was trying; pushing and pulling with everything he had. It was something I'm sure his father could handle easily, but the little guy? He was just too weak to push it.

I'm Ron Hutchcraft and I want to have A Word With You today about "Trying to Carry Your Father's Load."

As David writes to us in our word for today from the Word of God in Psalm 55, he's pushing or trying to carry a very heavy load. Verse 2: "My thoughts trouble me." Now, you may be able to relate to some of what he says about his load. He says, "I've really got a lot of inner turmoil right now." Now verse 11, "There are destructive forces at work in the city." Hey, you may have some of those destructive forces in your life right now. Then in that same verse he says, "Threats and lies never leave its streets." Maybe you've got a little of that going on in your life.

And in verse 18 of Psalm 55 he talks about "the battle being waged against me. Many oppose me." Has that come up on any of your load yet? Then in verse 20 he says, "My companion attacks his friends; he violates his covenant." Maybe you can share in that part of the load where someone that you've trusted and loved has turned on you and hurt you, even violated a covenant.

That's a lot to push. That's a lot to carry. You might be doubled over right now with your load. I want you to hear David's bottom line in the midst of all this weighty problem he has. Verse 22: "Cast your cares on the Lord, and He will sustain you. He will never let the righteous fall." Man! Isn't that awesome! What a promise!

What are you doing pushing that load of yours; trying to carry it yourself? "Give it to Me" God says. "Cast your burden on Me." Maybe you're missing the peace that comes from release. And it's said so many times through the Old Testament, like when David was up against Goliath, David said, "The battle is David's." No, he did not. "The battle is the Lord's." You need to remember that in your battle. This isn't your battle. Send your Father to fight it. Let your Father carry it. This is a load you were never meant to carry.

David struggled to keep it released. He says in Psalm 55:17, "Evening, morning and noon I cry out in distress and He hears my voice." All day long you've got to have this repeated releasing of that load; the one you've tried to carry yourself. And your Father is looking at you like that father was looking at his little boy at the airport. Kind of saying, "Why do you insist on collapsing under a burden that I could carry so easily?"

There we are, the little guy trying to lift the load of responsibility that we are just too weak to carry. You can burn out trying to carry it by yourself. Here's the great news. Your Father stands ready to carry it for you.