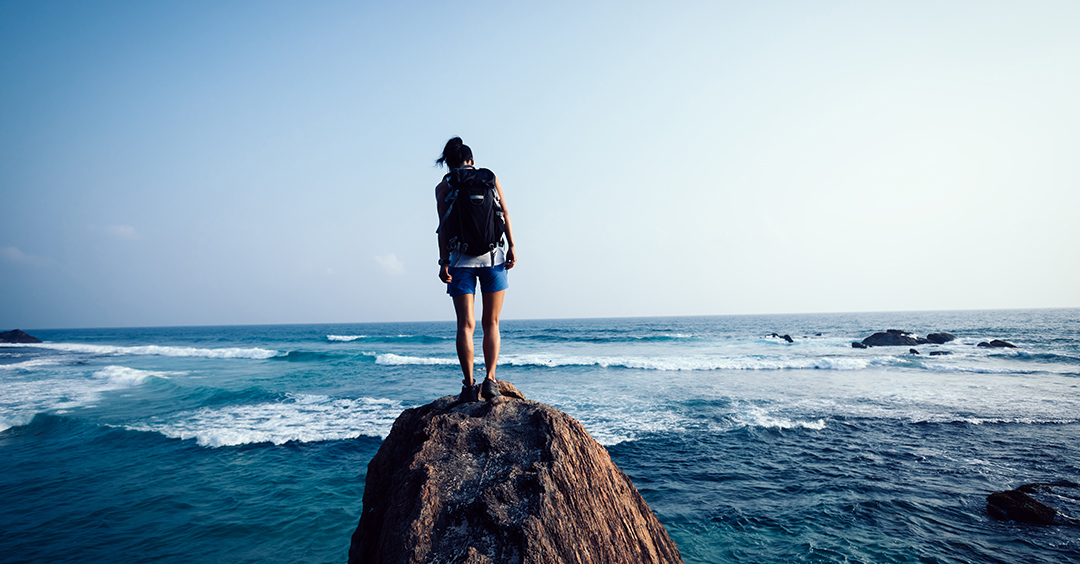 No matter how big you expect the Grand Canyon to be, it's bigger. And when our family has had the privilege to visit there, we've all been impressed with this awesome, divine masterpiece. One big problem there though has been our boys, because they think they're part mountain goat. Of course, mountain goats cannot read the signs that tell you to stay behind the fences. Apparently, our boys couldn't read them either. They always had this irresistible urge to venture out as far as possible on those rocks that overlook the canyon. Of course, one false step, and it's over – actually, you're all over. All our lectures about going too far for safety's sake made a lot more sense the morning after we had stopped at one particular overlook. The morning paper reported that on the same afternoon we had been there, two young men went to that same overlook and one never came back. He ended up dead at the bottom of the canyon. The reason? Yeah, you know. He got too close to the edge.

I'm Ron Hutchcraft and I want to have A Word With You today about "Too Close To The Edge."

God has a word today for someone who's hurting, who's depressed and might be getting too close to the edge. Maybe there's this voice inside you, or someone you know, that's saying, "Life just hurts too much. Maybe I should just check out once and for all." You're looking over the edge of that abyss called suicide.

You need to know where that voice is coming from. Our word for today from the Word of God is John 10:10. "The thief comes only to steal and kill and destroy; I have come that they may have life, and have it to the full." That was Jesus speaking. Two voices: one is the life-taker – that would be the devil, who wants to destroy you. The other is the life-giver – Jesus, who thought you were worth dying for. Any thoughts of ending your life, I can tell you, are from the Devil himself. And you cannot let him take you over the edge and rob you of all the tomorrows God has planned for you.

That edge of the cliff called suicide can only be a consideration if you do not realize how tragically expensive suicide is. First, it's the ultimate act of defiance toward the God who made you. In Psalm 139:13 and 16, it says, "You created my inmost being (God); You knit me together in my mother's womb... All the days ordained for me were written in your book before one of them came to be." Only the One who gave you your life has the right to end your life. And He's the One you meet the moment your life is over. You don't want to go into eternity defying the God you are about to meet.

Suicide, in many ways, is an ultimate act of selfishness toward the people who love you. You don't mean for it to be, but I've been on the other end of this. They never recover from the awful agony of this decision. Don't do this to them. You know, suicide is the ultimate waste of a life that Jesus actually gave His life for. He didn't die on the cross just to have us throw away the life He gave everything for. One last thing – suicide is an ultimate surrender to the spiritual enemy who hates you.

Look, maybe you've gotten too close to the edge recently. You've been thinking about suicide as an answer. A lot of people have, more than we realize. But, believe me, living is always better. Jesus said, "I have come that you might have life." Right now, instead of giving up, would you give it all over to Jesus? Pour out all that pain and all that struggle at the feet of this One who loves you most. He said, "I was sent to bind up the brokenhearted." And please talk to someone today about your struggle – a pastor, someone on a hot line, a counselor who's maybe walked through this with a lot of other people. Whatever the risks there are of you reaching out and talking about it, they can't be as expensive as giving up.

The Lord wants you to live – to have all your tomorrows. That's why He sent you this message of life today where you could hear it. Please get away from the edge. Don't go near it again! In God's own words from His book, "Choose life!"