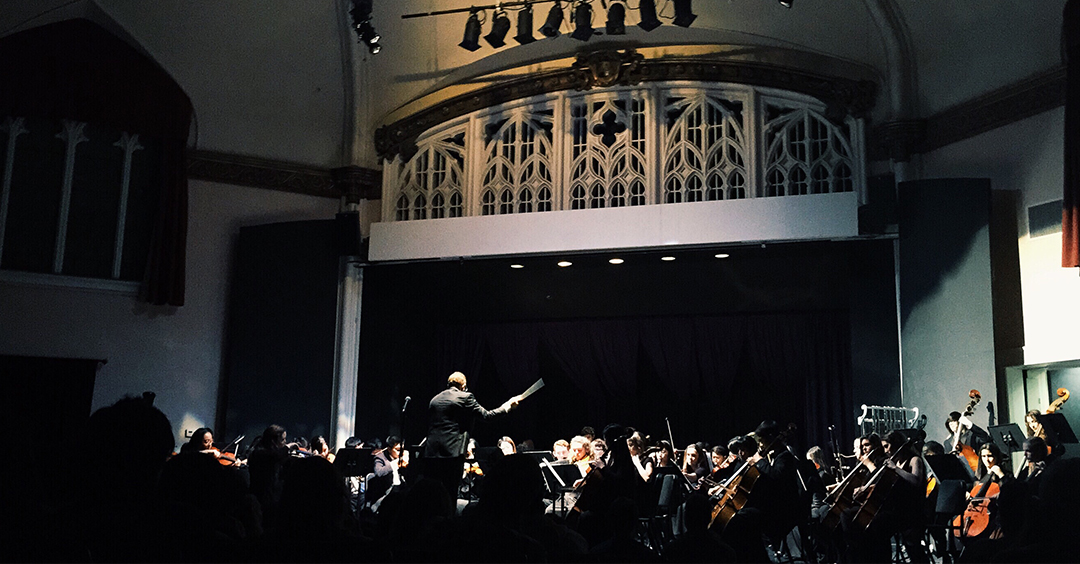 We were in our seats waiting for the curtain to open on this great, family-oriented stage show. I knew it must be show time, the lights went down, and unobtrusively the live band quietly filed into the orchestra pit. Most people were focused on the stage, but I was fascinated by something I saw going on with the band. One woman in the band had the arm of a fellow band member on her arm. She was obviously leading him to his position at the keyboard. Then I realized with amazement that the keyboardist was blind. He put on his big headphones and, as the curtain opened, he started playing with all his heart. It was awesome!

I'm Ron Hutchcraft and I want to have A Word With You today about "The Music That's Always There."

I'll tell you, it was really inspiring. That musician cannot see, but he can still hear the music! He can still play the music! I hope you can, too, no matter what limitations you're facing right now.

Look at the model Paul and Silas gave us in our word for today from the Word of God in Acts 16, beginning with verse 25. The preceding verses tell us that these two missionaries have been attacked by a crowd, and they were incited by false accusers. The Bible uses these words to describe what Paul and Silas had to go through: they were "stripped," "beaten," "severely flogged," and "thrown into prison." Then the Bible says they were put "in the inner cell" and their feet were "fastened in the stocks." That's enough to beat the song out of anybody.

But according to our word for today from the Word of God, "about midnight Paul and Silas were praying and singing hymns to God, and other prisoners were listening to them." The Bible goes on to report that when an earthquake shook that prison, the jailer himself came running to Paul and Silas for help. He and his whole family came to Christ that night!

There's something very compelling about someone who refuses to be taken down by the worst of circumstances, who can still hear God's "music," who can still play God's "music" no matter what. Now, that "music" is a positive attitude; that quality of "un-sinkability" that the Bible calls...right, JOY! The "music" is conversation that keeps finding things to thank and praise God for instead of things to complain about.

Maybe you're in a season right now where you've been sidelined. You feel set aside, held back or restricted. You're in a situation or maybe you have a condition that's making you very aware that you're really limited. Not all prisons have physical walls do they? It's easy to get frustrated, self-pitying, negative, maybe bitter. But you can choose, as Paul did, to continue instead to enjoy your Lord; to still make His music for others. In fact, people will listen to what you have to say about Jesus because of what you're going through.

Centuries ago, the poet Richard Lovelace wisely observed, "Stone walls do not a prison make, nor iron bars a cage." He went on to say, "If I have freedom in my love, and in my soul am free, angels alone, that soar above, enjoy such liberty." Your soul can be free, no matter how imprisoned the rest of you may be.

Paul later said, "We are hard pressed on every side, but not crushed; perplexed, but not in despair; struck down, but not destroyed" (2 Corinthians 4:8). Yes, he had a lot to handle, but that didn't stop him from hearing God's music - from playing God's music.

No matter how blinding, how deafening, how paralyzing your situation, the music of God is always there for those who choose to hear it.