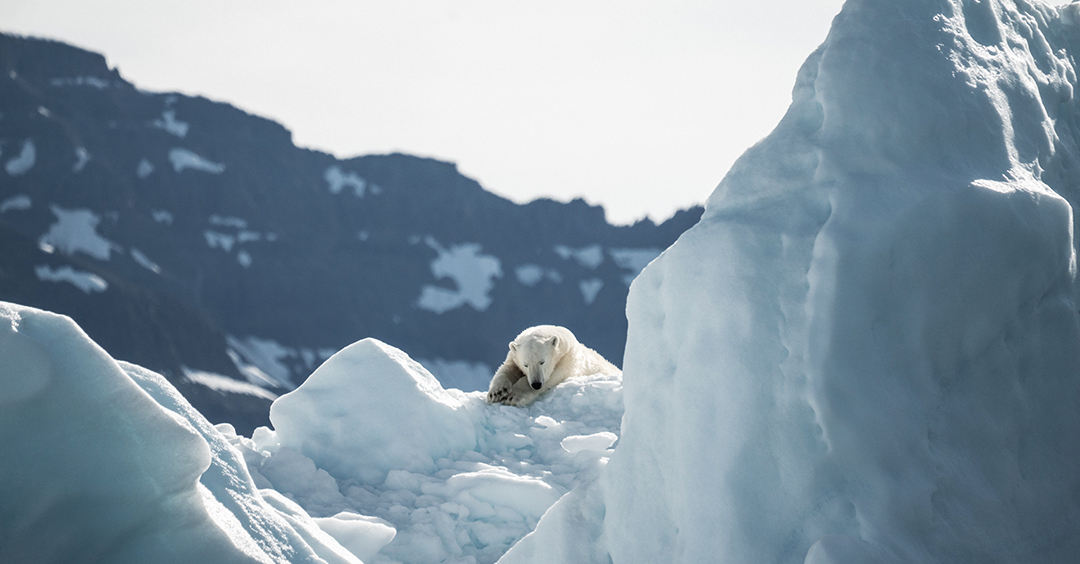 Skiing to the North Pole - now that's an adventure. Apparently, a documentary producer thought so, too. That's why I got to learn about that adventure a little was watching it on TV. Needless to say, Skier Man had many unpredictable and perilous moments as he encountered weather challenges, terrain challenges and, of course, some really big animals. Like the polar bear he suddenly came upon with her babies. Mama Bear wasn't too happy to see this strange creature coming in her direction and her little ones. No, Skier Man had to think fast, and he did. He raised his ski poles over his head; held them up over his head like some gigantic metal antlers. Even though the polar bear was much bigger and more powerful than he was, she backed off. Skier Man had succeeded in creating the illusion that he was bigger than the bear!

I'm Ron Hutchcraft and I want to have A Word With You today about "Smaller Than it Looks."

There have been times when I have believed that same kind of illusion the polar bear fell for; that a problem coming at me was much bigger than it really was. There are times we should stand and fight, and instead we run away from something that looks too big for us to face. It may be that you're facing a problem right now; it could be financial, medical, relational, parental, a family problem, a failure...something that looks so huge you're paralyzed; you're panicked.

God's got a word for you today from the Word of God in Nehemiah 4, beginning with verse 10. Nehemiah has been leading God's people in the amazing rebuilding of the walls and the gates of God's city, Jerusalem, surrounded all the time by enemies who are determined to stop that rebuilding. The problems are looking just about overwhelming as maybe yours look to you right now.

Here's what it says: "The people in Judah said, 'The strength of the laborers is giving out, and there is so much rubble we cannot rebuild the wall.' Also, our enemies said, 'Before they know it or see us, we will be right there among them and will kill them and put an end to the work.' Then the Jews who lived near came and told us ten times over, 'Wherever they turn, they will attack (you).'" That's a pretty daunting list of problems right there. They're running out of strength, there's a huge pile of junk in the way, their enemy is threatening to attack and kill them, and they've got people telling them ten times over (Who needs that?) how much trouble they're in. Those people always seem to show up by the way.

But God's man Nehemiah has a message for them. And it's for you and me, too I think, as we cower before challenges that seem so massive. He says, "Don't be afraid of them. Remember the Lord, great and awesome, and fight for your brothers, your sons and daughters, your wives and your homes." Yeah, the problems look big. But (He says) you've got a God who is so much bigger than they are. The problems aren't great and awesome; your Lord is great and awesome!

And as Nehemiah said moments later, "Our God will fight for us!" The issue isn't how big the problem is compared to you. It's how big the problem is compared to your God! The only thing that should ever overwhelm a child of God is the awesomeness of their Lord. If you're afraid, if you're defeated, it's probably because you've forgotten who's in charge here. It won't be what's looming in front of you that will decide the outcome for you. Your Lord's going to decide the outcome. You're His child!