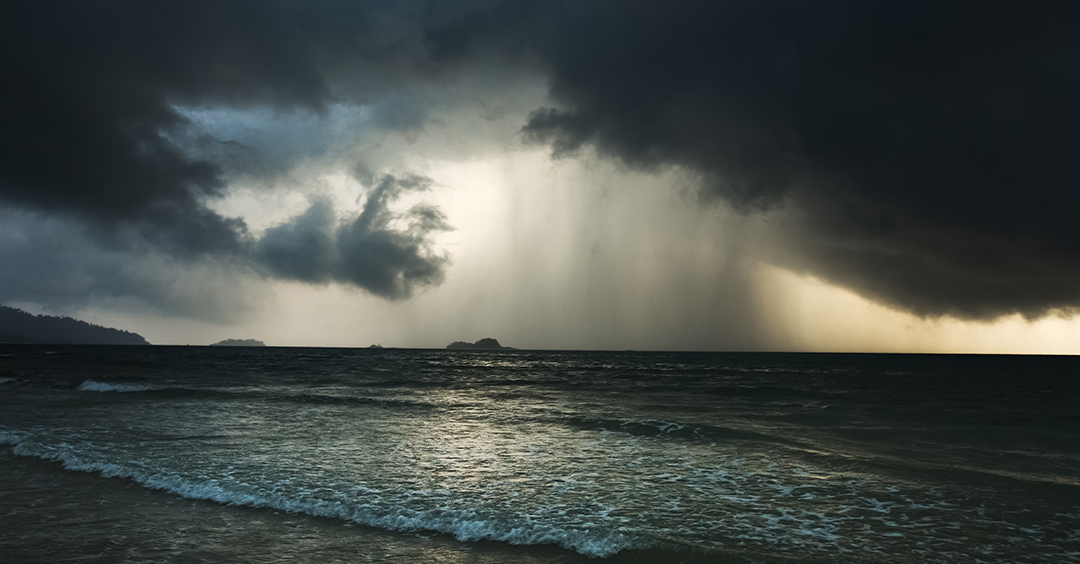 It must have felt like a scene from the book and the movie called "The Perfect Storm." Their vessel was a 61-year-old wooden fishing boat, making the Inside Passage from Sitka, Alaska to Port Angeles, Washington. It was supposed to be a one-week trip. It was late in the season - a time of year when wild storms can develop. They sink ships; they take lives. Sure enough, their boat hit hurricane-force winds that threatened to take them to the bottom. At one point when green water washed over the pilothouse and the boat plunged for what seemed to be the bottom, one passenger heard the captain mutter beneath his breath. But as this 30-year veteran of Alaska's ferocious storms worked that wheel, he turned to his passenger, smiled and said two words, "No problem." No matter how vicious the storm became, no matter how perilous the situation seemed, the captain remained calm, and he helped steady his very frightened passengers...and they made it.

I'm Ron Hutchcraft and I want to have A Word With You today about "Navigating Your Storm."

A calm captain who has been through these fearful storms before, who knows everything will be okay at the end of the day and has brought so many others safely through. Now, that's what makes the difference when it feels like the storm is going to sink you. If you belong to Jesus Christ, you have a Captain like that! That's why the writer of "Amazing Grace" could write: "Through many dangers, toils and snares, I have already come. 'Tis grace hath brought me safe thus far, and grace will lead me home."

Right now you might be going through a storm that has shaken everything you have. Sometimes it feels like you're headed for the bottom. You're afraid. You're discouraged. You're panicked and desperate. You need to get close to the Captain of your life right now and remember who is piloting your boat. Unless, of course, you've grabbed the wheel from the Captain or if you've jumped overboard in panic.

The Old Testament hero, Daniel, knew well what it was like to be hit by life's hurricanes. As a boy, he had been forcibly moved by invaders from his country to a strange country and to the culture of Babylon. He faced the demands of a pagan culture, even the death sentence of a lion's den, from which, of course, God delivered him. In Daniel 7, where we find our word for today from the Word of God, he has just been given by God this frightening prophetic vision of the turbulent world that was to come with images of a ravenous lion, a vicious bear, an inescapable leopard, and a rapacious beast that crushes and devours everything it touches.

Then, the Bible says in verse 9, "Thrones were set in place, and the Ancient of Days took His seat...thousands upon thousands attended Him; ten thousand times ten thousand stood before Him." Then the Son of Man approaches that throne and it says, "He was given authority, glory and sovereign power; all peoples, nations and men of every language worshiped Him... His kingdom is one that will never be destroyed." Wow! So let the lion roar, let the bear threaten, let the leopard pursue. There is a throne with authority over every beast, every storm, every disease, every enemy, every tragedy, and your awesome Lord sits on that throne.

There is not one thumb-breadth of this universe that is not under His control! And whatever has come into your life has had to pass through His hand first. He's either sent it or allowed it. And He loves you and He knows what you need. He knows what you can handle, so long as He is at the wheel.

A friend of mine tells of years of struggle with violent storms that hit his family. He said it was as if God kept falling off His throne. Well, He never has and He never will. And He is in command at this very moment. Relax in His sovereign control. He's brought every one of His children in every generation through every storm, and He'll bring you through. The storm won't decide what happens to you - your Captain will!