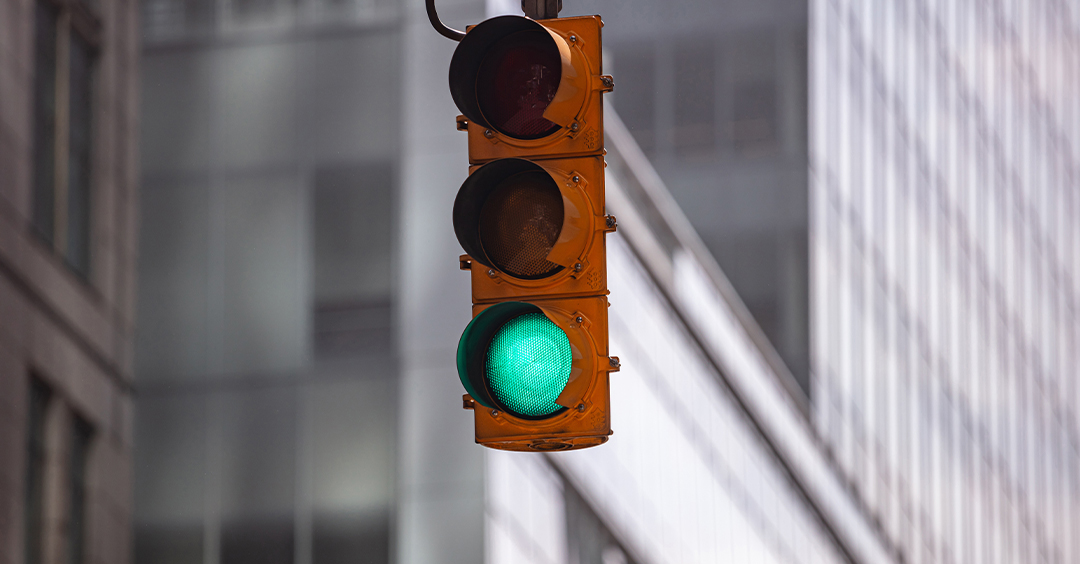 There's this island on the New Jersey Shore that our family loved to go to when we had a holiday weekend. After you cross the causeway from the mainland, you enter an island that's long and it's really narrow. In fact, at many points, you can drive right along that long street that runs through the center of that island and you see the bay just to one side and the ocean right there on the other side. I've driven that long street many times. Because it's flat, you can see the traffic lights way ahead of you. Often, I would start off with a green light in front of me and I'd be looking at some red lights up ahead; maybe a long line of red lights. But as I approached them, those reds would turn green, and I kept going. You'll be happy to know that when I came to a red light, I stopped - like the good boy I always am. You knew that!

I'm Ron Hutchcraft and I want to have A Word With You today about "Green Lights and God's Will."

For some folks, when you just say those words "God's will," the fog starts rolling in, they hear mystical music, and their blood pressure goes up. This business of knowing what God's will is seems so hard for many of us. But, of course, God didn't create a plan for your life to torture you with it. He wants you to know what He wants you to do, but in the way that will keep you closest to Him.

Now about those traffic lights on that long, straight street. They might actually help us visualize how a child of God knows and does the will of God. Let's get some guidance first from our word for today from the Word of God in Psalm 37:23-24. "The steps of a good man are ordered by the Lord, and he delights in his way. Though he fall, he shall not be utterly cast down; for the Lord upholds him with His hand." Notice how God directs us; it's our steps! He doesn't show you the whole plan. You'd either run to it or you'd run from it and either way, you'd ruin it. You can only take one step at a time anyway, right? So He shows you the next step. God's macro-will for your life is made up of thousands of micro-wills. Like for today, it's "take a step, see a step." Remember that, "take a step, see a step."

When I'm driving that island highway, I don't wait until every light I can see turns green. I go when the one right in front of me turns green, and I keep driving toward the next light. As long as the lights are green when I get to them, I keep going. When I get to one that's red, I stop. What God's asking you to do is start moving in the direction of the green light that He's put right in front of you. You don't know where this is going to take you, but by faith, you start following the light God has given you. Like those ancient Jews who discovered that the waters part when you step into them and not vice versa.

God will give you a green light often through His Scriptures, and those seem to have your name on them, strengthened by other verses that come your way at that time when you're trying to decide. He'll give you the strong compulsion in one direction during the times that you're praying, and He'll give you a sense of peace about that direction. He'll open and close doors circumstantially to confirm what He's been saying to your heart. So, move when the light is green. Keep moving that direction as long as the lights keep turning green. But don't blow past God's red light. Stop when the green light isn't there.

God's will for my life seems so huge, it's just beyond my grasp. But that's OK. It's God's will for my next step that's the real issue anyway. So, let your Lord order your steps; He'll make those obedient steps into His grand and glorious will for your life. But don't wait for all the lights to turn green - for all the questions to be answered. They won't turn green until you start moving past the green light that's right in front of you.