"I looked in their eyes...and I felt their brokenness." 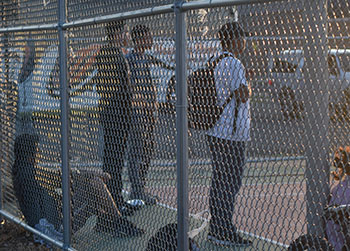 Those were Cindy's (Navajo) words as she surveyed the crowd just before she shared her Hope Story. Which turned out to be one of the most powerful God-moments of this amazing Summer of Hope. More on that later.

There's plenty of broken to feel here on the Boundary Line Reservation. A tribal official called it "a reservation in crisis." With an explosion of the hardest drugs and drug overdoses - too many of them fatal. Children vanishing. Sex trafficking. And so many suicides.

And as a third of our team was trailblazing in remote communities to the north, the Boundary Line team faced a unique challenge. They were not allowed to do the door-to-door canvassing that we depend on to spread the word and build our crowd.

This reservation is the epicenter of the centuries-old beliefs that permeate many reservations in this region. The spiritual walls are high here. Even around individual hearts. But while we could not go door-to-door, we were miraculously granted permission to use a basketball court right on the main drag.

Still, the warriors had to fight to bring in the lives they were sent to rescue. Waving signs by the road. Getting permission to hand out flyers at the rez store. Urging those who drifted in to text or call friends. Slowly but surely, Boundary Line young people started filling the court. Where the warriors created a welcoming climate that made them want to come back. 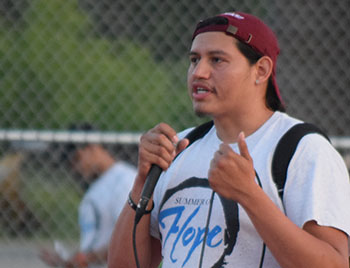 Just before he gave the Night Two wrap-up, Shawn (Cherokee) came to our vehicle for special prayer, knowing the spiritual resistance he might encounter with a Boundary Line crowd. It was the most powerful Gospel presentation he's done! Something happened when he got out there.

We could tell. He said things he'd never said and didn't plan to say. Powerfully reaching right into the deepest needs of hearts there. Later, he said God had broken his heart for these people - and totally taken him over.

We could tell. And when he asked people who wanted this Jesus to pray with him a "Jesus, I'm Yours" prayer, about one out of four people there wrote that they had. Hard-to-reach Boundary Line young people!

We knew the real battle would come on our final night. When our speaker would ask people to publicly acknowledge Jesus as Savior. As one local believer said, "It will cost them if they do."

But they did. Led by some of the big guys. The basketball players. And the girl whose boyfriend tried to stop her, saying, "I'm afraid." But they both walked to center court, declaring their commitment to Jesus. 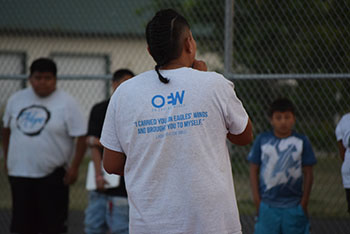 One girl's brother defiantly asked his sister if she believed what this team was saying - "We have our own religion." She responded, "This is not a religion - it's a relationship! And they have hope!"

Brent (Nez Perce) told us tearfully about the homeless man he met that night who "had nothing" but what was in his backpack. His family will have nothing to do with him. He was the picture of despair. That night, he left with Christ in his heart, the promised help of a Boundary Line believer - and the shoes Brent gave him.

Brad and I felt that the turning point that night had been when Cindy (Navajo) gave her Hope Story before the wrap-up. She's done that before, but never like this. When I prayed with her, I felt led to say, "Ask Jesus to help you feel what you felt when you were lost. Then what you felt when you first met Jesus." And she did - in front of everyone. With heart-searching pauses and evident emotion, she told about the abuse in her family, the rejection that convinced her she was worthless. And the plan to end her life.

Until she found Jesus on a night when On Eagles' Wings came to her reservation three years ago. It's been a long time since I felt the presence of Jesus so powerfully take over a reservation court. And, a few minutes later, an invitation to publicly choose Christ.

It was an emotional moment when all those Boundary Line folks set their fear aside and stepped out to declare they wanted Jesus. We had to fight for every one of them - even to have them there. It was a powerful breakthrough in the power and Name of Jesus.

A victory we'll need to remember as our team comes together for our final - and potentially most challenging - reservation of this summer.