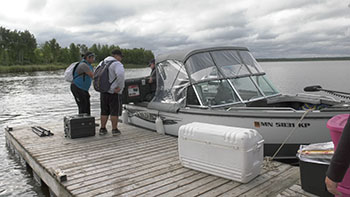 I truly believe that our small team of 13 had the opportunity to be like Jesus to these two isolated reserves in Canada. This was answered prayer for our local host who had reached out to us about seven years ago, asking what it would take to bring the On Eagles' Wings team there. But like always, God's timing is perfect.

These two reserves are just across the border but, like many First Nation reserves, these present quite the challenge to reach. The only way to get to these First Nation reserves is by way of ice road in the winter when the lake freezes, or by snowmobile or boat. Since this is the Summer of Hope tour we had the awesome experience of traveling by boat. At one point, as we were loading all of our sound equipment, food, luggage, etc. I couldn't help but start laughing. When we started to bring the stuff over the water and unload on the dock, it was one of my God moments of this summer. What a humbling and "only God" experience that a small team of Native American and First Nation young people were doing whatever it takes to reach the lost. 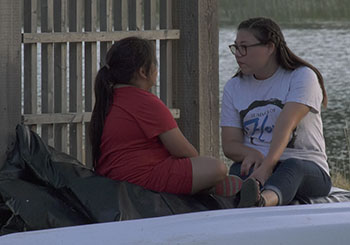 Both of these reserves are beautiful. The team was really welcomed by some great people. But what the team also met were people in need of a savior. Despite the communities being isolated, they both faced the challenges of drugs, alcohol, depression and other things that our team knows all too well. We had a chance to see that a Native young person from a rez hundreds of miles away can relate with a First Nation person about being broken. Within the beautiful scenery, there were places without hope - broken bottles, busted out windows, boarded up homes and hearts that were searching. Neither community had any law enforcement or a hospital locally. I can only imagine the amount of things that go unreported. One community had more people that were rooted in the traditional religion. The other community was more self-serving and living with no general beliefs. But both of these isolated reserves got a chance to see a team of Native young people that talked about a brown-skinned Savior who loved them enough to die for them. What was seen on those reserves was historical in the fact that neither place had seen any Native American or First Nation young person talk about Jesus. Each place heard stories of abuse, drugs, attempted suicide, broken homes, and scars just like theirs. But the stories they heard didn't end there. They were forever changed because of Jesus. They saw - talking on their remote rez - the people behind the stories that were now filled with life, purpose, love and HOPE because of what Jesus did. 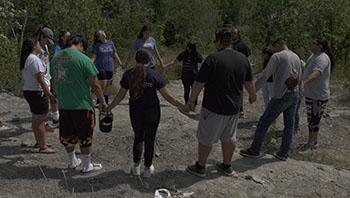 What a blessing it was for us to come alongside the ongoing ministry efforts of our local host. And to be able to walk away from that place knowing that these people who heard the gospel will continue to be poured into. From now on, the people on these islands will remember that Jesus' love and hope showed up there in people just like them. When God so loved the world, He loved them! If our team had only been able to share the Gospel it would have been worth it. But God, in the way He works, allowed for our team to see a number of people indicate that they began a personal relationship with Jesus. All glory to God!