"If you don't see me here anymore, it's because I was shot." - 11-year-old to a youth leader in the Ironwood Native community

Sadly, that's life in Ironwood. A violent urban "rez" where there is a constant bombardment of drug overdoses, gang activity, violence and death. It's not an exaggeration to call it a war zone. 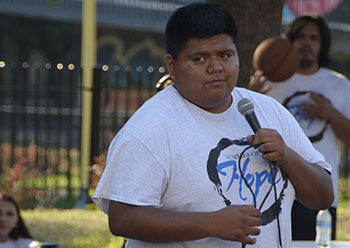 The leader who shared that comment is one of the team that invited On Eagles' Wings to Ironwood. In a team meeting, he choked up as he said, "It's hard here. Day after day, another overdose, another shooting, another funeral. But now On Eagles' Wings has come - and this is a dream come true!"

Our mission there began with canvassing - the door-to-door inviting we do before our first event. But it's different here. Some folks live in apartment-style public housing. One of our local hosts advised the team that they might encounter people high on drugs in the hallways. We stationed a leader at the end of each hallway to make sure each warrior stayed safe.

We were blessed to have our events right in the parking lot of a major housing area - essentially in Ironwood's "front yard." Across the street, was the park, the site of many drug deals, assaults, gang clashes and violent deaths. Where one young man we had trained for youth ministry was stabbed to death a few years ago. We were in the heart of the hurt of Ironwood. With the hope of Jesus.

In spite of an intimidating environment and crowd, the warriors were soon in those individual conversations that are the life-changing core of On Eagles' Wings rescues. 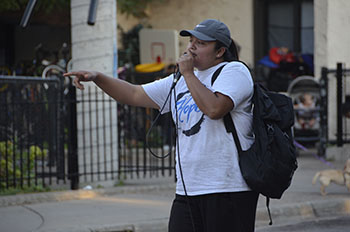 Even in the face of some very hard-core guys, Rachel (Navajo) dominated that parking lot as she boldly told her story of betrayal and sexual abuse, her hatred of all things Christian and her turn to Jesus on the day she had the gun to her head to end her life.

As she powerfully shared the life-changing love of a crucified and risen Savior, you could almost feel hard hearts turning soft. Later we would learn that one of five of the Ironwood people there had followed her in a prayer to begin a relationship with Jesus! An amazing response in a place with such high walls around those wounded hearts.

We went into our final night "storming heaven" for a public breakthrough in Ironwood. It would have to be God. Because the unwritten survival code is to never show feelings or do anything that might make you appear weak. Fear alone could well keep them from taking a public stand.

It didn't. As the invitation was extended to come to Christ, they came from all directions! Without hesitation. With the big basketball guys the first ones to come. Against the war-torn backdrop of Ironwood, this public choosing of Jesus was nothing short of a miracle! 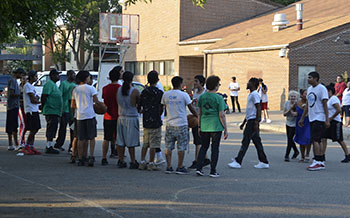 Every day, these people walk through that lot. That miracle night in this "front yard" of the community will be remembered as the place Jesus showed up in Ironwood!

And everyone could tell that He did. So many told our warriors, "I can't believe the peace here. Normally, the park would be filled with drug dealers, drugged-out people, all kinds of craziness. And this lot would be all crazy, too. But for two nights the park has been totally empty. And there's peace here."

The peace of Jesus had subdued every force of darkness those nights. A peace brought by His warriors of hope. A peace that now lives in the hearts of the embattled people who meet Him there.