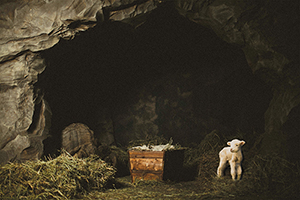 Every year, about this time, Linus comes marching on stage with his trusty blanket. And he uses a passage from the Bible to help poor ol' Charlie Brown understand "what Christmas is really all about."

..."And she brought forth her firstborn son, and wrapped Him in swaddling clothes and laid Him in the manger."

Until recently, I had no idea how loaded those words were.

Meanwhile, an angel roars in over shepherds watching their sheep and announces, "I bring you good tidings of great joy ... Today in the town of David (that's Bethlehem) a Savior has been born to you ... this will be a sign to you: you will find a babe, wrapped in swaddling clothes, lying in a manger."

I doubt that Linus - or certainly the guy writing this - had a clue about the bombshell in the manger. A stunning revelation that, for all my years going over the Christmas story, I had totally missed. Now, my discovery has made this "most wonderful time of the year" even more wonderful!

Bethlehem was only about five miles from Jerusalem. Where the great temple of God was. Where, for centuries, people would bring a spotless lamb as a sacrifice for their sin.

It is widely believed that the Christmas shepherds were raising temple sheep. Destined to be the blood sacrifice for the sin of the bringer.

Here's what I'm just learning after all these years. When a lamb was born, the temple shepherds would carefully examine him to see if he had any blemishes. If that lamb was without spot, they would ...

Wrap him in cloth strips called swaddling and lay Him in a stone manger, filled with straw.

Suddenly, heaven announces that the newborn Messiah would be found "wrapped in swaddling clothes, lying in a manger." Imagine what that said to them. The newborn Messiah was, in a sense, a lamb. A spotless lamb. To be sacrificed.

In the northern corner of the "little town of Bethlehem," there stood a tower. Called in Micah 4:8, the "watchtower of the flock" - or Migdal Eder in Hebrew. It is thought to be that when a ewe of the temple flock was ready to give birth, the shepherds would carry her to the cave beneath the tower. And there, the sacred temple lambs were born.

This is where I fasten my seat belt. The angel told the shepherds that the sign by which to identify the newborn Messiah would be a swaddled baby in a manger. I've always pictured those poor herders sort of playing Christmas hide-and-seek, looking for a baby that fit the description.

Wrong! The Messiah would be wrapped and mangered - just like those spotless lambs, destined for sacrifice. It's likely they went as fast as their sandals could go to Migdal Eder. To the cave where it's believed the sacrificial lambs were born!

That baby in the hay was, indeed, the Lamb. God's Lamb.

When John the Baptist introduced Jesus to the world, he didn't say, "Look! The King of kings" or "the Son of God." He said, "Look! The Lamb of God who takes away the sin of the world" (John 1:29).

This is the breathtaking Plan that had been in God's mind since before the world began - down to the swaddling clothes and the manger. Lambs sacrificed to graphically tell us that sin carries a penalty that can only be paid by death. Preparing the way for God's Lamb. Who came to do all the dying for all the sinning of every one of us. For me. I can hardly write those words.

And the Bible tells us that one day we who belong to this Jesus will join a hundred million angels who are worshiping Him in heaven. And who are singing the anthem of heaven. "Worthy is the Lamb that was slain!"

Heaven can't get over the price God's Lamb paid for us rebels against Him. Neither can I.

Sources for information on the shepherding and swaddling practices:

An additional source for the swaddling information is found in the book, "Unlocking the Secrets of the Feasts" (pp. 5-7), by Michael Norten. This writer cites Edersheim, as well as archaeologist, Bob Ibach, as sources.