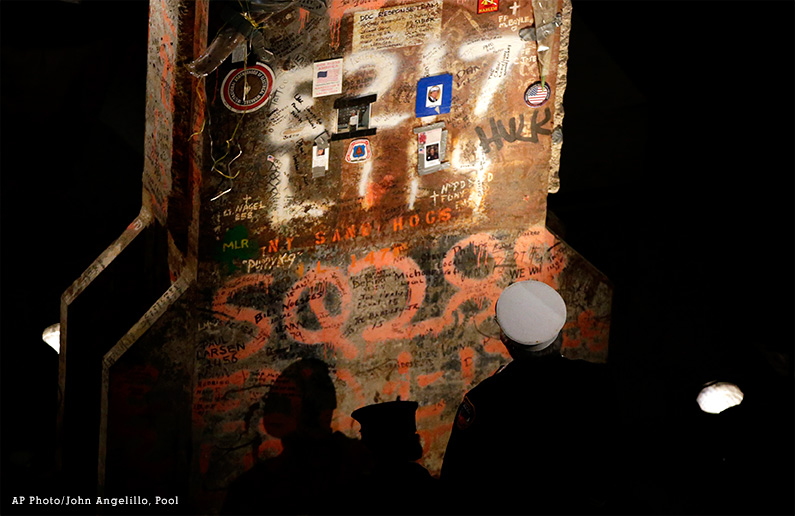 As you walk in, you hear last “I love you” messages people sent from the towers or the doomed planes.  It’s a heart-rending walk through this nation’s darkest hour.  And the heroism and hope that lit up that darkness.

Like the man President Obama spoke about at the dedication service.

After the wingtip of a hijacked plane sliced through the 78th floor, a group of people were huddling together in the Elevator Sky Lobby, waiting for help.  Then they heard the voice.

“I found the stairs – follow me,” he said.  It was Welles Crowther, an equities trader – whose trademark was the red bandanna he’d carried in his pocket since he was a boy.

With a woman on his back and a red bandanna in his hand, he led the group to a stairwell.  He gave one woman a fire extinguisher, told the group to stay together and continue down the stairs.  They made it out.

Welles didn’t go with them.  He went back upstairs to help others.

That’s when another woman, badly injured, saw a man with a red bandanna over his nose and mouth, running across the lobby.  He led them to an obscured staircase – and went back for others.

Then the tower came down.  They found Welles Crowther’s body six months later.

His red bandanna is on display in the museum.

His last hour was on a cross.  Where He bled out His life to save people who would otherwise have died.

I’m one of them.  All of us whose sins were paid for on that day are His legacy.  As the Bible says, Jesus “loves us and has freed us from our sins by His blood…He gave Himself…to rescue us” (Revelation 1:5, Galatians 1:4).

Jesus came where I was one day and said, “I have the way out.  Follow Me.”  Following Him saved my life.  And my soul.  Me, and the millions who’ve accepted that invitation.  “Follow Me.”

There’s one stop in the Ground Zero museum that is reportedly one of the most moving.  I know I’d be spending some time there.

The construction worker who found those girders in the shape of a cross said, “My one goal was to find someone alive.  I didn’t.  But I found the cross.”

The rubble cavern where it was found came to be known as “God’s House” to the hope-starved workers at Ground Zero.

It was a Ground Zero chaplain who brought the hope found there right into our own hope-hungry lives.

He said, “When the ground is shaking all around you, find your cross at your Ground Zero.”

I did.  It’s the ground that never moves.  It’s the Love I will never lose.

It’s the only safe place.  For now.  Forever.