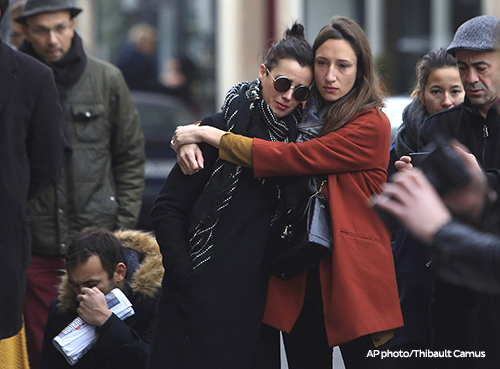 As I watched heartbreaking scenes from last week's terror attacks in Paris, my mind flashed back some 22 years.

The morning after the 1993 bombing of the World Trade Center, I flew from New York to speak in another city. To my surprise, we were greeted by a TV crew, asking, "How are New Yorkers feeling after this attack?" They came to me first.

Let's see...first word that comes to my mind. "Vulnerable." That was it. We all suddenly felt very vulnerable.

Fast forward to November 2015. And put an exponent next to that "vulnerable." Not just in one city. But around the world. Terror has metastasized.

The American President says, "The sky has darkened." The Pope says we are now in "a piecemeal World War III." Vulnerable isn't just a feeling. It's a disturbing reality.

For example, our almost total dependence on vulnerable cyber technology - without which we would be paralyzed. And our interconnectedness with a "house of cards" world economy. And hackers, identity thieves and terrorists moving faster than the systems devised to stop them. And...

We are vulnerable. There's a lot of fear. With reason.

But there's also safe harbor. Not in the events we can see. But in the "something bigger" - the larger tapestry of which all our uncertainties are threads. The threads bring fear. The tapestry spawns faith.

It's a faith that's powerfully revealed in the time-tested wisdom of the Bible. And rooted in a perspective that sees the panoramic backdrop for all the fear factors around us.

That perspective is called "eternity." As one Bible writer says, "We don't look at the troubles we can see now; rather, we fix our gaze on things that cannot be seen...the things we see now will soon be gone, but the things we cannot see will last forever" (2 Corinthians 4:18 - NLT). Things look different through eternity glasses.

From the observation deck of "forever," we can see three lights in our darkening sky.

No matter how wild our roller coaster ride is, our car is anchored to a track. That track is the larger plan of an unstoppable God, revealed in Biblical prophecies of where this all goes.

First, "nation will rise against nation...the nations will be in turmoil...people will be terrified." But then, everyone will see the Son of Man coming on a cloud with power and great glory (Luke 21).

Terror. Turmoil. Then the triumph of Jesus' return. No leader, no army, no terrorist will write the final chapter. Jesus will. Whatever tonight's news, "the Lord reigns!" (1 Chronicles 16:31).

Are things spinning out of control? Ours? Yes. His? Never!

Whether or not wrongdoers are "brought to justice" on earth, God's greater justice is inescapable. "Man is destined to die once, and after that to face judgment" (Hebrews 9:27). And, "will not the Judge of all the earth do right?" (Genesis 18:25).

Time will not right all wrongs. Eternity will.

In tornado country, when the dark sky turns deadly, people head for their "safe room."

I know where my safe room is in a menacing world. "Nothing in all creation will be able to separate us from the love of God that is in Christ Jesus our Lord" (Romans 8:38-39).

There is an unshakeable anchor for the soul. The unloseable love of Jesus Christ. Love proven by His life sacrifice for our sin on a cross. Guaranteed by His victory over death at His empty tomb. Disaster-proof. Terror-proof. Death-proof.

The storm is intensifying. But the Safe Room is open.