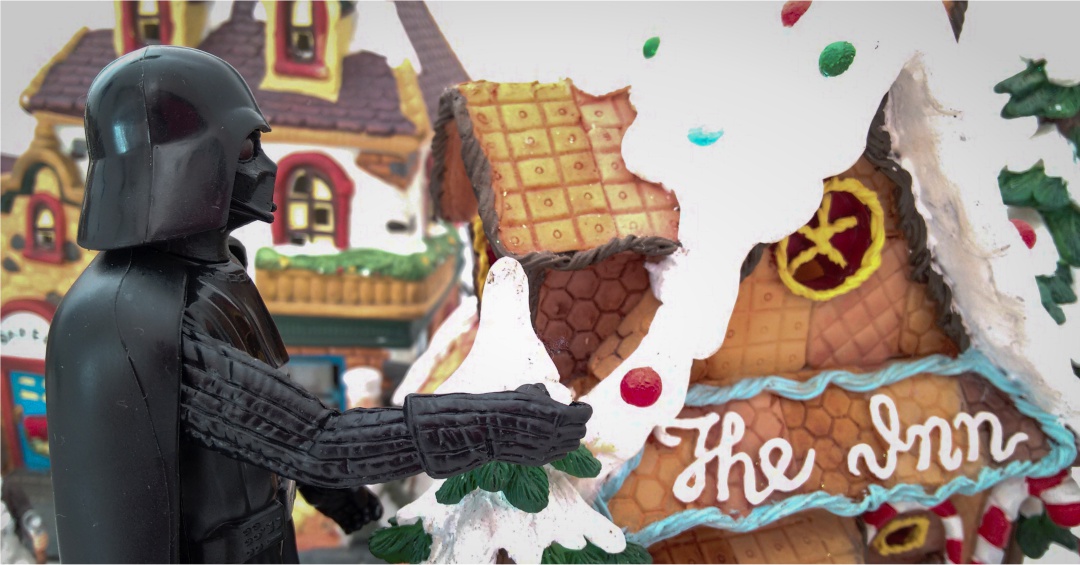 There's a Nativity in every room of our house. That was my wife's #1 order for Christmas decorating. Decorations are fine. Lights are nice. Nativities are mandatory!

So we have all kinds. Big mangers. Small mangers. Native American Nativities. A cowboy creche. An Eskimo "Bethlehem." The cast is pretty predictable. Mary, Joseph and the baby are there. So are the shepherds and those Wise Men. Sometimes a cow. A donkey. A sheep.

But there's one prominent character in the Christmas story who's never at the manger. What bothers me is that in some ways, I'm him. We all are.

The king. Herod. No way you're going to find him where Baby Jesus is.

That's not an oversight. That's history.

King Herod is the "Darth Vader" of the Christmas story. I nominate Mr. Vader as "The Villain of This Generation." He's heartless, he's merciless, and he talks scary. Even after his death in an earlier "Star Wars" episode, his evil legacy carries on through his better-breathing grandson, Kylo Ren.

When it comes to the historical events that are contained in the Christmas story, King Herod is clearly the "dark side."

It's the quest of those "Wise Men," aka, "Magi" that brings Herod into the story. The Wise Men believed that the amazing star they had seen was a celestial sign leading them to the long-prophesied "King of the Jews." So wouldn't the palace of the reigning "king of the Jews" be the logical place to look?

Needless to say, Herod was not happy to hear a question like, "Where is the one who has been born king of the Jews? We saw his star when it rose, and have come to worship him."

When Herod's prophecy experts cited the Old Testament prediction that the Messiah would be born in Bethlehem, Herod asked the Magi to bring back actionable intel on where the new "king " was. He claimed he wanted to worship the newborn Messiah. What he wanted was to kill him. Thankfully, God warned them away from that bad idea.

But Herod proceeded to send his "hit men" to slaughter every baby under two years old, in and around Bethlehem.

Now why would I say that I am, in any way, like this monster? Certainly not in his heinous homicides. But something deeper. Herod's heart.

At his core, three words captured the bottom line that drove his life.

The heart of Herod was that no one would replace him on the throne. Even God's Messiah.

That's what troubles me. Because, according to the Bible, that's the choice we've all made.

I want to be king of me. I want to do what I want to do. I will not yield the throne. Even to the One the Bible says is "the King of kings."

Oh, we've got lots of so-called reasons for refusing to bow to Jesus. Hypocrites. Questions. Our good works. Our religion.

But our real bottom line is...

We'll give God all kinds of things. Money. Time. Belief. Everything except one thing. Control. Whoever or whatever is in control is our real God.

But the results of our "self-rule" testify that we were never meant to run our life. Broken relationships. Wounded loved ones. Addictions. A deep loneliness and emptiness that no accomplishment or achievement has been able to fill. And still no answer to life's #1 question - "Why am I here?"

But all this brokenness is the very reason for the Manger! And the Cross. And Jesus' empty tomb.

"Jesus" means "the Lord rescues." And rescue is what I need! Not a religion. A rescue! His earthly father Joseph was told to name Him Jesus because "He will save His people from their sins" (Matthew 1:18).

All these frustrating, unfulfilling, searching years have been a battle over the throne in our heart. A throne reserved for only one King. The One who created us. Who loves us more than words can tell. Who died to remove the death penalty for me trying to be my own king. Who alone has conquered death.

No, I will not stand with Herod, resisting the Rightful King.

I will kneel with the Wise Men this Christmas. The ones who "bowed down and worshiped Him" (Matthew 2:11).

My lifelong search ends where theirs did.

At the feet of Jesus.