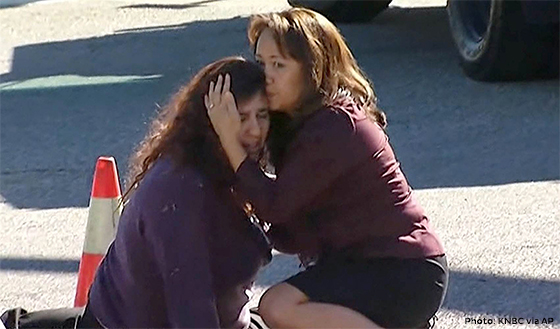 The news was awful. Then, I heard those three life-saving words that sounded strangely familiar.

One of the wounded was Denise Peraza. But for the heroism of coworker Shannon Johnson, she would probably have been one of the fatalities.

As the party suddenly turned into a killing field, Denise and Shannon took cover under a table. She said, "I will always remember his left arm wrapped around me, holding me as close as possible next to him behind that chair."

Then those three life-saving words. "I got you." They were his last words. As the shooters approached, he covered Denise's body with his. And gave his life to save hers.

One news report put it this way - "To Peraza, he was her savior."

Savior. That's a deeply personal word for me. Especially with Christmas this close.

In the Bible's account of the first Christmas, it says, "Unto you is born a Savior, which is Christ the Lord."

I swallowed hard when I read about that "savior" sacrifice on that dark day in San Bernardino. Because that's what saved me.

The bloody day when Jesus - the only Son God has - died so I wouldn't have to.

Not because I was such a good guy. But because I was such a bad guy. Beneath all the religion and right living, a self-centered rebel against God. In decision after decision, action after action, pushing the God of the universe aside to do whatever I want to do. Selfish things. Lying things. Dirty things. Hurting most those I love most.

But love intervened. Amazing love. In the Bible's mind-blowing words, "The Son of God...loved me and gave Himself for me" (Galatians 2:20). Literally, putting Himself between me and the unspeakable judgment I deserve. Giving up His life to give me life.

"He loves us and has freed us from our sins by His blood" (Revelation 1:5).

There was a day when it finally dawned on me that what Jesus did on the cross wasn't just for the world. It was "for me."

That was the day Jesus put His arm around me. And said those words.