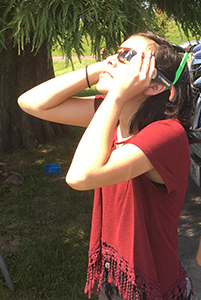 Seasoned reporters were groping for words. And almost giddy about what they were seeing.

The former commander of the International Space Station - moved beyond his scientific detachment - testified to a sense of "ancient wonder."

The eyes of a nation were turned skyward this week. In their special eclipse glasses. As God did - as He has done for millennia - His disappearing act with the sun again. A total solar eclipse eclipsed even the usual newsnami from Washington.

It was fun watching people watch the cosmic blackout. And listening to their roaring cheers as their location went dark with "totality."

I couldn't help but think of something in the Book of Job that always puts a smile on my face. Job, still reeling from the staggering loss of loved ones, health and wealth, is celebrating the immensity of his God. As revealed in His creation.

Job refers to how God "spreads out the northern skies...wraps up the waters in His clouds"...and "marks out the horizon." How "by His power He churned up the sea"..."by His breath the skies became fair"...and how He makes "the pillars of the heavens quake."

Here's where I smile. Job says, "These are but the outer fringe of His works" (Job 26:14). Hilarious. All the breathtaking images that have come back to us from the Hubble Telescope - including the likelihood that there are two trillion galaxies! "Oh, that's just the beginning, folks! You ain't seen nothin' yet!"

His spectacles in the heavens are sending a simple message to every man or woman He created. "I'm God. You're not."

An eclipse is a big deal to us. And it should be. But to my Father, it's just part of the normal rhythm of a handful of heavenly beings in one of His two trillion galaxies.

Yet, there - third planet from the sun in this one galaxy - God Himself came down. As a man like us. To a people who had shaken our fist in His face and said to a person, "When it comes to running my personal universe, I'm God. You're not." In the Bible's words, "Each of us has turned to His own way" and "all have sinned and fall short of the glory of God" (Isaiah 53:6; Romans 3:23).

Result. A total eclipse. Plunged into an awful soul darkness as our sin has come between us and our Creator. A darkness that will last for all eternity. "Without hope and without God," the Bible says (Ephesians 2:12).

Except for The Visit. The stunning descension of the God we had spurned coming down from the mountain to live among us. To die as one of us. By His choice. On a cross. Where He bore the hell that my sin deserves.

Our eclipse experience this week as a nation lasted about three hours. Two thousand years ago Israel experienced a long, three-hour darkness that changed the world. "From the sixth hour until the ninth hour (12:00 PM-3:00 PM) darkness came over all the land. About the ninth hour Jesus cried out in a loud voice, ‘My God, My God, why have You forsaken Me?'" (Matthew 27:45-46)

In that moment, God the Father turned His back on His Son - because He was carrying my sin. So He would never have to turn His back on me. That is love beyond words.

It got darker than it's ever been. So we would never have to live in the awful darkness away from God again.

I remember the day the Sun came out for me. The day Jesus came in. That Sun of God's love has never eclipsed since. Even on the harshest, hurtingest, darkest days of my life.

And one day I shall see Him face to face. When every eye on this planet will be looking skyward. Because Jesus "is coming with the clouds." And "every eye will see Him."

Ready or not, here He comes!